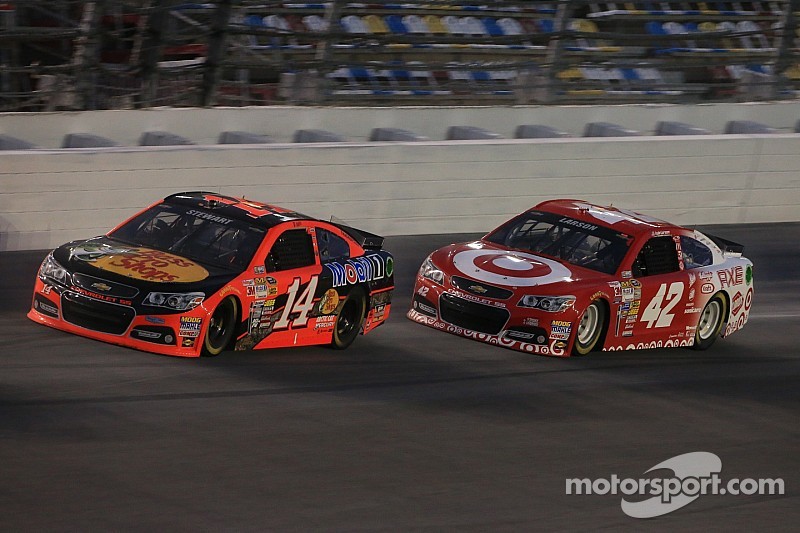 If you could pair up any young gun with a NASCAR veteran, what would your pairings look like?

Earlier this week on my show we got to talking about some of the young talent in the Nationwide and Camping World Truck series. As we saw again at Eldora with Darrell Wallace Jr. putting on a 'smooth as silk' show, taking the win over hell-bent for concrete Kyle Larson; these guys are compelling, fun to watch and ready to drive eye-balls to the sport of NASCAR.

We decided it would be fun to do a draft of some of these guys and see who folks would pick and in what order. The only stipulation is that you have this driver on your race team for the next ten years. No trades, no cuts, you can’t even make them go sit by Kyle Petty on TV. They are yours for a decade, win or lose, boom or bust.

So, who would you go with out of a group that includes Kyle Larson ( yes, he’s in Cup now but still can’t legally buy a beer next time he wins) Chase Elliott, Darrell Wallace Jr, Ty Dillon and Ryan Blaney. We thought about putting Austin Dillon in there but figured he’s already established enough at Cup level to be a bit ahead of this group on the known factor.  Out of these drivers you have points leaders, guys with multiple wins at a young age and a level of media savvy I don’t think we saw when the Harvick, Kenseth group came up 15 years ago, and certainly not when a Jeff Gordon arrived on the NASCAR scene in the late 1800’s….ouch.

We decided not to stop there.

We ask the question now, which older driver would you partner up with some of these guys as a Mentor? All of these younger drivers need all the help they can get. The struggles and set-backs will come. Not just on the track, but more importantly off the track. Older drivers can help. They often do.

As for me, my pairings would look like this.

Darrell Wallace Jr. gets Dale Earnhardt Jr. as a Mentor. Wallace Jr. is going to have a ton of fans. He will also have a ton of people projecting on to him things they want him to be. Or hope him to be. Or expect him to be. Sound familiar, Dale? I think Earnhard Jr. could be a great help to Bubba when it comes to dealing with all the trappings of being looked at all the time as a go-to-guy for comments on situation in the garage or around the sport. So far Wallace Jr. has embraced it. He’s got a lot of class and understanding for someone his age.

Kyle Larson gets Tony Stewart for his Mentor. An easy decision, I know. From their back ground to driving style, they’ll have plenty to talk about. The older, more mature Stewart can also help Larson avoid many of the pitfalls Stewart experienced while growing his career in NASCAR off the track. Imagine where Stewart might be if he hadn’t wasted a few seasons trying to drive angry? Come to think of it, maybe Larson should mentor Smoke....

Chase Elliott gets Joey Logano for his Mentor. Why? That doesn’t make sense. They’re the same age. I think Logano can help Elliott transition to Cup when the time comes by helping him understand how hard it is to go from winning on Saturday to winning on Sunday. Make no mistake, Logano was rushed so some of this was unfair. Elliott won’t be rushed. He will get to Cup and find out like nearly every driver ever that it just doesn’t always translate as quickly as you want it to. Logano can speak to the patience of getting in the right spot with the right people and letting it come together. Why not his dad, Bill? Come on! Who listens to their dad at his age!!!

The younger Dillon and Awesome Bill

Ty Dillon gets Bill Elliott as his Mentor. Yep, Bill needs someone to tell what it was like to rule the world for a few years. Since Chase won’t listen (we’re kidding here), Bill needs to dole out racing and fatherly advice to someone who knows the business and can relate. Guys like Elliott need to be around drivers, in my opinion, who have a built-in respect for the history of the sport and what came before them. Ty Dillon understands that.

Ryan Blaney gets Brad Keselowski for his Mentor. Ya, that’s cheating. He works there. Sometimes things just fall into place. With both coming from hard-core racing families, you know they speak the same language. We already see their driving styles complimenting each other. The idea of Keselowski having a built-in guy to grab some beers with is also a plus here. This also takes the pressure off of Dave Blaney.

My name's Ryan Hyatt and I'm on the radio. Catch us every Monday night at 7pm est. where Motorsport.com manager Nick DeGroot stops by to debate some of the hottest topics in the world of motorsports; click HERE to tune in.