The year of Jeff Gordon 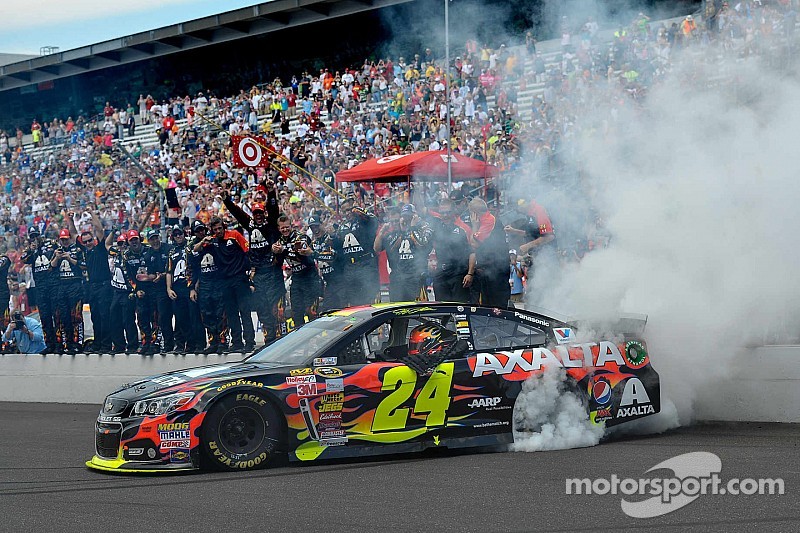 Prior to Gordon winning a record fifth Brickyard 400, team owner Rick Hendrick prognosticated that Sunday would be his veteran’s drivers ‘day’.

With the way the No. 24 team is running right now, it could also be Gordon’s year.

The Drive for Five

After Gordon won his fourth NASCAR Cup title in 2001, his performance convinced many that the champion’s run was far from over.

If anyone had the talent and the poise to break the seven championship record set by Richard Petty and Dale Earnhardt, it was the 30-year-old Hendrick Motorsport driver.

But when asked during pre-season testing in 2002 whether he could be the one to win eight titles, Gordon insisted he would not be racing long enough to accomplish that goal.

Clearly, he was wrong. Perhaps his desire just wasn’t there at that time. Perhaps he didn’t have the necessary catalyst to inspire him. Perhaps that was about to change.

Gordon’s first marriage was unraveling at that time. Later that summer, he would meet Ingrid Vandebosch. They wedded in 2006 and welcomed daughter Ella the following June. Son Leo joined the family in 2010.

Since then Gordon has found the proper balance between his personal and professional lives.

But as integral a part as motorsports has played in Gordon’s life, it’s far more important to have the ability to share the experience with the people that mean the most to him.

“These two guys beside me definitely played a big role,” Gordon said, referring to crew chief Alan Gustafson and Hendrick, who flanked him on the dais following the win. “My wife and kids play a big role.  Seeing them experience coming to the racetrack, experiencing me and this team in Victory Lane.

“My son wasn't real thrilled today, but my daughter was. Those things kind of change your perspective on what's important to you, how much effort you want to put into something.”

My wife and kids play a big role.  Seeing them experience coming to the racetrack, experiencing me and this team in Victory Lane.

By the time Gordon turned 30, he had already won his four Cup titles. He had won 58 of his now 90 career wins. And after the Chase was introduced in 2004, Gordon would qualify for all but one of NASCAR’s system and only failed to finish in the top10 in the point standings in 2005.

But it was also after that last championship in 2001, that his new teammate Jimmie Johnson arrived on the Cup scene.

You feel like you've kind of won all that you could win, you've won four championships, then a guy like Jimmie Johnson comes along and starts dominating, you kind of lose the motivation

“You feel like you've kind of won all that you could win, you've won four championships, then a guy like Jimmie Johnson comes along and starts dominating, you kind of lose the motivation,” Gordon said. “I think between conversations I've had with Rick, with Alan, coming so close, winning the championship, the drive that he has, that work ethic that he has, how good the racecars are, I don't want to be the weak link.  So it's pushed me to give more, do more, work harder.

“She's like, ‘Whatever it takes’. That's the kind of year that we're having.  We're just putting everything we possibly can into it.”

Yes, with all the support that he has right now, it might just be Jeff Gordon’s year.

At age 42, Jeff Gordon shows no signs of slowing down

Joe Gibbs Racing looks to get back on track