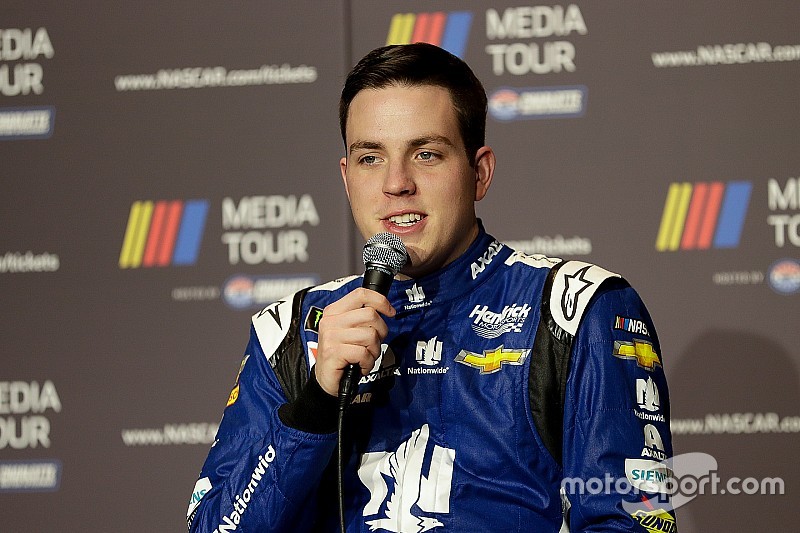 It’s certainly not because the driver of the No. 88 Hendrick Motorsports Chevrolet shares the late racer’s flamboyant lifestyle. The 24-year-old Tucson native despises his more familiar nickname, “Bowman the Showman."

However, if the comparison has anything to do with Bowman’s driving style, he’d be perfectly happy with that.

“I hope so because Tim could get after it pretty good,” Bowman said. “But I really don’t know why Mr. Hendrick calls me that. I don’t know if he heard I was a fan, or if he sees some similarities. I don’t have a clue. It just kind of started one day. But it’s pretty funny, for sure.”

Hendrick was impressed when he learned Richmond was Bowman’s favorite driver. The boss man also noticed Bowman’s raw speed and no-fear approach. In 2016, when Dale Earnhardt Jr. was sidelined with a concussion, and Bowman was recruited to sub, he was solid in his audition. Bowman earned the pole at his home track—ISM Raceway—and scored three top 10s and led 200 laps in 10 starts.

Doing it their way

At his home in North Carolina, Bowman has a shrine honoring Richmond, James Hunt and James Dean. His latest acquisition—a Christmas gift from his girlfriend, features a framed collage of signed Richmond memorabilia.

“It’s pretty old,” Bowman said. “It’s from when he drove the 27 car for Raymond Beadle. I know signed stuff from him is really rare and really hard to find. It’s pretty special, for sure.”

While Bowman wasn’t born until nearly four years after Richmond died due to complications from AIDS in 1989, he appreciates legendary figures who lived life on their own terms.

“I like the guys in history that have been able to do it their way and have a little more fun with it —than most,” Bowman said. “Not take it so seriously. When you look at guys like Tim Richmond, James Dean, James Hunt...guys that still have been really successful but have had fun along the way.

“It’s cool to see guys that have been able to do it that way. I kind of look up to them a little bit, because I don’t like to take life too seriously.”

Like Richmond, Bowman also came through the open-wheel ranks before moving to stock cars. At age seven he started in quarter-midgets. He amassed nine national championships and 165 feature wins over the next six years. In 2009, Bowman earned rookie honors in USAC Midgets, but an accident the following year became the catalyst for moving into full-bodied stock cars.

Richmond’s breakout season in NASCAR came during his first year with Hendrick Motorsports. While he enjoyed marginal success driving for D.K. Ulrich, Jim Stacy and Raymond Beadle, Richmond made his mark in the No. 25 Folger’s Chevrolet after HMS expanded to two teams in 1986. Under the direction of the legendary Harry Hyde, Richmond scored seven wins, eight poles, 13 top fives and 17 top 10s in 29 starts. He also led 1,006 of 8,544 laps raced.

If Bowman’s numbers are anywhere close to Richmond’s in his first full year with Hendrick, he’ll be thrilled.

“I want to win,” Bowman said. “I have huge drive to go win, so that is what I’m going to try to do. I think it’s more of a personal goal than anything. There is not a lot of pressure being put on me from any side. I just really want to win races.”