The Air Titan 2.0, which operates on compressed air, produces 2.6 times the air volume of its predecessor but at less than 10 percent of the air pressure.

The new version of the revolutionary track-drying system NASCAR introduced this weekend at Martinsville (Air Titan 2.0) will cut drying time from 25 to 50 percent, based on atmospheric conditions, but that’s hardly the full story.

Perhaps the most impressive aspect of the upgraded version of the system introduced in February 2013 at Daytona International Speedway is the anticipated savings in fuel consumption and the dramatic reduction in carbon emissions. 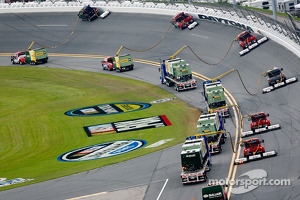 Air Titans try to dry the track during a rain delay

The Air Titan 2.0, which operates on compressed air, produces 2.6 times the air volume of its predecessor but at less than 10 percent of the air pressure.

“It consumes 78 percent less fuel per hour, and when you combine that with the reduced drying time, we actually are reducing fuel consumption on a drying cycle by about 91 percent,” said Gene Stefanyshyn, NASCAR vice president of innovation and racing development.

“We’re emitting 80 percent less CO2 (carbon dioxide), and when you combine that with the shortened drying cycle, we’re reducing CO2 by about 92 percent per drying cycle.”

Under the leadership of chairman and CEO Brian France, NASCAR continues to work at the vanguard of green initiatives in professional sports in its endeavors to reduce the carbon footprint of stock car racing.

“Imagine being asked by your chairman to go to battle with Mother Nature, win that battle and continuously improve over time in a way that they’ve done — and do it greener and in a way that integrates partners that’s completely along the lines of the history of how we’ve built the NASCAR Green platform,” said Dr. Michael Lynch, NASCAR vice president of green innovation.

Air Titan 2.0 also is more compact, with the system contained in a specially equipped Toyota Tundra rather than a large flatbed truck. There are 20 units in the fleet, and they can be deployed to different areas of the track.

The number of units used depends on the size of the track. At .526-mile Martinsville Speedway, eight units are available, along with four jet dryers and an Elgin sweeper. Elgin, with its eco-infused vacuum truck, is a new NASCAR partner.

Denny Hamlin: 'I don't know why people question who I am'

An inside look at NASCAR’s return to Music City