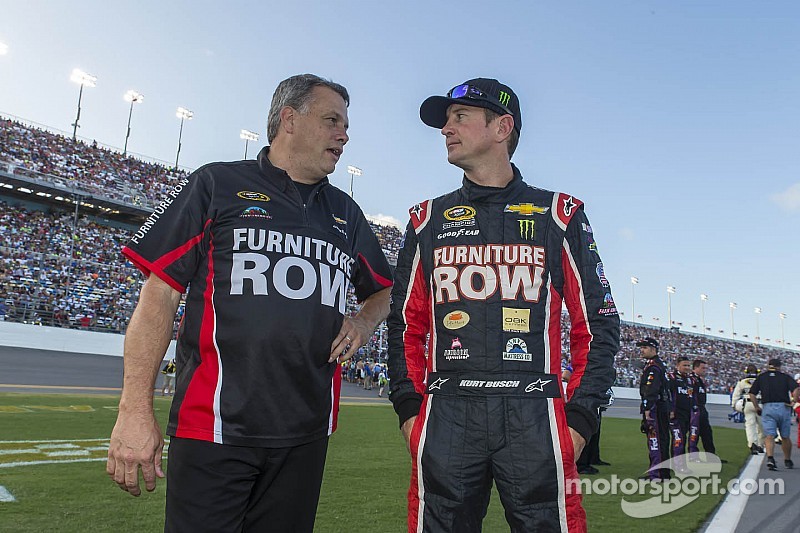 Next month, Todd Berrier will pack his bags for Daytona as he has for the last 25 NASCAR seasons.

But for the first time in three years, the veteran crew chief will be leaving from his home in North Carolina.

Despite a successful run with Denver-based Furniture Row Racing, where he led the No. 78 Chevy team to its first Chase for the Sprint Cup berth with driver Kurt Busch, Berrier’s family was homesick. When Joe Gibbs Racing offered him a managerial role as Director of Inspections in its Huntersville, N.C. shop,  it was hard for Berrier to resist.

“It’s a pretty amazing place so far,” Berrier said on SiriusXM NASCAR Radio. “It’s taken me a couple of weeks to get acclimated to it and to the people there. Right now I’m trying to find my way and figure out where I’m best suited and where I’m going to impact the place the best. Right now it’s a little bit of a moving target, but we’re working at it.”

Prior FRR, Berrier honed his managerial skills at Richard Childress Racing. He was promoted to crew chief for Jay Sauter’s truck effort in 1997. After three winning seasons, Berrier guided Kevin Harvick to the Xfinity Series Championship in 2001. When the pair was reunited on the Cup tour in 2003, Harvick won the Brickyard 400 from the pole and finished fifth in the point standings. Berriers eight career Cup wins came in seven seasons with Harvick.

In 2012, he joined his friend Bobby Labonte at JTG Daugherty Racing. After 19 races, Berrier moved on to FRR where Kurt Busch joined him for the final six races in the Chase.

Getting his hands dirty

For a self-described “car guy”, the new role at JGR suits Berrier perfectly. Not only can the second-generation racer offer “another set of eyes” at the track and in the shop, the opportunity allows Berrier time to step away from a desk and enjoy a hands on experience with the cars.

We’re just focusing on how to turn the battleship quicker than you’re able to turn one.

“As the role of the crew chiefs seems to have changed more and more over the last two years, you have to spend so much times working on the logistics of the teams, the logistics of the rules and the logistics of NASCAR, you’re really disconnected from the car and the moving parts,” Berrier said. “One of the great things about Furniture Row was we could navigate like a speed boat versus trying to move a big battleship.

“When you’re a crew chief in a group of four crew chiefs, you’re trying to make decisions and you’re trying to get everybody on the same page and it just takes a lot of time for things to move. And when NASCAR is making the changes that they’ve made over the last few years, then the target moves that much quicker. We’re just focusing on how to turn the battleship quicker than you’re able to turn one. That’s what my role will be.”

With some of the parts failures JGR has endured in the past and with the addition of a fourth car to be driver by Carl Edwards, Berrier's ability to concentrate on quality control will offer a further layer of protection.

A vote of confidence

JGR’s longest-tenured driver Denny Hamlin considers the addition of Berrier, “one of the most exciting changes we made in addition to the crews this year.”

When you hire people from other organizations, there are different ideas and hopefully, that’s what Todd will bring to us.

“That might be the single biggest change we make all year is Todd Berrier,” Hamlin said. “I think having someone there who was a crew chief last year, walking our cars through inspection, figuring out what we need – observing, just observing other cars figuring out what areas we need to work on to get better. Jimmy does a really good job of that right now but a second set of eyes is going to be big, especially from a guy that just crew-chiefed last year.

“That’s one thing we haven’t done a lot of – cross-pollenating from different teams, hiring from different teams. Usually it’s all internal promotion from Gibbs but a lot of times when you get locked up like that, you kind of live in what your world is and you don’t see what the outside world is. When you hire people from other organizations, there are different ideas and hopefully, that’s what Todd will bring to us.”

On the flipside, Berrier has the chance to work with one of the strongest driver rosters in the history of NASCAR. In addition to Hamlin and Edwards, Berrier will add his touch to cars piloted by Kyle Busch and former Cup champion Matt Kenseth.

For a former crew chief who has worked with dozens of drivers with varying levels of talent, knowing that all four of the Gibbs Cup racers can win on any given weekend was quite the draw.

“When you think about that and look at those guys and what they’ve been able to accomplish and their history of wins and finishes and to have that many great drivers in one place is hard to believe,” Berrier said. “There’s a reason those guys make 80 percent of the money – they make a big part of the difference.

“It’s hard to argue when you look at it as whole that they have the strongest group of drivers.”