Don Schumacher Racing's Tommy Johnson Jr. and the Make-A-Wish team hope to hit the jackpot this weekend when NHRA's Mello Yello Drag Racing Series makes the first of two annual stops at The Strip at Las Vegas Motor Speedway. Johnson, who resides near Indianapolis, Ind., will be charging towards his first trophy of the season in the Terry Chandler-funded Make-A-Wish Dodge Charger R/T at a racetrack where he has experienced success in the past.

The conditions in Las Vegas are somewhat different than other stops on the tour and will require minor adjustments. However, Johnson feels that the team he has behind him, led by recently appointed crew chief John Collins, has everything they need to achieve their common goal of powering to the winner's circle on Sunday.

"Luckily, the Make-A-Wish team was able to test in Las Vegas earlier this year, and I'm sure the guys will be looking at those notes," said Johnson, currently 6th in NHRA's Funny Car standings. "The car ran extremely well there, so we should have a baseline for that track. I'm excited."

This weekend will certainly not be the Ottumwa, Iowa-native's first trip to the racetrack nestled on the outskirts of Las Vegas. Johnson has been an NHRA competitor for all of his adult life and made his first professional start in 1989. He has raced in both nitro Funny Cars and Top Fuel dragsters and is also an accomplished sportsman racer who jumped right into national-level competition at the age of 15.

In 2001, Johnson – then driving a Funny Car for legendary drag racer and team owner Don "the Snake" Prudhomme – saw his first win light in Las Vegas. 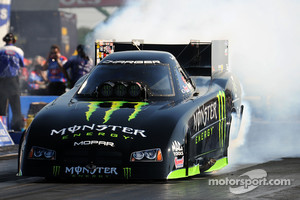 "I remember we ran Whit Bazemore in the final and got the win, and that is something I always think about when I go back there," said Johnson, who has earned nine trophies in NHRA's monstrously competitive nitro ranks. "It was just a good weekend. It was my birthday that weekend, and Don Prudhomme and I share a birthday, so it was his, too. It was really special to get the first win of the year for that team and the first win after they had expanded to a two-car team. It would be nice to see a repeat of that success this weekend."

In addition to the spring win at the Las Vegas facility in 2001, Johnson, who will celebrate a birthday April 6th, also reached the Las Vegas final in 2002 and 2006.

"I'd be lying if I said I wasn't looking forward to this race," said Johnson. "You always have certain tracks where you have success for some reason, and Vegas is one of those tracks for me. It just seems to happen for me there. I would love nothing more than to return to The Strip at Las Vegas Motor Speedway and get that first win for Make-A-Wish and our sponsor, Terry Chandler. Things have been good so far for the Make-A-Wish Funny Car team, but there is nothing like a win."

THURSDAY'S FANFEST ON 'BROOKLYN BRIDGE' The annual spring NHRA FanFest returns to the "Brooklyn Bridge" in front of the New York-New York Hotel & Casino on Thursday on the Las Vegas Strip. The event kicks off the SummitRacing.com NHRA Nationals.

The Don Schumacher Racing New York-New York Dodge Charger R/T Funny Car will be on display at this exciting event.