Homestead is generally one of Tony Stewart's best tracks. After struggling all day long and running one lap down at one point, Stewart and his Joe Gibbs ...

Homestead is generally one of Tony Stewart's best tracks. After struggling all day long and running one lap down at one point, Stewart and his Joe Gibbs #20 racing team fought back, scored an 18th place finish and won the 2002 championship.

Stewart had to avoid trouble on track as the race's laps clicked off. Just past halfway, Stewart was passed by leader Joe Nemechek to be put one lap down. The 20 team struggled with setup throughout the day, but following a caution flag, Stewart was able to jump in front of then leader Dale Jarrett to regain the one lap deficit. 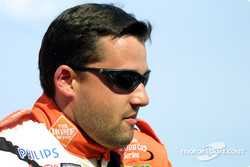 It was far from smooth sailing for the 20 team from that point on. On lap 234 Petty's John Andretti blew an engine in turn 3. Stewart was behind the 43 car as smoke and oil trailed the rear of the Andretti machine.

"This was an ugly day, but we never gave up. We ran hard, got our lap back and got the spots we needed," Stewart said regarding his on-track struggles with the car. Even though he knew he had to pull out a steady run and the car was running less then up to par, the driver of the Home Depot Pontiac was a little confused as to what to do to the car. "I was so nervous I couldn't tell him (crew chief Greg Zipadelli) what to do to fix it," Stewart said.

Apparently, the crew chief Zipadelli was able to figure it out for himself as the team charged back to a top-20 finish. "I don't even know what to say. It's been a long year but this sure makes it worth it."

Roush Racing's Mark Martin entered the event 89 points behind Stewart and tried his best for a final shot at the trophy. He and his #6 team fell short by 38 points after scoring a fourth place run. "I've done all I could and I'm proud at what we've accomplished," Martin said.

Stewart, who holds USAC titles as well as an IRL title, entered the NASCAR division in 1998. He warmed up to stock cars that year in the Busch Series before jumping into Winston Cup and winning rookie of the year in 1999. With the 20 team's championship intact, Joe Gibbs Racing now has two titles under their belt, the first came from teammate Bobby Labonte in 2000.

This season, Stewart and his JGR 20 team have jumped from worst to first. In the season opening Daytona 500, his Pontiac dropped out of the event on the second lap after blowing an engine. He ended that race 43rd. Since then, the 20 crew compiled 16 top-10s and three wins.