Tony Stewart: blueprint for a jumpstart

KANNAPOLIS, N.C., (April 24, 2013) – Give Tony Stewart a pen and a sketchpad and assign him the task of designing the perfect asphalt track for the NASCAR Sprint Cup Series and the blueprint would look a little something like this:

Sound familiar? It should. Those are the specifications for Richmond (Va.) International Raceway, and come Saturday night, it is home to Round No. 9 on the marathon-like Sprint Cup schedule. 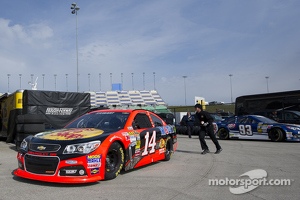 Stewart knows those specifications well, as he’s called Richmond his favorite track. With a total of six wins – three in Sprint Cup, two in the NASCAR Camping World Truck Series and one in a Late Model stock car – Richmond beckons Stewart at a time when he could use a boost.

Mired an uncharacteristic 21st in points, Stewart wants – needs – to tap into the 11 top-fives and 19 top-10s he’s recorded in 28 career Sprint Cup starts at Richmond, where his 950 laps led ranks Stewart third among active drivers, behind only Jeff Gordon (1,415) and Denny Hamlin (1,390).

Stewart’s fondness for Richmond is obvious. It’s the site of his first career Sprint Cup win. Sept. 11, 1999 was a dominating performance, as Stewart qualified second and led a whopping 333 of the 400 laps. He became the first rookie to win a Sprint Cup race since the late Davey Allison on May 3, 1987 at Talladega (Ala.) Superspeedway.

That win jumpstarted Stewart’s ascension to NASCAR superstardom. Seven races later, he scored back-to-back victories at Phoenix International Raceway and Homestead-Miami Speedway. Wins have seemingly bred wins for Stewart, for 18 of his 47 career Sprint Cup victories have come back-to-back. And with at least one win in each of his 14 years in Sprint Cup, Stewart holds the longest winning streak among active Sprint Cup drivers.

With 28 races still remaining this season, and 18 before the 12-driver Chase for the NASCAR Sprint Cup begins Sept. 15 at Chicagoland Speedway in Joliet, Ill., Stewart has ample opportunity to keep his streak going. That it could come at Richmond is certainly possible, despite Stewart’s season to date.

In his last four Sprint Cup races at Richmond, Stewart has finished among the top-10. And in his two visits to Richmond last year, Stewart finished third and fourth, respectively, in the series’ spring and fall stops at the .75-mile oval. In addition to that history, Stewart will bring a new racecar – one that could be emblematic of the clean slate Richmond offers.

The beauty of the Sprint Cup schedule, which stretches from mid-February to late-November to form the longest calendar in all of sports, is that there is a bevy of opportunity. For Stewart, his team and that new No. 14 Rush Truck Centers/Mobil 1 Chevrolet SS, Richmond provides their next-best opportunity to right their ship and set sail for their annual autumn destination – the Chase for the NASCAR Sprint Cup.

You’ve had a lot of success at Richmond and we’ve heard you say it’s one of your favorite tracks. What is it about Richmond that fuels your affinity for the track?


“It’s not one of my favorite tracks, it is my favorite track. It’s the perfect-sized track for a Cup race. The other short tracks we run – Bristol and Martinsville – they’re cool in their own right, but there’s a lot of congestion at those two tracks. But at Richmond, it just seems like that extra quarter-mile, and that three-quarter-mile shape, and how wide the groove gets there, allows for good racing. It seems like we have to race ourselves and race the racetrack versus racing each other a lot of times. You do have to race each other, obviously, but there are a lot of times during the race when you have the flexibility to move around on the racetrack and try to find a spot your car likes better than somewhere else. A lot of times on a short track you don’t have the flexibility. You’re more narrowed down with what groove you’re going to be in. It is literally the favorite track of mine on the circuit.”

What does it take to be successful at Richmond?


“As much as you’re racing everybody else, you have to race the racetrack. It just seems like a place where if you can get the balance right it makes it an extremely fun day. With the two ends of the track being different like they are, it seems like you’re always fighting something, but that’s what always makes the racing good, too. You never really get anybody who gets their car perfect. Even the guy that gets the lead still isn’t happy with his car. So, it’s really trying to find that balance and trying to figure out how to balance both ends of the track together.”

You’ve had a rough start to the season. Where is Stewart-Haas Racing right now?


“Definitely not happy with where we are, but I don’t think anybody really is. I think everybody feels like there are things they can do better, and some of those organizations are questioning what they have to do to get better. We’re one of those teams right now.”

How do you deal with the tough times as an owner?


“It’s not easy, for sure. I mean, it was always hard as a driver, but it’s even worse as a driver/owner. When things are tough, the pressure and the burden is more on you knowing that you’re responsible for everything versus just being the guy driving the car. It’s hard, but it’s also what makes it more gratifying when things go right.”

With the level of competition so high, how hard is it to find an advantage and get your program where you want it to be?


“It just shows how sensitive these cars are. The window of getting them right is very, very small. That’s what makes when you have a good day and you do get it in that window so gratifying – knowing you were able to accomplish that goal. It’s the hard part of trying to figure out what you’re missing when you’re off. That’s the frustrating part – when you go week in and week out and you can’t figure out what that missing piece of the equation is. You see guys that have not been good in the past but all of the sudden are good. They’ve found something, so it’s proof that it’s there. It’s just our job to go out and find it and capitalize on it.”

Wise looking for best finish of '13 at Richmond

Ambrose looks for finish he deserves at Richmond