A strong second-place finish July 17 at New Hampshire Motor Speedway in Loudon. A tenacious sixth-place effort last Sunday in the Brickyard 400 at Indianapolis Motor Speedway. All while a record heat waves grips the nation. And now, the NASCAR Sprint Cup Series visits Pocono (Pa.) Raceway, another fast racetrack with flat corners akin to those found at New Hampshire and Indianapolis.

This time of year, it seems like we get hot.

The driver of the No. 14 Office Depot/Mobil1 Chevrolet Impala for Stewart-Haas Racing (SHR) has recently turned up the wick as hot temperatures continue to bake much of the United States. Stewart appears to be adding to this heat wave, for the two-time Sprint Cup champion is intent on making the 12-driver Chase for the Championship for a seventh time since the its inception in 2004.

Stewart reasserted himself among the top-10 in points with a gritty drive at Indianapolis that saw him come from deep within the field, twice, to score a solid sixth-place finish – his eighth of the season and ninth in 13 career starts at Indy. Coupled with a runner-up finish to SHR teammate Ryan Newman the race before at New Hampshire, Stewart has clawed his way back into the top-10 for the first time since he last raced at Pocono in June.

A driver who typically heats up with the weather, Stewart’s resurgence has also come at relatively flat racetracks, as New Hampshire contains only seven degrees of banking in its corners while Indianapolis supplies just nine degrees. The hot weather has made the tracks greasy and slick, and with little banking to keep a 3,400-pound stock car planted to the pavement, Stewart has tapped his dirt-tracking racing pedigree to slide his way back into championship contention.

That Pocono is next up on the Sprint Cup docket means that Stewart’s flat-track attack is poised to continue.

That Pocono is modeled after three tracks that were built in 1946 (Trenton), 1909 (Indianapolis) and 1903 (Milwaukee) is appropriate considering not much has changed to Pocono’s quirky confines since it opened for business in 1971.

Pocono is the same as it was when the late, great Mark Donohue won the first 500-mile race at the track 40 years ago in a Penske Racing-prepared McLaren/Offenhauser. Donohue wasn’t driving in NASCAR competition during the July 3, 1971 Schaefer 500, but rather in the USAC Champ Car Series – a forerunner to what is now known as the IZOD IndyCar Series.

While Pocono’s garage area has been upgraded since the 70s and other minor adjustments have been made to the facility’s infrastructure, the challenges for man and machine remain no different than they were for Donohue, Joe Leonard, Gary Bettenhausen, Sammy Sessions and Jimmy Caruthers, all of whom were among that 33-driver field four decades ago.

What those men dealt with and what the drivers of today deal with is a racetrack designed by committee – part drag strip, part high-banked oval, part flat track – where if you’re good in one section of the racetrack, you’re typically struggling in another.

Sprint Cup drivers began their pilgrimage to Pocono in 1974 and started coming twice a year in 1982. And with each trip, crew chiefs and drivers have attempted to build and set up a car capable of negotiating each of the three different turns as smoothly and as quickly as possible – a challenge unlike anywhere else on the 36-race Sprint Cup schedule. 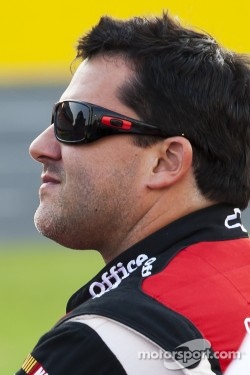 Twice in 25 career Sprint Cup starts at Pocono Stewart has found the proper combination to claim victory. He led 37 laps in June 2003 to score his first win at the 2.5-mile triangle while driving for Joe Gibbs Racing. And in June 2009, he claimed the first ever point-paying victory for SHR when he started on the pole and led 39 laps en route to winning the Pocono 500.

Stewart and crew chief Darian Grubb would love nothing more than to score a victory at Pocono to solidify their top-10 point standing, while also nabbing the kind of cushion a win would provide in becoming Chase eligible.

Only the top-10 drivers are locked into the Chase after round No. 26 at Richmond (Va.) International Raceway – a cutoff that comes in just six races. The remaining 11th and 12th spots go to the drivers between 11th and 20th in points who have the most victories, and if tied among wins, whichever driver is higher in points gets the nod to join the elite group of 12.

Six times Stewart has been a part of the Chase, and when he won his second Sprint Cup championship in 2005, he became the only driver to win a title under the old, season-long format (2002) and the current Chase design. He’s also the last driver not named Jimmie Johnson to win a Sprint Cup title.

Add that history, along with Stewart’s recent history at the flat tracks of New Hampshire and Indianapolis, and the Office Depot/Mobil 1 driver is ready to add to his own history by scoring his 40th career Sprint Cup victory and his third at Pocono, all while extending his 12-year streak of winning at least one race each season.

TONY STEWART, Driver of the No. 14 Office Depot/Mobil 1 Chevrolet Impala for Stewart-Haas Racing:

It’s hot and you’ve put together two very strong top-10 finishes in a row. This has become typical for you. Why?

“This time of year, it seems like we get hot. It just seems like when the tracks get hot and slippery that it suits my driving style and the setups Darian (Grubb, crew chief) puts on the car.”

Explain a lap around Pocono.

“Turn one is probably the easiest of the three – you drive it in kind of deep and then try to float the car through the corner. You go down the backstretch and into the tunnel turn and it’s basically one lane. It’s flat and very line-sensitive. You’ve got to make sure you’re right on your marks every lap when you go through there. Then you’ve got a short chute into turn three. It’s a big, long corner and it, too, is very line-sensitive. Add the fact that we’ve got a straightaway that’s three-quarters of a mile long after that, and it’s very important that you get through the last corner well. You need to come off the corner quickly so that you’re not bogged down when you start down that long straightaway. Each corner has its challenges, and each one tends to present a different set of circumstances with each lap you make.” 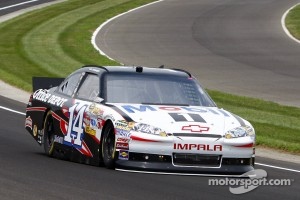 From a driver’s standpoint, what’s your biggest challenge at Pocono?

“All three corners are different – that’s the most challenging part. It seems like you can always get your car good in two of the three corners, but the guys who are contending for the win are the guys who can get their car good for all three corners, which is very hard to do. It seems like if we can get our car to go through the tunnel turn well, then we’re normally able to get it to go through the rest of the racetrack well. The tunnel turn seems to be our toughest turn on the racetrack. Getting through turn two and the last corner of the racetrack that’s flat, long and sweeping – those seem to be the toughest two corners to get through. And if you’re a little bit off, you’re a bunch off. If there’s a guy who can get all three of those corners right, then that’s the guy who’s going to win the race.”

Winning by maximizing fuel mileage has been a theme this year. Your win at Pocono two years ago came in a fuel-mileage race. Can you explain what you did to make sure you had enough fuel to go the distance while many of your competitors did not?

“I’ve lost a lot more races like that than I’ve won. It was between Carl (Edwards) and I. We were the strongest two cars at the end of the race and we were able to get the track position we needed. Our guys did a great job of getting us out of the pits in the lead and that gave us the opportunity to make Carl push harder in the beginning to get the lead. Once he went into that fuel conservation mode, we had to follow suit. To be in a situation where your speed is dictated off the guy behind you and not off of what you can do, it’s a different style of racing. It’s hard. It’s just as hard, if not tougher, than trying to run 100 percent.”

Inside the mind of a thrill seeker