KANNAPOLIS, N.C., (May 15, 2013) – The NBA has Kobe Bryant, Kevin Garnett and Shaquille O’Neal on its list with 15 All-Star appearances. Baseball greats such as Brooks Robinson, Ozzie Smith and Yogi Berra each played in 15 All-Star Games. And proving how elusive 15 is, no NFL player has played in 15 Pro Bowls. The only one to come close is Merlin Olsen with 14. 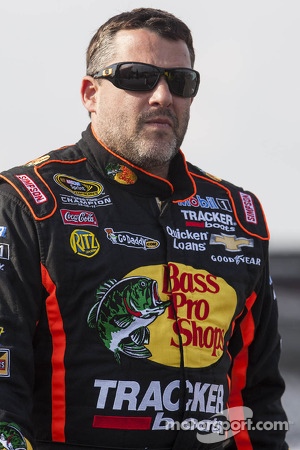 By definition, an All-Star event is an exhibition featuring the sport’s best competitors. In basketball, baseball and football, participants are selected by a combination of votes from fellow players, coaches and fans.

It’s a model that has worked very well for Stewart, who has been an All-Star Race regular since his rookie year in 1999.

A win in what was then known as The Winston Open – the undercard race to The Winston, which was the original name of the All-Star Race – propelled Stewart into The Winston. He started last in the 21-car field, but rallied his way into the lead before Ironman Terry Labonte took control and drove to the win with Stewart crossing the stripe in second.

Stewart has since solidified his place in the annual event by winning each of the necessary qualifications for the All-Star Race. He’s a three-time Sprint Cup champion who has won at least one race every year he’s competed in the series. And in 2009, Stewart etched his name on the list of All-Star Race winners by besting the best of the best. He led only once for two laps, but they were the most important ones, pacing the final two circuits of Charlotte’s 1.5-mile oval after getting by Matt Kenseth for the lead on lap 98 of the 100-lap contest. Stewart’s margin of victory over the 2003 Sprint Cup champion was .971 of a second.

It was Stewart’s first victory as a driver/owner with Stewart-Haas Racing, making him the first driver/owner to win a Sprint Cup-sanctioned event since Ricky Rudd won a point-paying race in October 1998 at Martinsville (Va.) Speedway. Stewart became the second driver/owner to win the All-Star Race, joining Geoff Bodine, who accomplished the feat in 1994.

Along with the 2009 win, Stewart has scored an impressive eight top-fives and earned an average finish of eighth in 14 career All-Star Race starts.

Now, All-Star Race No. 15 looms for Stewart under the lights at Charlotte Motor Speedway. And like Stewart’s All-Star counterparts in the stick-and-ball realm, it’s another chance to shine.

The Winston Open was your first trip, unofficially, to victory lane in NASCAR’s elite series. What was that like?

“It was awesome. To do what we did, even though it wasn’t with a full field…I mean, just to win a race. Winning is winning to me. I was real appreciative of it and just excited that we got to victory lane once.”

What kind of gameplan did you establish for yourself once you made it into The Winston?

“We had no gameplan. We went wide-open. We didn’t have anything to lose. We started on the tail of the field, Greg (Zipadelli, crew chief) and I basically looked at each other and said that we were gonna go out there and have fun. It was just like a Saturday night short-track race. We were gonna race and have a good time doing it. That’s what we did.”

Are you familiar with the format of this year’s All-Star Race?

“It doesn’t matter to me what they do with the format. Whatever it is, the goal is still to win it and you could swear that we’re short-track racing on a big mile-and-a-half track. So, whether it’s 10 laps, 40 laps, two-tire pit stop, four-tire pit stop – it doesn’t matter to us. The important thing is that it puts on a good show for our fans. At the same time, you’ll figure it out. Whatever the format is, these teams figure out what’s the best way to accomplish that goal.”

Because the All-Star Race is a non-points event, does it take on the same kind of importance as a regular, point-paying race?

“It’s an event for the fans and that’s something that’s very important to us, but there’s a lot of bragging rights, too. Charlotte is an area where 95 percent of the Cup teams are based, so when you go there, you want to run well. You’re able to have guys come from the shop that don’t get a chance to travel. They don’t get a chance to come to the racetrack very often and see the fruits of their labor, so for them to come to the All-Star Race and see their cars run, especially when you have a good night, it really pumps up your organization. You do it for your fans, but at the same time, you do it for your organization and your team. That’s why the All-Star Race is important.”

The 2009 season was your 11th in Sprint Cup, but your first as a driver/owner. How much of your win in the All-Star race was a sense of relief and how much of it was a sense of exhilaration?

“Well, we’d been running well before the All-Star Race, but I don’t think any of us had an expectation of when we thought we’d win a race. I felt in my heart that the team was capable of winning a race in the first year at some point, but I never would’ve dreamed it was going to be one of the biggest races of the year, especially in our backyard. I think that’s really what made it so big – that it happened much sooner than a lot of people anticipated. There were a lot of people that didn’t know what to think about what we were trying to do. I think it really sent a message about how dedicated our organization is to being successful. It kind of quieted a lot of the naysayers and a lot of people that were on the fence trying to decide if I’d made a good decision or not (to become a team owner). I think standing there on the stage and getting the check was a pretty good statement.”

What stood out the most about your win in the All-Star Race?

What’s the best thing about winning the All-Star Race?

“Well, the greatest thing about it is, if you win the thing from a car owner’s standpoint, which I know very well, now, it’s a great way to pay bills. It helps that out quite a bit. This weekend’s a fun event. It’s not a typical Cup race, by any means. The format is strictly set up for an exciting finish for the fans. It’s cool. It’s a big deal when we come to Charlotte and it’s not because of anything more than the fact that the guys who work at the shop everyday and don’t get a chance to go to the racetrack, they get a chance to go to Charlotte. They get to come see their racecars that they work on during the week. Instead of just watching them on TV, they get to be there, they get to see what the road crews are doing, and they get to be there first-hand. And that’s a big sense of pride if you have a good night. And to be able to celebrate with guys who never get to go to the track, if you can win a race at Charlotte, it’s big. This weekend, we’re racing for $2 million. That’s definitely nothing to pass off lightly.”

Can the All-Star Race be used as a test session for the Coca-Cola 600?

Dick Trickle ended his own life at the age of 71