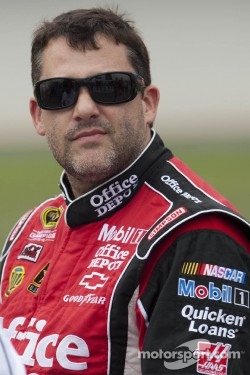 KANNAPOLIS, N.C., (Sept. 5, 2012) – As a native Midwesterner more comfortable in jeans and a T-shirt, there is little Tony Stewart has in common with Wall Street shark Gordon Gekko, the fictional character made famous by actor Michael Douglas in the 1987 film Wall Street.

However, there is one aspect of Gekko’s persona that resonates with Stewart, driver of the No. 14 Office Depot/Mobil 1 Chevrolet for Stewart-Haas Racing, coming into the Federated Auto Parts 400 NASCAR Sprint Cup Series race Saturday night at Richmond (Va.) International Raceway.

Gekko believed that greed was good, that it “clarifies, cuts through, and captures the essence of the evolutionary spirit” and that it “marked the upward surge of mankind.”

With three Sprint Cup wins already this season, Stewart will make the Chase for the NASCAR Sprint Cup for the eighth time in his career no matter how he finishes at Richmond. But, a victory Saturday night would give him four wins, placing him in a tie with Denny Hamlin for the No. 1 seed when the 12-driver, 10-race Chase starts Sept. 16 at Chicagoland Speedway in Joliet, Ill.

Greed is indeed good for Stewart. A win would stymie a seven-race slide that has seen Stewart drop from fifth in points to 10th, with only an 18-point buffer separating him from 11th-place Kasey Kahne.

With all the talk of Stewart’s slide and the breathlessness over how so many drivers have to win in order to make the Chase, Stewart can silence everyone by stomping to his fourth Sprint Cup win at Richmond and the 48th of his career. The three-time and reigning Sprint Cup champion would be back, because as Stewart showed last year when he went winless during the first 26 races but then won the Chase opener at Chicagoland to begin a five-win charge toward the title, a late-season victory could again be the spark that sets Stewart on another epic run.

Are there other drivers who could really use a win at Richmond? You bet. But Stewart is taking a page from Gekko.

Dressed impeccably in an Armani suit, Gekko delivered his “greed is good” line to a room full of shareholders. With an Office Depot/Mobil 1 firesuit serving as his Armani, Stewart will take to Richmond’s .75-mile oval in a similar mindset. The 14-year Sprint Cup veteran could very well deliver to a crowd of nearly 90,000 at Richmond, as Stewart has proven to be a common denominator when it comes to winning in the Commonwealth.

In addition to his wins in September 1999, May 2001 and May 2002, Stewart has 10 top-fives and 18 top-10s to give him an average finish of 10.6 in 27 career Sprint Cup starts. He has also led a total of 935 laps with a lap completion rate of 98.3 percent. And outside of Sprint Cup, Stewart has two NASCAR Camping World Truck Series wins at Richmond, along with a win in his most recent visit there in April, as Stewart won the Denny Hamlin Short Track Showdown – a 75-lap charity Late Model stock-car race.

Those numbers are all very good and well-earned, and Stewart plans to add to them on Saturday night, because in this case, greed is good.

TONY STEWART, Driver of the No. 14 Office Depot/Mobil 1 Chevrolet for Stewart-Haas Racing:

You’ve had an up-and-down season. Where is Stewart-Haas Racing right now? “Definitely not happy with where we are, but I don’t think anybody really is. I think everybody feels like there are things they can do better, and some of those organizations are questioning what they have to do to get better. We’re one of those teams right now.”

While there might be a feeling of déjà vu when you look at where you were last year at this time, do you feel that with three wins you’re in a better position for this year’s Chase? “I think we proved last year that everything you do those first 26 weeks really doesn’t count. It’s just what happens those last 10 weeks. It was like being in an episode of ‘The Twilight Zone.’ It was so frustrating. It was like we literally couldn’t do anything right. Then we go to Chicago and win there. We went to Loudon, win there. The Martinsville race was probably one of my best drives ever in my career, as well as Texas and Homestead. It was like there were two totally different seasons. It didn’t even have the same flow to it. I think you can have guys that run really well right now that can fall on their face in the Chase. We proved last year we could be on our face for 26 weeks and look like a show dog at the end of the deal.”

Have you thought back to other races where you could’ve scored more points than you did? “I just try to keep it real simple. I really don’t try to over-think it. I don’t try to over- calculate everything. I’m focused on Saturday night, then once Saturday is over with, I’ll worry about what we’re going to do for Chicago next week. I literally take it by a seven-day cycle at a time. Atlanta was last week, so it really doesn’t matter what we did there. We are at a totally different racetrack this week. So no matter what happened last week or two weeks ago or two months ago, we can’t change any of it. We’re better off taking all of our energy and focusing on this coming week instead of focusing on something we can’t change.”

As a driver/owner, how much does making the Chase weigh on your mind? “I still want the chance to race for a championship, so I don’t think about it any differently as an owner. Obviously, you want your partners and owners and sponsors to be a part of the Chase and get the exposure that the Chase brings. There are a lot of teams and a lot of drivers and a lot of owners right now who are trying for that same thing. It does weigh on your mind, and you can make yourself sick thinking about it, but you just have to go out and do the things you do every week. You try and win the race, and that’s what we’ve always done, is try and win the race each week. And if you can’t win, get second, and get as many points as you can.”

How do you deal with the tough times as an owner? “It’s not easy, for sure. I mean, it was always hard as a driver, but it’s even worse as a driver/owner. When things are tough, the pressure and the burden is more on you knowing that you’re responsible for everything versus just being the guy driving the car. It’s hard, but it’s also what makes it more gratifying when things go right.”

With the level of competition so high, how hard is it to find an advantage and get your program where you want it to be? “It just shows how sensitive these cars are. The window of getting them right is very, very small versus what we’ve had in the past. That’s what makes when you have a good day and you do get it in that window so gratifying – knowing you were able to accomplish that goal. It’s the hard part of trying to figure out what you’re missing when you’re off. That’s the frustrating part – when you go week in and week out and you can’t figure out what that missing piece of the equation is. You see guys that have not been good in the past but all of the sudden are good. They’ve found something, so it’s proof that it’s there. It’s just our job to go out and find it and capitalize on it.”

With three Cup wins, two Truck Series wins and a Late Model win, you’ve had a lot of success at Richmond. Is it one of your favorite tracks? “It is my favorite track. It’s not one of them, it’s the favorite track of mine on the circuit. It’s the perfect-sized track for a Cup race. The other short tracks we run – Bristol and Martinsville – they’re cool in their own right, but there’s a lot of congestion at those two tracks. But at Richmond, it just seems like that extra quarter-mile, and that three-quarter-mile shape, and how wide the groove gets there, allows for good racing. It seems like we have to race ourselves and race the racetrack versus racing each other a lot of times. You do have to race each other, obviously, but there are a lot of times during the race when you have the flexibility to move around on the racetrack and try to find a spot your car likes better than somewhere else. A lot of times on a short track you don’t have the flexibility. You’re more narrowed down with what groove you’re going to be in.”

What does it take to be successful at Richmond? “As much as you’re racing everybody else, you have to race the racetrack. It just seems like a place where if you can get the balance right it makes it an extremely fun day. With the two ends of the track being different like they are, it seems like you’re always fighting something, but that’s what always makes the racing good, too. You never really get anybody who gets their car perfect. Even the guy that gets the lead still isn’t happy with his car. So, it’s really trying to find that balance and trying to figure out how to balance both ends of the track together.”

Clint Bowyer and the no. 15 team head to Richmond locked in

Edwards on Richmond: Only thing I can control is going out to win the race