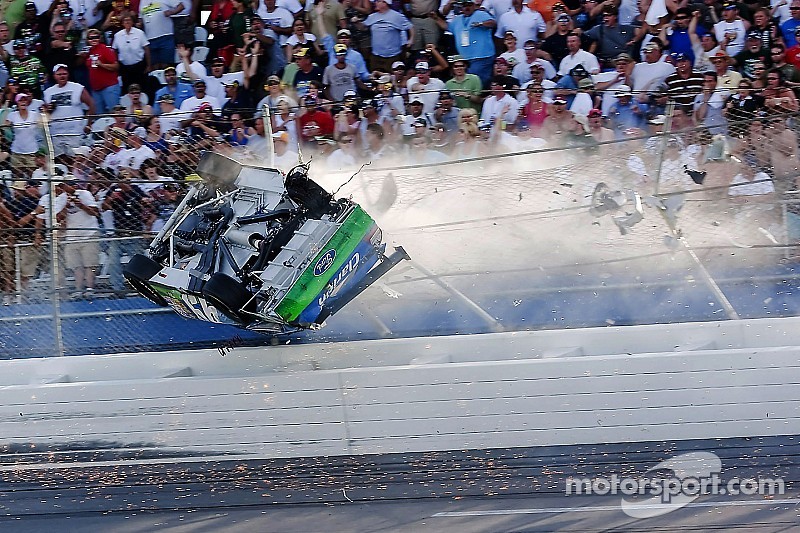 If you're into Talladega famous "big one" crashes, this top 10 list is for you.

With the Spring race at Talladega right around the corner, fans cannot deny getting ‘Dega fever. Tight racing, spectacular wrecks and incredible finishes are the norm at Talladega.

Here are Motorsport.com’s top-10 list of the wildest and craziest wrecks from the past NASCAR sanctioned races at the restrictor plate superspeedway.

10. Mark Martin goes through fences and guardrails with no brakes in 1994

A huge wreck in 1994 on lap 104 sends Mark Martin flying into the infield with no brakes. Mark was shaken up but not seriously injured.

Brad Keselowski pushed past leader Kevin Harvick, who was seeking to complete what would have been a remarkable daily double, to win Sundays Aarons 312 Nationwide Series race at Talladega Superspeedway. The end result: a huge wreck and Dennis Setzer going up in flame in the final lap.

Legendary Dale Earnhardt had his share of bad fortune at Talladega, also. In 1996, the Intimidator hits the wall at 190mph and walk to the ambulance on his own power.

7. Last lap from Hell for Tony Stewart at the 2012 fall race

Tony Stewart was leading the Fall race at Talladega in October when he was turned by Michael Waltrip who found a massive push from Casey Mears. The whole packed, who were running 4-wide 4 deep piled into the wreck. Oh, did we mention this was all on the final lap. Matt Kenseth, and two other lucky cars made it through, thus Kenseth won the race.

Elliott Sadler stuns the racing world with this spectacular, and incredibly high flying wreck on the backstretch of the 2003 Fall race. With a three-by-three-by-three pack heading to the final laps, and a weaving Michael Waltrip, Sadler made contact with Kurt Busch and found himself tumbling down the track and finally into the grass at the bottom of turn three. He would be ok after the incident.

Rusty Wallace was lucky to escape serious injury when the Intimidator decided to put the bumper to Wallace heading toward the checkers. This was not necessary, and sent Wallace spinning, and flying into the air. He came down on the grass and barrel rolled with parts ripping off the car left and right.

4. Jimmy Horton flies over the wall

Jimmy Horton left the track in 1993, an not in a conventional manner. After another driver suffered a tire failure going into turn one, he was impacted in the right side sending him rolling up the track and over the wall, coming to rest on the other side of the banking. Horton hopped out of the car uninjured. That crash gave us one of the best racing quote ever, by Jimmy Horton: "You know you're in trouble when the first person to get to you after a wreck is carrying a beer."

3. 2009: Carl Edwards does a "Bobby Alison" and crosses the finish line Ricky Bobby-style

Carl Edwards will need forget his ride into the fencing. Heading to the checkered flag, cousin Carl found himself washing up the track, allowing his tandem pusher, Brad Keselowski on his inside. Edwards cut down sending him spinning and then into the air. Ryan Newman would come along and hit the tumbling Edwards, launching him towards the front stretch grandstand. The catch fence would keep Carl on track, but a number of fans were injured in the accident.

Ricky Craven takes a scary ride in this wreck in turn one at Talladega during the Spring event of 1996. His car was launched into the catch fencing as the pack passed him below. Mind boggling wreck. Craven would recover from minor injuries sustained from the incident.

1. 1987: the crash so bad that it caused the restrictor plates to be used thereafter

This one cannot be left out. Bobby Alison suffered a tire failure heading through the tri oval at well over 200 miles per hour, sending his car flying into the catch fencing along the front stretch. Fans were injured from the accident, and due to the speeds and chances of the cars becoming airborne, NASCAR slowed them down the following year using restrictor plates.

So, while they are exciting and spectacular, safety has come a long way and helps ensure that our racing heroes can make mistakes on track, and still race another day.