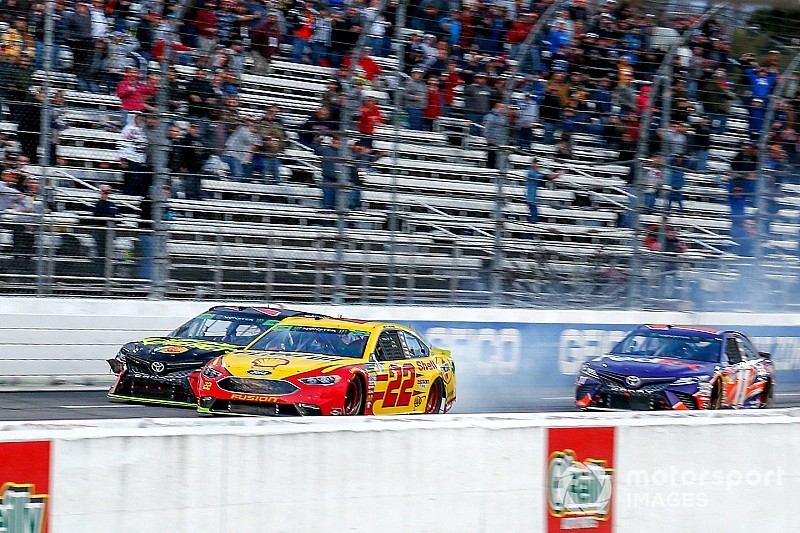 Motorsport.com continues its annual countdown of the biggest stories in racing this year with the feud between NASCAR's newly crowned champion and its newly dethroned one -- Joey Logano and Martin Truex Jr.

With NASCAR's 'win and you're in' system, the third round of the playoffs is where sparks often fly. A victory in any of those three races leading up to season finale secures one's shot at the championship.

We saw Matt Kenseth and Joey Logano collide in the third round in 2015, Jeff Gordon and Brad Keselowski brawl in 2014 and Denny Hamlin versus Chase Elliott in 2017.

Well emotions overflowed once again at NASCAR's shortest circuit at Martinsville Speedway in Virginia. Defending champion Martin Truex Jr. was running down Joey Logano for the race lead and after working on the No. 22 Team Penske Ford for several laps, he cleanly made the pass entering Turns 1 and 2 on the final lap. Logano responded by knocking Truex up the track in the final corner and the duo collided in spectacular fashion as they raced towards the finish line.

Logano was victorious and Truex was left furious. "He won the battle but he ain't winning the damn war," the latter declared. "I'm just not going to let him win it, I'm gonna win it."

Truex felt he was done dirty and that Logano's move was a cheap shot. "I was next to him for six laps, I never knocked him out of the way. We're were going to race hard for it in my book. And I cleared him fair and square. We weren't even banging doors for me to pass him. He just knocked me out of the way so yeah, it short track racing, but what comes around goes around."

Logano defended the pass, saying, "We're here to win a championship this year." His team owner Roger Penske backed him as well, even criticizing Truex for his reaction to the situation.

Despite missing out on the win, Truex still managed to join Logano in the final four with finishes of the ninth and 14th in the next two races. And it's worth noting that with a DNF for Logano in the penultimate race of the season, it became apparent that without the Martinsville win, he would have been otherwise eliminated from the playoffs.

Well, he certainly made the most of this opportunity as he and none other than Truex found themselves battling for the crown in the closing laps at Homestead-Miami Speedway. A late caution set up a 16-lap sprint to the finish with Kyle Busch out front.

Busch quickly faded on the restart as Truex surged by, attempting to win back-to-back championships before Furniture Row Racing closed their doors. However, Logano was in hot pursuit and on Lap 256/267, he made a pass on the outside stick and took control of the race.

And he never looked back, claiming his first ever NASCAR Cup Series championship and delivering Roger Penske his second. It was a bit of an upset as he bested the 'Big 3' (Truex, Busch and Kevin Harvick), who had dominated the majority of the 2018 season while Logano only emerged as a contender in the final leg of the season.

He ended the year with three wins, one pole, 13 top-fives, 26 top-tens, and of course a championship trophy. His title run proved just how critical it is to go for wins in NASCAR's knockout format and although it was Truex's principles that cost him the 'battle' at Martinsville, he failed to win the 'war' as well. Ultimately, it was the driver who was willing to do whatever it took not to lose.