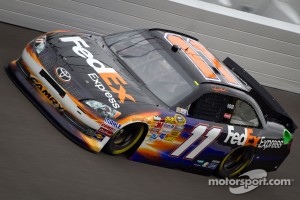 TRIO OF TOP-10S AT DAYTONA: Toyota driver Denny Hamlin earned a fourth-place finish in Monday night's rain- delayed NASCAR Sprint Cup Series (NSCS) Daytona 500, leading a race-high 57 (of 202) laps. It was the driver of the Joe Gibbs Racing No. 11 Camry's career best Daytona 500 result at the 'World Center of Racing.' Joey Logano (ninth) and Mark Martin (10th) also finished in the top-10 in the 500-mile season opener. Camry driv er Kyle Busch was victorious in the Bud Shootout -- his first triumph in the exhibition race.

FAMILIAR WITH PHOENIX: Camry drivers Busch, Hamlin and Martin have had success at Phoenix International Raceway in the NSCS. Martin has the most NSCS career starts at Phoenix -- 30 dating back to 1988. His Phoenix results include two wins (1993 and 2009), 12 top-five results, 19 top-10 finishes and one pole position. In 13 starts, Hamlin has one pole at Phoenix (2005) and six top-10 finishes, including four while driving a Camry at the one-mile race track. In 14 starts, Busch has one win (2005) and eight top-10 results, including a runner-up result last February. The three drivers have combined to lead a total of 1,345 laps at Phoenix -- 833 by Martin, 292 by Hamlin and 220 by Busch.

DESERT DANCE: Last November, Kasey Kahne drove a Camry to its first NSCS triumph at Phoenix International Raceway. He led 14 laps to give the Red Bull Racing Team the victory in the season's penultimate event. After last year's Phoenix win, Camry drivers have now been victorious at 20 of 23 NSCS race tracks on the current schedule -- and are still looking to register wins at California's Auto Club Speedway, Indianapolis Motor Speedway and Kansas Speedway.

SUN DEVIL STORY: Former Arizona State University football player Wes Evans brings his athletic ability, dedication and teamwork to his role as the gas man on the pit crew of Michael Waltrip Racing's (MWR) No. 56 NAPA Toyota Camry driven by Martin Truex Jr. The 25-year-old Evans played defense end and tight end during his collegiate career with the Sun Devils (2005-2008). The Reno, Nev., native graduated with a degree in marketing communications, and is in his first season with MWR after previously working with Red Bull Racing Team since 2009.

NASCAR Sprint Cup Series (NSCS): In the NASCAR Sprint Cup Series (NSCS) season-opening Daytona 500, Toyota drivers combined for one top-five result, three top-10 finishes and 68 laps led u Joey Logano earned his career-best Daytona 500 finish with a ninth-place on Monday u Camry drivers have earned 13 top-10 NSCS finishes at Phoenix u Toyota driver Denny Hamlin spent the majority of the off-season in the Phoenix-area u Camry driver Martin Truex Jr. has one pole (Nov. 2009) at Phoenix.

What did you like about spending your off-season in Phoenix? "What I liked the most about it in the winter was the weather. It's 75 (degrees) there every day. For me, it was kind of like a vacation spot, but I stayed out there an extended period of time. They have some great golf courses, great shopping and dining. For me, of all the places I would want to go on vacation I would pick there. I just spent my off-season there because of that."

Would you consider Phoenix another 'home' track? "Thinking about it -- now I do have a little bit of a different outlook. I'll have more people and friends that I normally wouldn't have at that race track coming out to visit. There's a lot of baseball players that I met that are in spring training that are going to come down and watch. It will have a little bit of a home track feel."

Will the race this week be similar to the November event? "I think it will be a little bit better than November. I thought that the surface raced better actually than we thought it was going to race right off the bat. During testing, I was very worried about how the race was going to be. I think the time we got on it and the rubber that laid down -- it raced better than expected. It will still be two to three years before we see really good side-by-side racing, but they had to make changes. The track was just coming apart."

How will the spring race at Phoenix compare to the November event? "November was a little bit different than what we all expected. The way the race played out and the way the groove kind of widened out a little bit, it made it a bit racy. We expect some of that here this time, but hopefully the conditions are a little cooler so we can lay more rubber down and we can spread the groove out more and make for a good race. It seemed like you could run guys down, but it was a little hard to pass, where on the old surface you could at least get guys to get a little loose or start losing grip in their tires and start fading. Now you run the same time all the time."

Will the rain delay at Daytona affect your team for Phoenix? "While in Daytona, there were still several employees back at the shop getting the Phoenix car ready. It was fairly close to being done last week (before Daytona). The spare was already done. It's basically waiting for the transporter to get back and make a changeover. There might be a few things that we'll have to do to it. But, I'd say that Todd Berrier (crew chief) probably already has that handled. It's going to make a tough trip for the truck drivers more than anything else, leaving Daytona to go home and make a swap. How many hours will that take? You have to make sure that you've planned well enough that your truck drivers can get there in the amount of time that's out there. It's a long ways."

Do you enjoy Phoenix? "Phoenix is one of my favorite tracks on the circuit because it's as close to a home race as I get coming from Idaho. I always have a lot of family and friends that come into town for that race and I think it's a great race track, too. What I like about Phoenix is that it's good short track racing with a lot of speed and race-ability. Since they repaved the track, you were able to see two-wide racing. The second groove made for even better racing."

Is Phoenix a track where you like racing? "I'm really looking forward to getting back to Phoenix, especially since we did so well there last year. We were strong in the first Phoenix race last season, and we had a really fast car for the fall race, but we unfortunately got taken out on the first lap. This weekend will be a chance at redemption at a place I enjoy and a place where I've always had good speed. I'm ready to put Daytona behind us and give the fans a good show in Phoenix."

Did you ever dream your first series victory would come this quickly and at Daytona? "I came off of dirt Late Models, and went to Late Model stocks after that. We've run a few truck races. This is feature win number three for me in my whole career. I've won one dirt Late Model race and one Late Model race. It's unbelievable. I couldn't imagine being here. We got together with Tom (DeLoach, Red Horse Racing co-owner) in the off-season. I don't really know how it worked out. We just kind of ran into each other. It just evolved from there."

Martin uses music to energize his training for Phoenix