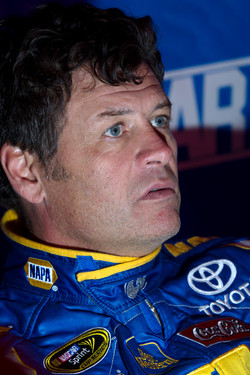 WALTRIP RETURNS: Toyota team owner and driver Michael Waltrip will compete in both the NSCS and NNS races this weekend at Talladega Superspeedway. Waltrip will make his 50th start at the Alabama track in Sunday’s Sprint Cup Series race behind the wheel of an Auburn University-themed No. 15 Aaron’s Camry to honor the 2010 BCS National Championship football team. In 49 career starts at Talladega, Waltrip has recorded a win (Sept. 2003) and a pole position (Oct. 2007), as well as seven top-fives and 14 top-10 finishes.

CLAIM TO HALL OF FAME: Charlie Brock, the car chief on the NNS JGR No. 18 Camry driven by Kyle Busch, spent seven years in Hueytown, Ala., and is the grandson of legendary racer ‘Red’ Farmer -- an original member of ‘The Alabama Gang.’ Farmer raced with new NASCAR Hall of Fame inductee Bobby Allison and his brother Donnie Allison in the 1960s and 1970s on the NASCAR circuit. Farmer continues to race dirt Late Models at short tracks around the southeast, including just across the street from Talladega Superspeedway at the Talladega Short Track.

NASCAR Sprint Cup Series (NSCS): Since the start of the 2011 season, Toyota drivers have combined for one victory, five top-five results, 13 top-10 finishes and have led 690 laps … After seven races, Kyle Busch currently ranks second in the NSCS point standings, trailing Carl Edwards by nine points … Kasey Kahne (16th) and Denny Hamlin (20th) are also in the top-20 in the standings … The Toyota Camry has visited victory lane twice at Talladega Superspeedway with Busch (April 2008) and Tony Stewart (Oct. 2008) … Other Camry drivers who have recorded wins at the 2.66-mile superspeedway include Bobby Labonte (April 1998), Michael Waltrip (Sept. 2003) and Brian Vickers (Oct. 2006) … Joey Logano has recorded three top-10 finishes in four starts at Talladega, including a fifth-place result last fall for the 20-year-old racer.

Do you expect to see drivers communicating with each other during the Talladega race like we saw at Daytona? “I expect you’ll see that some more. I think it’s how racing is going to be right now. The way the cars are and the way the rules are. I think some of it could be better and I think some of it could be worse, but it is what it is. It made it a lot different. I kind of liked it, but then at the same time I’ve always really liked the big packs to where it used to be when we’d be four-wide and 10 rows deep or seven rows deep. It’s a lot different. There’s probably going to be less wrecks the way it is now and not such the massive huge wreck.”

What have you done outside the race track to keep yourself motivated this year? “I’ve worked harder. I’ve never worked as hard as I have the last probably three weeks or so on studying data, studying different video and stuff like that. I feel like hopefully it works out to my benefit and I feel like it has already. It did at Martinsville and different things, like California where I felt like it was a benefit. I feel like I’ve been as competitive in races and qualifying -- it’s just I have to keep working.”

Are you looking forward to driving a Camry that will honor the 2010 BCS National Champions? “Wait ’til you hear me introduced at driver introductions. I bet I get as many boos at Kyle Busch and as many cheers as Dale (Earnhardt) Jr. I don’t care if they boo or cheer. The cool thing is people will notice the Aaron’s car. I mean think about it -- a Kentucky guy driving an Auburn car in front of a lot of Alabama fans in a NASCAR race at Talladega. You can’t write stuff better than that.”

I expect speeds to be higher because we’ll be pushing all the way around.

Will the racing at Talladega compare to the racing at Daytona earlier this year? “It’s going to be a crapshoot. You have no idea what’s going to happen or how it’s going to happen. We just worry about surviving and trying to survive. Right now, with the way that we saw the race play out in Daytona, we’re expecting the same thing -- NASCAR is expecting the same thing and that’s why we had the restrictor plate change already. They’re being a little bit proactive in that, and allowing us to get some testing done -- some dyno testing done with the smaller plate so we can be ready. I expect speeds to be higher because we’ll be pushing all the way around. Other than that, it’s just Talladega.”

Were you proud of how your race team and Kyle Busch handled adversity during the race at Texas? “I’m so proud of this race team. We’re going to have to handle adversity -- that’s something that we probably didn’t do as good as we wanted to last year. It’s actually good to have a few tests early in the year to see how tough you are and nobody hung their head. Kyle (Busch) was in great spirits and he understands what’s going on. I’m really proud of how everybody is coming together and sticking up for one another. That’s something that we probably lacked last year. I think we made a lot of progress.”

NASCAR Nationwide Series (NNS): Since the start of the 2011 season, Toyota drivers have combined for three wins , five top-five results, 15 top-10 finishes and have led 647 laps … Brian Scott (eighth, -45 points) is the top Toyota driver in the NNS point standings after six races … Kenny Wallace (ninth), Steve Wallace (11th), Michael Annett (12th) and Joe Nemechek (14th) are also in the top-15 in the standings … Kyle Busch has led more than half (50.2 percent -- 587 of 1170 laps) of the laps in the NNS this year … Busch is the series all-time laps leader with 10,053 career circuits led.

Do you enjoy racing at Talladega? “Talladega is a track that has been really good to me. Most of my top-five and top-10 finishes have come in the Cup Series there. The deal going to Talladega now is how you approach it. If somebody pushes you too hard, you spin out. I can tell you, I’ve already got my game plan laid out. I’m going to go to Talladega happy, excited to be there, but I will be there on the white flag lap. We’re not going to chance wrecking out like we did at Daytona.”

I know with five laps to go, all hell is going to break loose.

Are you looking forward to Talladega? “I’m looking forward to going back to Talladega and working more and trying to get better at the two-car drafts. I felt like I struggled and was behind. I didn’t get much practice with that at Daytona and it ended up biting us and we didn’t get a good finish. We’ll go there and try to work on that -- master that -- and hopefully get a good finish and move on.”

Were you impressed with Kimi Raikkonen during his testing last week? “Kimi (Raikkonen) is a race car driver, so he does know how to drive race cars and drive them well. I wasn’t there until later on in the afternoon on the first day and I got to see it firsthand. I got in the truck myself and ran some laps to see how I compared to where he was on tires and stuff and we ran identical lap times, so he’s right there -- he knows what he’s doing.”