IN IOWA: Making his 500th-career start, Kenny Wallace (sixth) captured his best finish of the season at the short track in Newton, Iowa. The top-10 finish at Iowa Speedway was the 163rd of Wallace’s 22-year career in the NASCAR Nationwide Series (NNS), and his fourth in his first-season piloting a Camry. Michael McDowell and Drew Herring finished seventh and 12th, respectively, in their first career starts for JGR in the No. 18 and 20 entries. Additional Camry drivers in the top-15 included Steve Wallace (11th) at the track his father, Rusty, designed, and Michael Annett (13th). 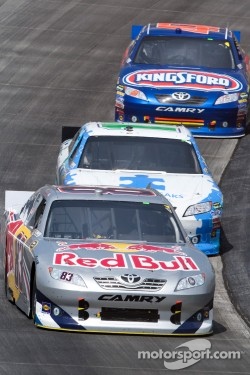 FIRST FOR THREE IS 600: Three current Camry drivers captured their first career NSCS victory in the Coca-Cola 600 at CMS -- Bobby Labonte, Casey Mears and Reutimann. Labonte, the 2000 NSCS champion, captured his first checkered flag in the 1995 edition of the race, leading 85 laps to best brother Terry who finished second. Mears only career NSCS win came in 2007when he took the lead in the 600 with just five laps remaining to claim the victory. Reutimann became a first-time winner when he and crew chief, Rodney Childers outwitted the field in a rain-shortened 600 in 2009, leading the final five laps en route to the win.

BUSCH CHASING MULTIPLE MARTIN RECORDS: One week after breaking a tie with Mark Martin for the fifth most career wins across NASCAR’s national touring series, Busch is now eyeing two more Martin records. Busch currently has 48 career NNS wins in 211 starts, and a win in Saturday’s NNS race at Charlotte would tie Martin’s all-time NNS win record of 49. A victory in Saturday’s event would also break a tie with Martin for the most career NNS wins at CMS (six).

WOUNDED WARRIORS: Toyota Racing will host a group of Wounded Warriors, along with their families, from Fort Stewart, Ga. at Charlotte Motor Speedway on Memorial Day weekend. Camry drivers Busch, Reutimann and Martin Truex Jr. will meet with the Wounded Warriors on Sunday prior to the running of the race.

NASCAR Sprint Cup Series (NSCS): Since the start of the 2011 season, Toyota drivers have combined for two victories, 11 top-five results, 24 top-10 finishes and have led 1,227 laps … After 11 races, Kyle Busch is third in the NSCS point standings, trailing leader Carl Edwards by 37 points … Denny Hamlin (13th), Kasey Kahne (18th) and Martin Truex Jr. (19th) are also in the top-20 in the standings … Three Toyota drivers have finished together in the top-10 in the last three points races, and five times overall in 2011 … Red Bull Racing Team gave fans the chance to enter photos at www.redbullracingusa.com/shutterspeed and have their pictures placed on the two Red Bull Camrys that will participate in this Sunday’s 600 … The fan-friendly race cars will be revealed on May 27 at the Red Bull Fan Day at the team’s shop in Mooresville, N.C. … Michael Waltrip Racing’s Fan Fest is set for May 25 at the team’s facility in Cornelius, N.C. … Kyle Busch Motorsports will host a garage sale at the team’s Mooresville, N.C.-based shop on May 26 … Bobby Labonte will host the Bobby Labonte Celebrity Golf Classic at the TPC Piper Glen in Charlotte on June 7 benefitting the Juvenile Diabetes Research Foundation.

Does the 600-mile race feel different than other events? “It depends on what kind of car you have. I’ve been in races in the 600-mile race where it’s been really, really easy and short, or it’s been a long, drawn-out, knock ‘em, sock ‘em kind of day. Hopefully, Dave Rogers (crew chief) and the guys can bring a really good M&M’s Camry for me and it will be a smooth race for us. I like running the 600 miles. I think it brings a new aspect to our sport – it’s longevity. People will say, ‘It’s too long. It’s boring.’ Well, it’s a part of the product and the history that we’ve had here on Memorial Day weekend for a long time that you run that extra 100 miles. Car preparation goes into that. Will your car make it? Will your engine last? Are the drivers fit enough to make it all the way?”

Could we see teams ‘gamble’ on tires this weekend? “Yeah, I think you can win the race like that. It’s part of clean air, track position is really big late in the race with us. If you get a long run, you definitely need tires. But if it’s a short run, it can easily be won on no tires or two tires, just like the last two weekends have been. Clean air means a lot. Cooler tires, tires get to cool down for three, four, five laps under caution, they’ll take off pretty good. They won’t last as long as somebody on four tires, but they’ll take off pretty good and you can run from 20 to 30 laps.”

Everybody looks forward to Charlotte...

NASCAR Nationwide Series (NNS): Since the start of the 2011 season, Toyota drivers have combined for six wins, 16 topfive results, 30 top-10 finishes and have led 1,069 laps … Kenny Wallace (seventh) is the top Toyota driver in the NNS point standings … Steve Wallace (eighth), Brian Scott (ninth), Michael Annett (11th) and Joe Nemechek (12th) are also in the top- 15 in the standings… One week after making his debut in the Charlotte NCWTS race, 2007 Formula 1 champion Kimi Raikkonen will make his NNS debut in Charlotte in the No. 87 Camry for NEMCO Motorsports … Cole Whitt will make his 2011 Nationwide Series debut driving the Pastrana-Waltrip Racing No. 99 Red Bull Camry in Charlotte.

How enjoyable is it racing in Charlotte? “Everybody looks forward to Charlotte – it’s kind of a home turf for almost everyone. There’s a little added emphasis there. It’s close to all the race teams and you get a lot of family members and everything that likes to come up to that race. They’ve been really strong this year at the intermediate tracks, as well as the short tracks. I’m looking forward to going there with Kevin Kidd (crew chief) and the team that I’ve got this year. Hopefully, we’ll have a good run in front of family and friends and employees of Joe Gibbs Racing, and we’ll start clicking off some good finishes and make our way back up in the points.”

Why do you have so much success (seven top-10s) at Charlotte? “Charlotte is one of those intermediate tracks that I first went to when I came down in 1989 as a driver. For some reason, I understand Charlotte and I really like it. I know all the grooves. I think I’ve ran that track forever and I look for help at every track I go to from my crew chief and my team members. I think that Charlotte is a track that I feel comfortable at. I feel like I know where I need to be and know what I need. That’s one reason why I like Charlotte so much.”