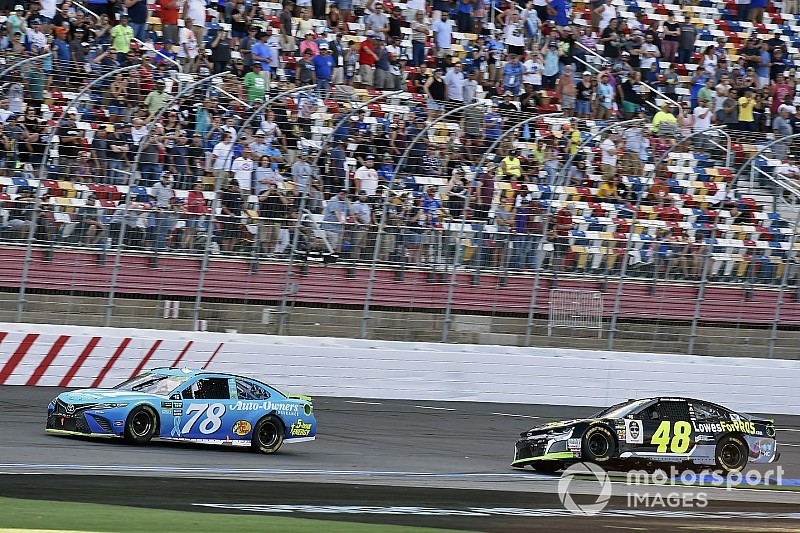 Martin Truex Jr. had the win slapped out of his grasp when Jimmie Johnson spun and collected him in the final lap of the Bank of America Roval 400 at Charlotte Motor Speedway.

A late-race multi-car accident triggered by then-leader Brad Keselowski allowed Truex to take the lead with three of 109 laps remaining, and it appeared the reigning NASCAR Cup Series champion might take the win for himself.

Truex and Johnson broke away from the pack on the late restart and ended up nose-to-tail on the final lap.

Johnson drove hard into the chicane on the frontstretch and locked up his brakes, sending him spinning and collecting Truex, which allowed Ryan Blaney to capture the win.

“Last corner desperation behind us, that’s what you get,” said Truex. “I gave him (Jimmie Johnson) the inside lane and he had the run through (oval Turn) 4 and I was real tight down there. I let him have the inside going down inside coming out of there to the chicane.

“He just over-drove it and was never going to make it and used me as brakes and turned us both around. It sucks, we could have raced side-by-side off the last corner for a win and that would have been cool.

“The fans would have been digging it, but instead we finished 14th and he’s locked out of the playoffs. I guess that’s what he gets.”

"He wasn't ever going to make it"

Truex said he believed the pressure Johnson felt of trying to advance to the next round of the playoffs forced him to drive hard into the final corner.

“He wasn’t ever going to make it through that corner whether I was there or not,” said Truex. “It was) just desperation on his part and pretty stupid really if you think about it because he was locked into the next round and now he’s out. I guess if there’s a silver lining, that’s it.

“It would have been really fun to take it to Victory Lane, but at the end of the day it wasn’t meant to be and we’ll move on to the next one.”

As for the first race on the Charlotte Motor Speedway Roval, Truex felt his early incident with Keselowski had robbed him of any chance at a good finish, but still, the No. 78 team fought back.

“It was crazy,” he said. “We at one point got spun by (Brad Keselowski) in the same corner and had to go to the rear – thought we were done,” he said. “Restarted 27th and drove out way up through there. You never knew what was going to happen today, on the one restart the (Keselowski) drove straight into the wall.

“Just trying to survive and we were in the right spot, we did everything right and we got spun out twice and there’s nothing you can do about guys running you over.”

Kyle Busch on Turn 1 pile-up: "I guess all of us are just stupid"