Truex takes Stage 1 win at Michigan after duel with Hamlin

Martin Truex Jr., who started the race from the rear of the field, rocketed through the field and claimed the Stage 1 victory at Michigan International Speedway. 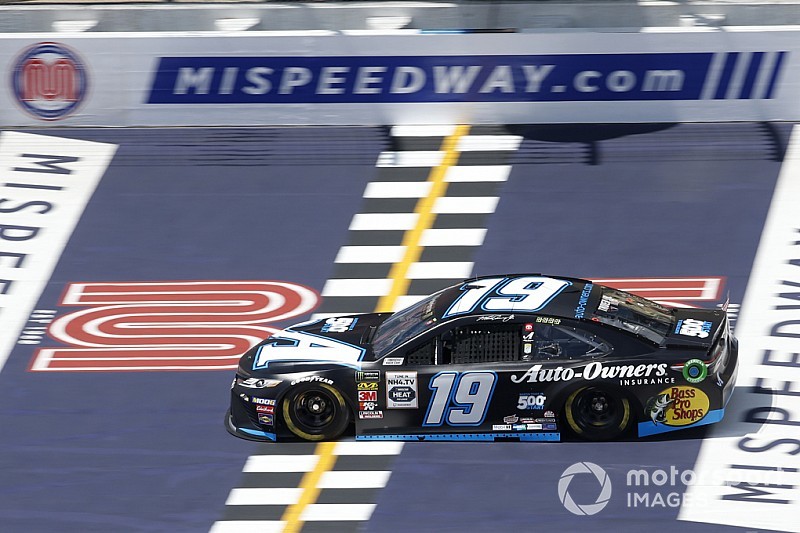 Truex emerged as the winner of the 60-lap stage after a wild back-and-forth battle with Denny Hamlin in the final five laps. Truex had taken fuel-only on his pit stop while Hamlin had taken four new tires.

Keselowski, who started on the pole, jumped out to an early lead.

Truex, who had to start the race from the rear of the field, already moved up to 16th after the first five laps.

After 10 laps, Keselowski maintained a small lead over Kevin Harvick as Logano – who won the June race – ran third.

Jimmie Johnson tagged the wall off Turn 2 on Lap 15 but was able to continue on and there was no caution. He eventually had to pit for a flat tire under green.

With 40 laps remaining in the first stage, Keselowski had built up about a 1.5-second lead over Harvick. Logano was third, 3.6 seconds behind the leader.

On Lap 26, Johnson was forced to return to pit road under green for another tire issue.

After 30 laps, Harvick had cut slightly into Keselowski’s advantage as Hamlin moved into the third position. Two laps later, Harvick was forced to pit under green with a flat right-front tire.

On Lap 40, Hamlin went to the outside of Keselowski off Turn 4 and moved into the lead for the first time in the race on the frontstretch.

With 20 to go, several other drivers elected to make their green-flag stops in order to get enough fuel to make it to the end of the stage.

Kyle Larson was penalized during his top for speeding on pit road and was forced to serve a pass-through penalty.

Once the cycle of stops was completed on Lap 48, Truex – who took fuel-only on his stop – cycled into the lead. He was followed by Logano and Hamlin.

On Lap 53, Hamlin got around Logano to take the second position as Harvick – after his early-race tire issue – cycled back to sixth.

With five laps to go in the stage, got past Truex to retake the lead exiting Turn 4. With three to go, Truex got back around Hamlin and returned to the top spot.