Defending NASCAR Cup Series champion Martin Truex Jr. was running second in the final stage of the Bristol Night Race when he spun after contact with Kyle Busch, ending his night. 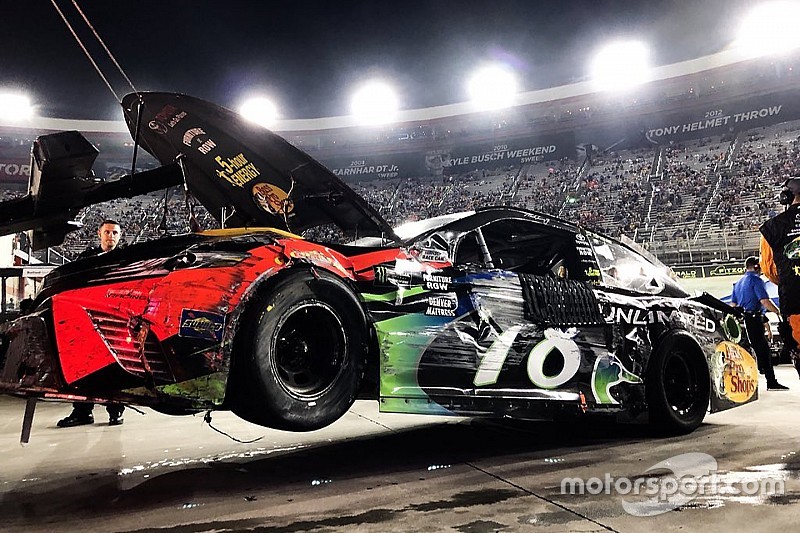 It’s no secret that the one place Martin Truex Jr. has struggled at in his Monster Energy NASCAR Cup Series career is on short tracks. In his last 12 starts at Bristol, he’s only scored one top-10 finish.

Although Truex was collected in a multi-car incident on Lap 2, he rebounded and was battling Clint Bowyer for the race lead when Busch got into his left-rear on Lap 433 of 500.

When asked if the contact was intentional, Truex, although frustrated, was a bit more understanding.

“I couldn’t tell you,” said Truex. “I’ve seen the replay real quick, but I didn’t really pay much attention to it. It’s hard racing at Bristol. The corner exit’s really slick where the VHT wore out. There’s some real slick patches.

“I’m sure (Busch) hit one of them. Probably didn’t obviously do it on purpose, but it’s hard Bristol racing.”

In fact, the Furniture Row Racing driver felt he and Busch were both to blame for the incident.

“Half his fault, half my fault for following (Bowyer) so long,” said Truex. “I should’ve knocked his butt out of the way because he held me up for 15 to 20 laps and burnt my front tires off screwing with him. Played too nice and got the crappy end of the stick.

“I feel like I probably should’ve took the lead there … and I wouldn’t have been in that position (with Busch). Sometimes you’re the nice guy and you get knocked out of the way. We’ll just have to race him a little harder next time.”

Kyle Larson: Second was "12 to 15 spots" better than we deserved