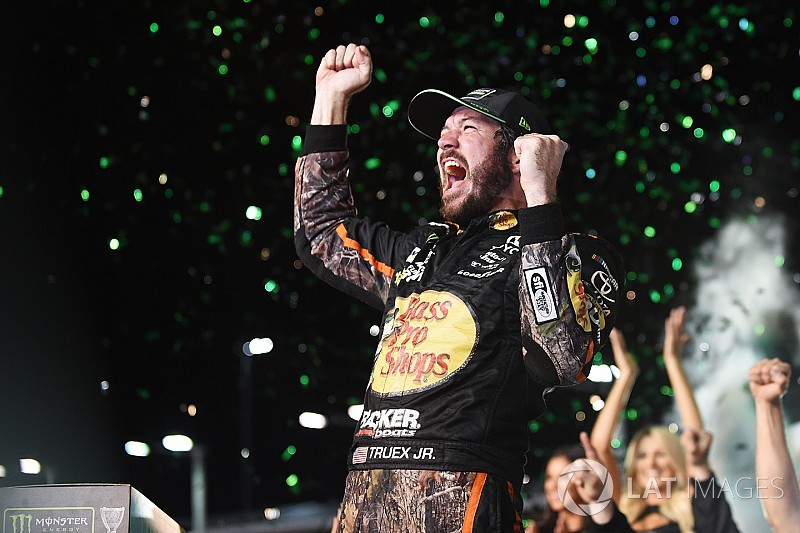 The accolades continue for NASCAR Monster Energy Cup Series champion Martin Truex Jr., both on and off the track.

Truex was named the National Motorsports Press Association’s Driver of the Year on Saturday night in Charlotte.

He and partner Sherry Pollex shared the NMPA Pocono Spirit Award for their tireless work with the Martin Truex Jr. Foundation, which raises awareness and financial support for pediatric and ovarian cancer.

“Sherry and I really appreciate everyone here for everything you have done to get the word out for the Martin Truex Jr. Foundation and the programs we’re involved with,” Truex said. “There’s no way we could do what we do without your support. Thank you.”

Pollex, who continues her courageous battle against ovarian cancer, held the Second Annual Sherry Strong Spin Along earlier that day and raised more that $63,000 for the fund.

Truex’s day started with Fan Appreciation Day at the NASCAR Hall of Fame, where the night before he introduced the video for NASCAR’s first champion Red Byron as the 1949 champ was inducted into the Hall.

Truex then turned the stage over to the Hall’s executive director Winston Kelly. It was an exchange with Kelly that first enabled the magnitude of winning the championship sink in for Truex. But he admits it hasn’t totally hit him.

“When I was at the Hall of Fame induction and got to help induct Red Byron,” Truex told Motor Racing Network. “Just to see some of the Hall of Famers there and talk to them and have them congratulate me and talk about how awesome the race was and how awesome our season was and how impressive it was, those kind of things kind of help push it along.

“Back before Christmas, we went to Levine’s Children’s Hospital here in Charlotte to give out Christmas presents—which is something we do with our foundation every year. Winston Kelly was there from the Hall of Fame. He says, ‘You know, you’re going to get in here with the stuff you’ve done.’ That was one of the things that initially was like, ‘Wow, I didn’t even think about that.’ But to think about that and then be there last night and put that all together, it’s amazing that a kid from New Jersey that started racing in go-karts got to where we’ve gotten to, it’s unbelievable.”

Life as a champion

As Truex aptly described his last two months since winning the title, “It’s been crazy, a whirlwind tour.”

“People keep asking me how the off-season went,” Truex said. “And I said, ‘What off-season?’ It’s been busy, but it’s been a lot of fun. It’s been fun to reflect and celebrate with the team here and there. Got to do a lot of fun things.

“And it’s not over yet. Going to the Super Bowl next week. There’s been a lot of fun stuff that we’ve been able to do, but it’s amazing how time flies.”

In just three weeks, the 2018 NASCAR season will kick off with Speedweeks at Daytona International Speedway. After such a phenomenal championship season that included eight wins, three poles and a remarkable 9.4 average finish with 2,253 laps led, does Truex and the No. 78 Furniture Row Racing team feel more pressure to continue that pace?

“I feel the pressure is less the more we do,” Truex said. “I feel like in ’15 we felt a lot of pressure because we hadn’t done all those things before and made the final four or won our first race together. I feel like it’s come easier since we’ve come down this road. ’16 went well and we just continue to build on that momentum and it feels like things come easier because we’re comfortable in what we’re doing. We’re confident in what we’re doing. We know we have a great team and things are working

“So it helps you to focus on all the little details and not stress out over the things you can’t control—the years when you’re not running that great and you feel like if something happens it’s the end of the world. These days, you know if something happens there’s always next week and you’re going to run good and you have confidence in your team. Honestly, we’re having so much fun together right now, our whole group. We really don’t feel the pressure. We thrive under it. We look forward to getting into those situations where those big moments happen.”

Mailbag: Should NASCAR use a choose cone for restarts?