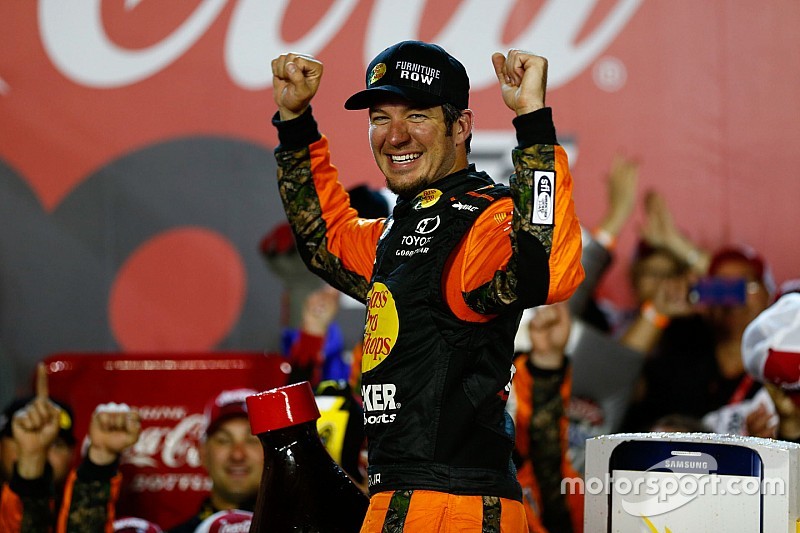 Martin Truex Jr.’s win at Charlotte Motor Speedway was worth the wait.

Although misfortune foiled the driver’s attempts at victory at Texas Motor Speedway and Kansas Speedway, where he led the most laps earlier this season, Truex would not be denied on Saturday night for his first win of 2016 -- and a berth in the Chase for the Sprint Cup.

Truex started from the pole and led a Sprint Cup Series record of 392 of 400 laps led — the most for any competitor at at Charlotte. Jim Pascal set the original record of 335 laps in 1967 at the 1.5-mile track. Truex's 588 miles led were the most in any NASCAR race in the history of the sport.

With a 1.7-second lead and 10 laps remaining, Truex extended his advantage to where he could back off and conserve fuel. Still, his margin of victory was 2.573-seconds at the finish over Kevin Harvick.

Truex said the reception line from his competitors and peers on pit road “meant a lot to me.”

“It’s just kind of sinking in now that we won the 600. Really proud of my team — everybody that made this possible, that believed in me, gave me this opportunity. Cole Pearn (crew chief), Jazzy (team engineer Jeff Curtis), my guys are something special. I want to thank all of them. This is a big day. Got the troops on the cars, this is a special weekend. It’s really neat to bring that name home (Gunnery Sergeant Jeffery E. Bohr Jr.) to Victory Lane. Just a lot of emotion right now. Not really sure it’s sunk in yet. Just an amazing day, an amazing weekend for all of us. It’s a weekend you dream about."

After leading the most laps at Texas (141), then starting from the pole at Kansas and spending 172 of 267 circuits at the points before a pit stop miscue cost him the race, Truex could have been down. But after sharing his girlfriend Sherry Pollex’s battle with ovarian cancer and coming out on the other side, Truex has learned not to sweat the small stuff.

Pollex was teary-eyed as she congratulated Truex in Victory Lane. “It’s amazing,” Pollex said. “I keep telling him that he had to lose all those races and that God was building him with character to win the big one. This is huge for us in our home town and our family — and for Johnny (Morris, owner of Bass Pro Shops) and Barney (Visser). We’ve been through so much. This is just icing on the cake. It’s so cool."

“I had confidence,” Truex added. “I had faith. I had confidence in my team. I’ve got a lot of great people behind me. Sherry, she gives me a lot of inspiration. And we keep on fighting. We never give up. We never quit. We always keep digging and I’m proud of my guys for sticking by me. They all did a great job tonight.
“There are so many fans that have supported us the last few years with so many heartbreaks. I really appreciate that. I really had fun tonight.”

It seems fitting that Truex should finally break through with a win on Memorial Day weekend. His team owner Barney Visser, the founder of Furniture Row served in the Vietnam War. The Denver native was a paratrooper in the 173rd Airborne Brigade. Truex fourth career Cup win was Visser’s third.

Several drivers were plagued by penalties on pit road. During the first round of pit stops during the competition caution on Lap 25, Ryan Blaney and Elliott were both busted for speeding. They dropped to the back of the pack. While Elliott recovered to finish eighth, a slow pit stop on the Blaney’s next stop mired the No. 21 Ford in traffic and he was lapped by Truex on Lap 188. With three laps remaining, Blaney was forced to pit with a cut tire and finished 19th.

During pit stops on Lap 254, Joey Logano was penalized for his pit crew going over the wall too soon. He served a drive-thru on Lap 257 and dropped to 21st — one lap down — before his ninth-place recovery.

The race was slowed by four cautions — the last on Lap 339.

Harvick maintained the point lead by 36 over his Stewart-Haas Racing teammate Kurt Busch. Truex gained two positions in the standings and is currently seventh.

France: NASCAR gets "maligned a lot" for falling short on expectations

Toyota on Truex's win: “We knew tonight was coming"