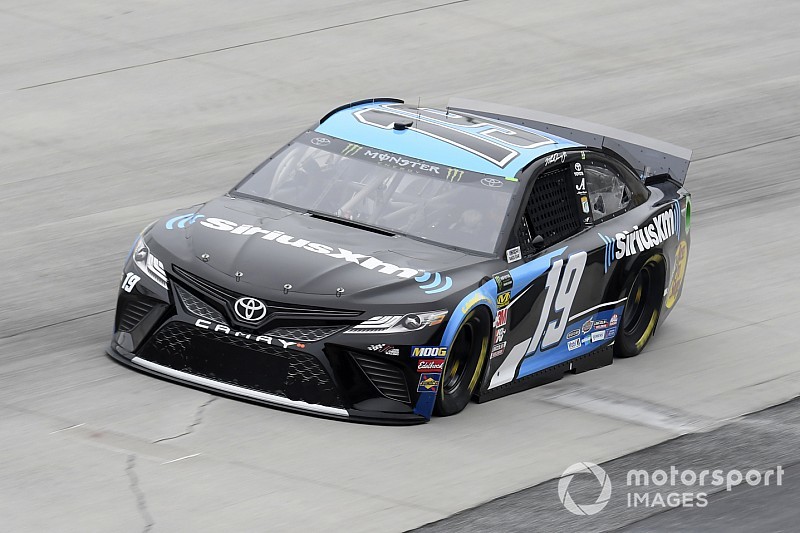 Truex had moved into second with three of 120 laps remaining in the stage and went Bowman went high in Turn 1 on the final lap, Truex wasted no time grabbing the lead and his first stage win of the 2019 season.

Following a break between Stages 1 and 2, most of the lead-lap cars elected not to pit and Keselowski inherited the lead when Joey Logano decided to pit.

The race restarted on Lap 130, with Keselowski out front, followed by Elliott, Larson and Harvick. Logano lined up 24th.

With 90 laps remaining in the second stage, Keselowski maintained a small lead over Elliott with Harvick in third.

On Lap 158, Harvick – who had complained about a possible loose wheel – had caught Elliott and joined the battle with Keselowski to contend for the lead.

With 70 laps to go in the stage, Keselowski held a small advantage over Elliott, who continued to get challenged by Harvick for the second position.

On Lap 178, NASCAR parked the No. 77 driven by Quin Houff for the remainder of the race for its repeated failures to meet minimum speed.

A round of green-flag pit stops began on Lap 181 with Truex one of the first to hit pit road. Keselowski, the leader, made his stop shortly afterward.

Once the cycle of stops was completed on Lap 190, Elliott returned to the lead, followed by Keselowski and Bowman.

With 40 laps left in the stage, Bowman had moved into second, just over a second behind Elliott. Keselowski was third, Harvick fourth and Truex was running fifth.

Bowman had got to Elliott’s rear bumper with 20 laps to go. Harvick was in third and Truex in fourth. Keselowski had dropped to fifth as there were concerns his team didn’t get his gas tank full on his pit stop.

Bowman finally worked his way inside and around Elliott in Turn 1 to take the lead for the first time on Lap 224.

With 10 laps remaining in the stage, Bowman held a small lead over Harvick, who had moved into the runner-up position. Truex was now third and Elliott had dropped to fourth.

Truex got around Harvick with three to go and tried to challenge Bowman for the lead.