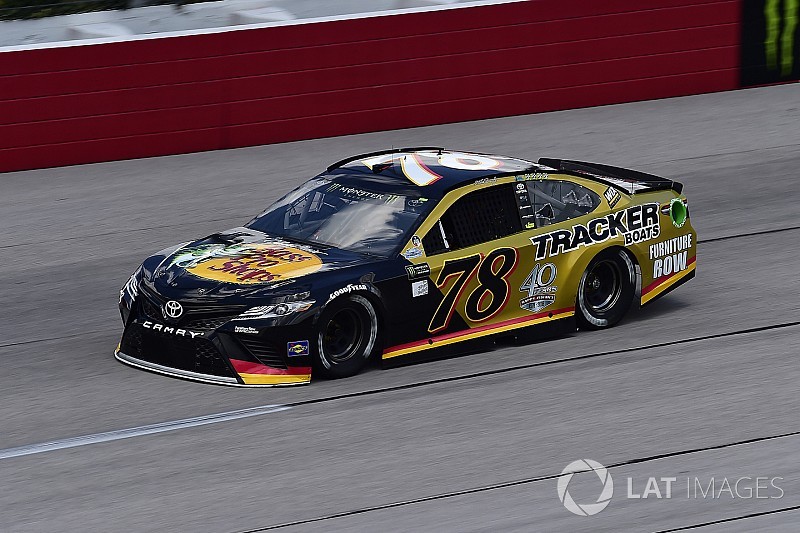 Kyle Larson led 78 laps in the first stage at Darlington Raceway on Sunday — but it was Martin Truex Jr. sliding by the No. 42 Chevy in Turn 4 for the win on Lap 100.

For Truex, it was his 16th stage win of the season.

The field took an additional parade lap prior to the start of the Southern 500 as Richard Petty enjoyed his time on the track and in front of the field. Kevin Harvick finally led the field to green.

Blaney hit the wall on Lap 3. He pitted on Lap 6 and dropped to 40th, two laps down.

On Lap 14, NASCAR reported on the radio that Trevor Bayne had a right rear tire rub. Coming through Turn 1 on Lap 15, the tire blew on the No. 6 Ford. Bayne wrecked in Turn 3 and collected AJ Allmendinger.

“Man, it just blew up,” Bowyer said. “Pretty inopportune time for it to happen, but it’s never a good time. I guess it was my turn. We’ll just go to Richmond and do the best we can.”

Kyle Busch was the first car off of pit road and led the field to the restart on Lap 22 followed by Larson, Hamlin, Truex, Keselowski, Logano, Jones, Kurt Busch, Harvick, McMurray and Kenseth. Truex pushed Larson to the lead on the restart and the No. 42 Chevy checked out.

Stenhouse ignited the second caution on Lap 40 after hitting the wall coming out of Turn 4 and onto the front stretch.

Larson extended his advantage over Truex by a second-and-a-half after the first five laps. Hamlin passed Kyle Busch for fourth on Lap 51. In the first 10 laps after the restart, Larson’s lead was two seconds. Harvick passed Truex for second on Lap 57. Hamlin remained fourth followed by Kyle Busch, Kurt Busch, Kenseth, Jones, Keselowski and Johnson.

Sixty laps into the stage, Larson’s lead was 3.3-seconds ahead of Harvick. Kenseth charged passed both Busch’s and into the top five by Lap 65.

“I’m up in the rubber, crashing loose,” Kenseth told the team.

With 30 laps remaining, Larson had led 49 of the first 70 laps, but Harvick had cut the No. 42 Chevy’s lead to under two-seconds. Twenty-six cars remained on the lead lap with 25 circuits to decide the stage.

Larson battled Danica Patrick — who was trying to hold on to the lead lap — and allowed Harvick to close in top 1.5-seconds on the No. 42 Chevy with 20 laps to go in the segment. Truex was third followed by Hamlin, Kyle Busch, Kenseth, Keselowski, Jones, Kurt Busch and Johnson. McMurray passed Johnson for 10th on Lap 84. Keselowski passed Kenseth for sixth and Jones came along and knocked the No. 20 Toyota to eighth.

With 13 laps remaining, Kurt Busch moved by Kenseth for the eighth — and Harvick cut Larson’s lead to under a second but as his tires went away, both Truex and Hamlin passed the No. 4 Ford.

Twenty-one cars remained on the lead lap after the first 100 laps.