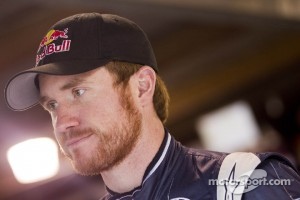 CORNELIUS, N.C. – Michael Waltrip Racing announced today that it has added two more events to Brian Vickers’ 2012 NASCAR Sprint Cup schedule in the No. 55 Toyota Camry. Vickers, who led 125 laps and finished fifth in his debut with MWR at Bristol Motor Speedway two weeks ago, will pilot the No. 55 at Infineon Raceway on June 24 and Watkins Glen International on Aug. 12.

“Brian did such an amazing job at Bristol that we wanted to reward him with more races,” said co-owner Michael Waltrip who will drive the No. 55 in four races. “It has as much to do with how he interacted with (crew chief) Rodney Childers and the crew as what he did on the race track. They really enjoyed his input and his professional approach, and he was a great teammate to Martin Truex Jr. and Clint Bowyer. Those guys were really impressed with how he engaged with them and managed his race car. Brian is a great young driver who is hungry to show what he can do. In my mind, he earned these extra races with his approach and attitude, and I’m so happy we were able to offer them. Brian’s contribution to the team has continued the momentum Rodney and Mark Martin created pushing the No. 55 up to eighth in owner points.”

“I purposely waited for an opportunity that would allow me to be competitive and this is what I have found with Michael Waltrip Racing,” said Vickers who earned Toyota Racing Development its first Chase for the Sprint Cup entry in 2009.

“I could see all of the progress MWR has made from the outside, and when I was able to get to experience it first hand at Bristol, I was so impressed. It’s hard to explain, but each one of these team members and each one of the drivers truly cares about the other. There is a team atmosphere here and they welcomed me with open arms. That cooperation is how we were able to put three cars in the top five at Bristol. People don’t think of me as a road racer, but I love road racing and am so happy I will get a chance to compete at Infineon and Watkins Glen.”

Mark Martin will drive the No. 55 in 24 races plus the All Star race.

Vickers, 28, owns two victories and 11 poles. Until this season, the Thomasville, N.C. native competed full time in the Sprint Cup Series for eight years. In 2011, he scored three top-five and seven top-10 finishes.

Vickers began his Sprint Cup career in 2003 driving for Hendrick Motorsports before moving to Red Bull Racing in 2007. Vickers has raced only Toyotas since the manufacturer entered Sprint Cup competition in 2007.