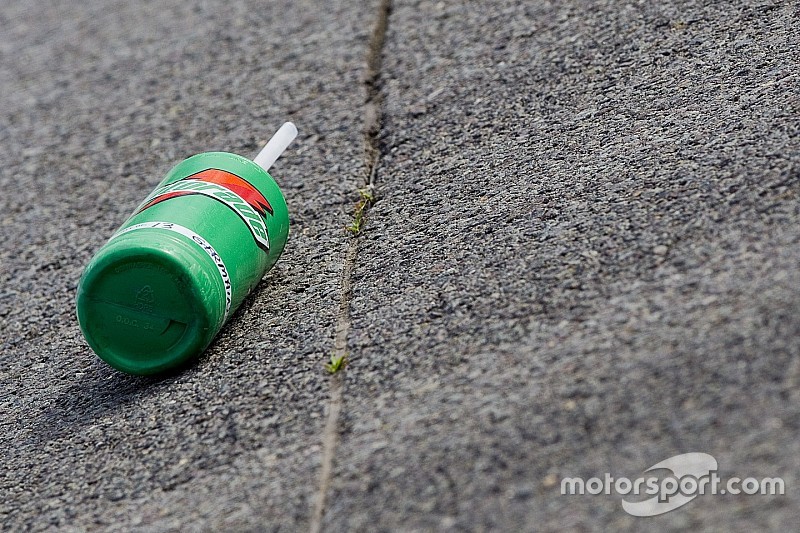 Following an iffy debris caution at New Hampshire, multiple drivers and NASCAR have commented on water bottles and the way they are discarded during any given race.

During a debris caution in last weekend's NASCAR Sprint Cup race at New Hampshire Motor Speedway, a rogue drink bottle was spotted at the bottom of the circuit.

It's a non-issue ... Until said bottles trigger said debris cautions. More than once has a NASCAR race been placed under yellow for debris that turned out to be nothing more than a harmless water bottle, which can obviously alter the outcome of an entire race.

Keselowski on why they need to be tossed

Drivers toss empty water bottles from their cars all the time, this isn't something new. Brad Keselowski explained to one fan on Twitter, "Empty water bottles don't handle the corners very well. Sometimes fall down on the floor boards and cause trouble.

"About 20 of them on the track at any given time. They aren't harmful but seem to make nascar randomly nervous."

If someone is purposely trying to manipulate a caution, that’s not something that is going to be tolerated

"We all know a caution shouldn't be thrown for a water bottle," tweeted Jimmie Johnson. Teammate Dale Earnhardt Jr. concurred: "Totally agree. Keep it in the car. Toss it during a pit stop. Not all that difficult people. Worse than water bottles are the visor tear offs at the events that start late evening. Folks need to keep their trash."

The six-time series champion later explained that his No. 48 team uses GIDS (Gatorade In-car Drinking System), rather than bottles.

On Sirius XM NASCAR's 'The Morning Drive,' NASCAR Executive VP/Chief Racing Development Officer Steve O'Donnell offered his insight. "Coming off pit road sometimes you see it down on the apron where some water bottles are discarded. I think in this case, we candidly weren’t really sure and knew it was potentially one of the drivers’ ones that are a little bit different with the material they’re made out of.

“If someone is purposely trying to manipulate a caution, that’s not something that is going to be tolerated, and we’ll have to look into that further as we go and we’ll address that with the teams also.’’

So is the issue here drivers discarding water bottles on the track or is it NASCAR throwing cautions for it?

Johnson yet to extend contract, but has no desire to leave Hendrick