Watkins Glen shakes up the points

A big shakeup after a wreckfest at the Glen.

Watkins Glen gave us another thrilling finish. This track is beginning to get a solid reputation for turning out some seriously awesome finishes. The race featured multiple wrecks and some serious shuffling of point’s standings positions when all was said and done. The two race dominators, being Marcos Ambrose and Kyle Busch, ended up on separate pit sequences as the caution came out. Ambrose got caught on pit road and ended restarting 14th and Kyle Busch was in the lead.

Busch would hang onto the lead, while Ambrose would be mired in traffic and never be able to regain his early race form. The first major wreck of the race, which involved the likes of Matt Kenseth, Dale Earnhardt Jr and Kasey Kahne would breed the next and final major caution.

This caution would be the catalyst for Ambrose’s day as he was put into a position where he could not make any progress on the drivers in front of him. Ambrose noted in his interview that he felt something didn’t feel right with the car. Had he been able to stay on the correct pit sequence and not get trapped around 15th, I think he would have handedly won this race today. Instead, he would get involved in a wreck with Max Papis which completely destroy his car and would finish 31st. 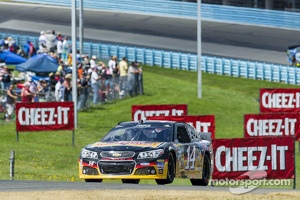 For Kyle Busch, this win solidifies his already solid standing as far as the chase is concerned. Busch now has three wins this year and is just one behind the league lead (Kenseth, Johnson with 4). Busch showed incredible road course prowess as he was able to hold off an incredible charge from Brad Keselowski. I think Brad could have dumped Busch but didn’t quite have enough real estate to get the job done. They ran similar lines and Busch did a pretty good job of not allowing Keselowski to run the preferred line.

As I noted in my previous article, I expected that Keselowski would be a frontrunner and with his second place finish, established himself as one of the chase bubble drivers who might be able to make the chase without a win. Keselowski now sits 8th in points and I feel that if he knocks down two more top 5’s, he will be making the chase this year.

As far as points are concerned, Martin Truex Jr entered the top 10 with a 3rd place finish, but has just a 2 point lead over 11th place Kurt Busch. Poor finishes for Jeff Gordon and Kasey Kahne would drop both drivers out of the top 10. The final four races are going to be incredibly tight as far as the wild card positions are concerned. 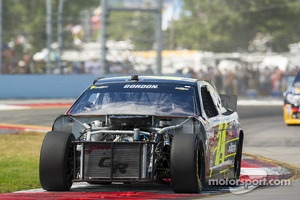 I believe that Kasey Kahne will be back in the top 10 as the remaining schedule contains tracks that Kahne is projected to do well at. With Michigan, Bristol, Atlanta and Richmond remaining, Kahne has a shot at quality finishes at all four. Jeff Gordon is the real question mark as he has yet to win a race this year and has been extremely inconsistent all season. We’ll see if Jeff can regain some spots after Michigan.

The Sprint Cup Series moves out to Brooklyn, Michigan for the second time this year. I expect Greg Biffle to be good again, but I’m also looking for the #20 car of Matt Kenseth to reestablish himself as a dominant force for the championship this year. Kenseth absolutely needs to win one of the next four races and has great chances at Michigan, Bristol and even Atlanta. With the points being so tight from 9th to 14th, it is without question that we will see another shakeup after the Pure Michigan 400.

JGR: Saving the best for last with Kenseth, Busch