Welcome to the new Brickyard 400 - a road course in the Chase?

The answers to NASCAR’s problems at Indianapolis Motor Speedway have been sitting in plain sight all along, you just have to train yourself to look in the opposite direction.

Want to improve the racing at the Brickyard 400 and keep the tradition of visiting the iconic motorsports venue on the Sprint Cup Series schedule? Want to make the race relevant again and perhaps give fans more of an incentive to attend in person, rather than watch on TV? Want to give fans the road course in the Chase they have been craving?

Here’s the fix: Run the Brickyard on the Grand Prix of Indy road course and move it on the schedule to September and make it the first race of the championship Chase.

Could the answer to what ails the Brickyard 400 really be so simple?

After almost 20 years covering NASCAR, I’ve learned issues in this sport rarely are, or work out that way even with the best of intentions.

The value of racing at IMS

But as I pointed out in an earlier column following last month’s Brickyard 400, if NASCAR ever intends to make the race “great again,” it’s going to have to make some hard choices.

That includes deciding whether there is still value to NASCAR competing on the most historic of all motorsports venues. Certainly, drivers and teams believe there is. Winning the Brickyard remains one of the biggest accomplishments of a driver’s career.

The racing, itself, has never been very good. A 2.5-mile flat rectangular track is just not conducive to side-by-side stock car racing. Even the past two years of vastly different aerodynamic packages did little to change the mostly single-file nature of the race.

In addition, the Brickyard’s current date in mid to late July has been brutal in terms of the hot summer weather. Surely an early September date could help in that regard as well.

As my colleague, Lee Spencer, pointed out this week, NASCAR says they have heard the fans who are calling for more road courses, praising the Cup series’ annual stops at Watkins Glen, N.Y., and Sonoma, Calif. for producing some of the sport’s most exciting races.

This change can accomplish all of those goals without having to alter the makeup of the current track schedule.

The only other change necessary would be to move one race out of the Chase – my pick for that would be Chicagoland Speedway. I know NASCAR likes starting the Chase in a big market, but the Brickyard tradition certainly makes up for that. It’s just as easy (if not easier) to get to Indy then to Chicago.

And would anyone outside of the track itself and its owners really argue to keep a 1.5-mile “cookie cutter” oval in the Chase over a road course? (HINT: Nope).

So, here’s how it could work.

If you take a peek at the most recent layout of the Indy road course, you will see the race is still run over the famed bricks and the largest viewing areas for fans in the current grandstands are in Turns 4 and 1 and down the frontstretch.

Anyone looking at where the fans gravitated to at this year’s Brickyard (even with its noticeable drop in attendance in recent years) saw those were the same areas fans favored when the entire oval track was used. Generally, that’s because it offers the largest view possible of the racing.

In addition, the road course layout includes several spectator seating areas throughout the infield, which would in all likelihood produce excellent vantage points for exciting racing – new aero package or not.

With NASCAR’s new five-year track agreements in place, racing at Indianapolis Motor Speedway is not going away anytime soon.

If NASCAR really wants to fix the racing there while holding fast to the historic nature of the venue, it’s time to make a move – that on the surface at least – appears to address the concerns of teams, drivers and fans. That doesn’t happen very often.

And in the end, it’s simply a matter of driving in the opposite direction. 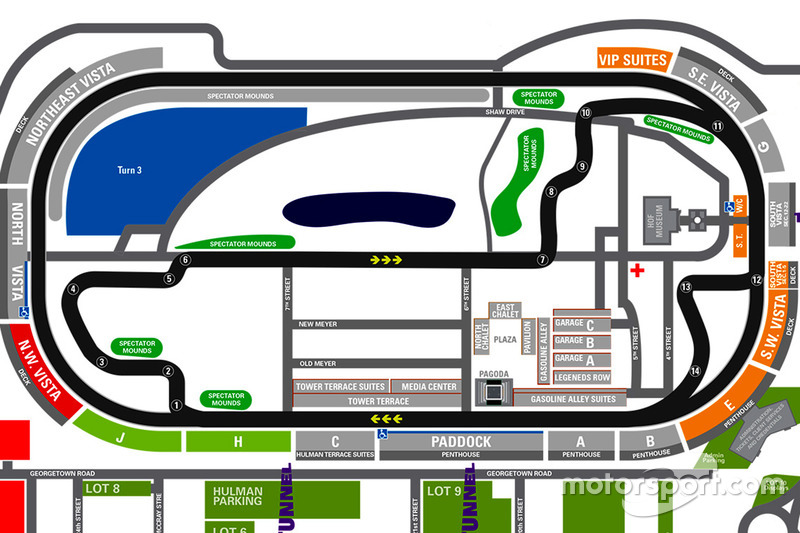