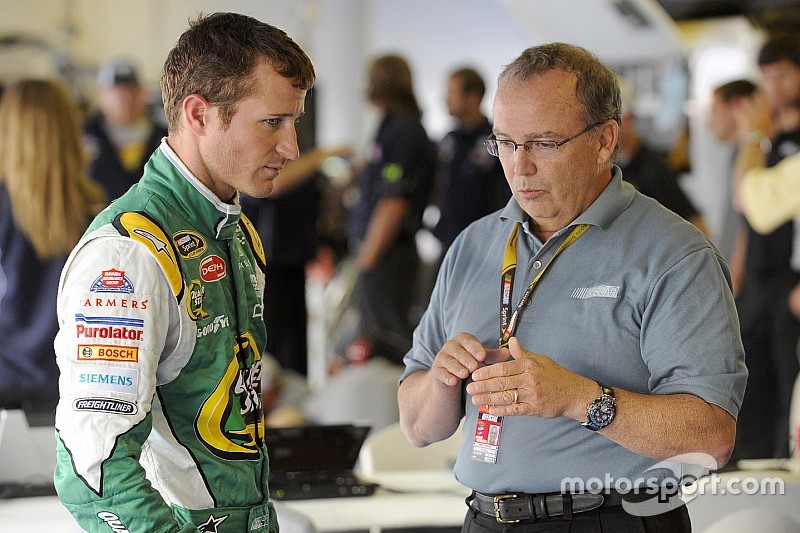 Bodine grew up the middle brother with his elder sibling, Geoff, and younger brother, Todd, in Chemung, N.Y. Their father owned and operated Chemung Speedrome and Brett credits being around racing his entire life as making it a natural fit for him.

“Our dad owned the speedway, but I really learned about racing from being around my uncles and of course following Geoff around and learning from him,” he said. “I can’t thank Geoff enough though because he always made room and time for me and I was 10 years younger than him.”

Bodine started racing local division cars at Chemung and eventually moved up to what is now known as the NASCAR Whelen Modified Tour. He had success at tracks throughout the northeast and New England much like his older brother did a decade before him.

Bodine won over 30 races in a modified and enjoyed his time driving in NASCAR’s oldest race car. Three of those wins came in the series now known as the NASCAR Whelen Modified Tour.

“I never ran for points as most car owners I drove for wanted to run the bigger races that paid better and not necessarily the points races,” he said. “I enjoyed racing modifieds and was excited when I got to move up to the NASCAR national series.”

Moving up the ranks

Bodine jumped to what was then known as the NASCAR Busch Series in 1985 and in 1986, driving the famed No. 00 car, won twice and finished second to Larry Pearson for the season championship by seven points.

He would finish with five wins in the series before moving up full-time in 1999 to what was then called the Winston Cup Series.

Bodine would finish his Cup career with 480 starts over 18 seasons with one win (North Wilkesboro – 1990), 16 top-five and 61 top-10 finishes and five poles. As for a favorite track he competed on during his career, Bodine really didn’t have one.

“There wasn’t a track that I didn’t like, but I always liked the ones I raced the best at,” Bodine said. “I enjoyed racing Daytona (International Speedway) in July and loved Martinsville Speedway. But I also enjoyed the road courses, too.”

After being unable to secure sponsorship to continue his team and not finding an open ride from a car owner, Brett knew it was time to move on and that’s when a chance meeting with Bill France Jr. and Mike Helton opened a door of opportunity.

“In February of 2004, Bill Jr. and Mike talked to me and asked me if I would be interested in coming to work for NASCAR,” he said. “I asked them to let me think about it and in April of that year I decided to take their offer and I told them if I was coming on board I was here to stay.”

Bodine took over pace car driving duties after the passing of Elmo Langley and has led Cup Series races to green ever since. He also worked for Gary Nelson, who was the Cup technical director when he first started at NASCAR.

I love what I do and being a part of the Monster Energy NASCAR Cup Series. I enjoy what I do on race days and I think it helps having a former driver on the track on race days.

While Bodine has a job on race days, his responsibilities are much more than just driving the pace car as he also serves as chairman of the Driver Approval Committee.

This is a committee that reviews driver resumes, part of the process aspiring drivers must take to be allowed to compete in NASCAR race divisions and tracks.

“This is probably the most rewarding part of my job today because I get to work with younger drivers and helping them in their NASCAR careers,” he added. “It’s a lot of work but I love it because when you watch a driver learn and move up the NASCAR ladder, it’s satisfying helping them achieve their goals.”

When Bodine first started working for NASCAR over a decade ago he also worked closely with the engineers and designers of the “Car of Tomorrow,” including its enhanced safety aspects.

“I was the test driver and tested the new car and I enjoyed being a part of helping make our sport safer,” he said.

Bodine looks back with fond memories of his racing career and is still amazed he and his brothers all achieved success in NASCAR.

“Who would have thought three brothers from little small town Chemung, N.Y., would all make it in NASCAR,” he said. “I grew up watching Geoff race and win everywhere and although Todd got started late, he was a natural and went on to win a truck championship. I had success, too, and was proud of the longevity I had in the sport as a driver.”

Bodine also looks back with fondness of some of the great memories at the track.

“It was really special watching my brother (Geoff) win the Daytona 500,” he said. “That was a good day. But I also remember watching his accident at Daytona in the truck and that was a tough day.”

Bodine said he was glad he waited until he was older to have children because it has allowed him to spend time with them, including their participation in racing and other sports.

“I love going with my kids to their races at Millbridge Speedway,” Bodine said. “I really enjoy watching Alex, twins Kami and Eli all race and we all work on our cars in our garage. Alex, who’s 16 and started racing when he was 10, and Kami and Eli both started when they were six years old.

“All of our kids play sports and I really enjoy going to watch them play other sports, too. I’m lucky that I was blessed with kids later in life so I have the time to spend with them now and be a part of their lives.”

Bodine, like a lot of other retired drivers, still interacts with fans, new and old.

“It’s amazing that as long as I’ve been out of the race car I’ll still get items sent to me that people have asked me to sign or they’ll come up to me at the race track and talk about watching me race way-back-when,” Bodine said.

“NASCAR race fans are the most dedicated of any sport and they remember everything. Fans never forget things and I’ll still have fans come up to me and ask me about a win I had somewhere or something that happened in a race from years ago.

“They’re great and I want to thank all of them because they gave me an opportunity to race for a long time and still work in a sport that I love.”

Send in your questions for the NASCAR Mailbag