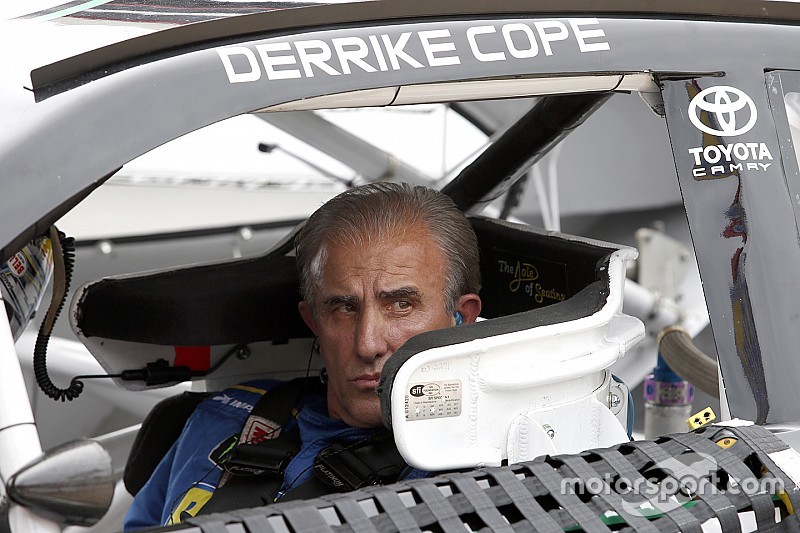 His demographic is closer to the traditional fans than it is to the next wave of teenage stars coming down the pipe.

But Cope still has fond memories of his successful run in the No. 10 Bob Whitcomb-owned Chevy in the 1990 Budweiser 500 at Dover Downs International Speedway.

“Twenty-seven years ago, it seems like it was just yesterday,” said Cope reminiscing about his second career Cup win on June 3, 1990. “I know when it was. I just haven’t paid a lot of attention to it.”

For the Spanaway, Washington native, it was his second — and last — Cup victory. Cope won the Daytona 500 earlier that year when Dale Earnhardt cut a tire while leading on the final lap.

What Cope is doing now

On Saturday, he wasn’t behind the wheel of a race car. Cope, 58, was pulling a wagon full of springs and shocks through the Dover garage to the Premium Motorsports trailer. He has partnered with Jay Robinson to pilot the No. 55 Chevy this season. However, the spring race at the Monster Mile was not on the veteran’s part-time schedule.

“What I’m doing right now is the shock absorbers for Premium Motorsports for the 15, the 55 and the 49 truck,” Cope told motorsport.com. “Then I drive the 55 on a limited basis. I’m enjoying that. It’s nice to be back in the Cup series — and I’m enjoying these cars. Trying to understand them and try to find what their needs are.

“It’s a bit of a process, but it helps to be able work on the shocks and work with the cars and the setups. It helps to better understand them and it correlates when I’m on the driving end, what I’m feeling and what we’re doing with the shocks.”

After a five-year absence from the Monster Energy Cup Series, while he focussed on the Xfinity tour, Cope is working on and off the track to get up to speed. In eight starts this season, Cope’s best finish was 31st twice. However, with the exception of an engine failure at Kansas Speedway, Cope has been running at the finish in each of his starts.

“I’m on a quick learning curve,” Cope said. “I’m hoping to get a little better than we’ve been lately. I missed not running out there today, but we’re a little behind on cars. I’ve found a sponsorship for Pocono next week, so I’m really concentrating on that.

When Cope was victorious in this race at the Monster Mile in 1990, did he think he’d still be racing 27 years later?

“I really didn’t know then,” Cope said. “I don’t think I was much into looking into the future. I was more about staying within myself at the time. I feel fortunate — at this juncture — to still be able to be a stable fixture in this sport in some capacity or another whether it was the Xfinity Series or now the Cup series again. And still be working on race cars for a living.

“It’s a gift. That’s what I’ve always thought it’s been. I’m just lucky to still have the opportunity.”