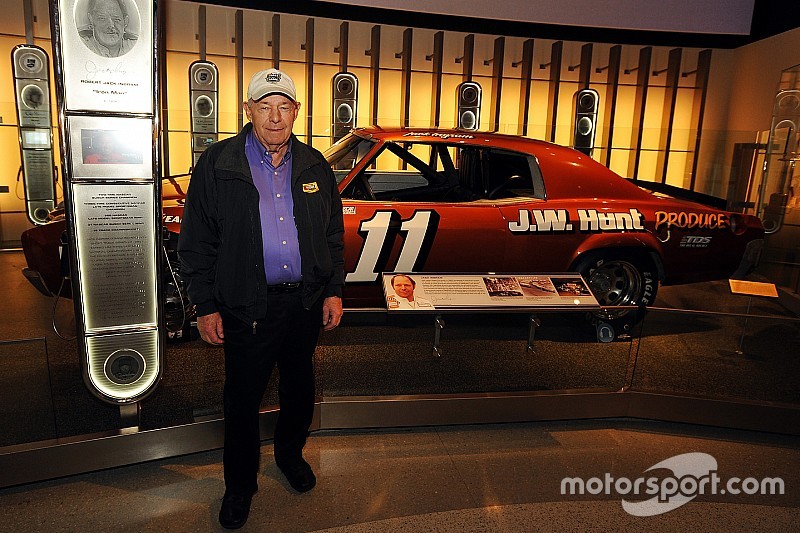 NASCAR Hall of Famer looks back on successful NASCAR career with pride.

If you were a fan of stock car racing back in the 1980’s there was one driver known by his nickname who came along before other well-known drivers from the decade such as ‘The Intimidator’ or ‘Awesome Bill from Dawsonville’ and that was the ‘Ironman’ Jack Ingram.

Ingram was the first full-time driver from what was known as the NASCAR Busch Series to gain induction into the NASCAR Hall of Fame in 2014 after a stellar career that saw him score two series championships in 1982 & 1985.

The Asheville, North Carolina native also finished in the top-10 in the final points standings for eight consecutive seasons between the inaugural season in 1982 through 1989.

Motorsport.com recently caught up with Ingram at his race shop in Asheville to get a glimpse of what the hall of famer is doing these days.

Ingram was already a legend at short tracks throughout the Carolinas and eastern United States by the time NASCAR decided to start the series that is now known as the NASCAR Xfinity Series in 1982.

The series evolved from the Late Model Sportsman Division that operated from 1968-1981.

Ingram won three straight championships between 1972-74 in that division. It was during this period the name ‘Ironman’ was born.

“Back in those days you had to race several times a week all over the place if you wanted to win a championship,” said Ingram. “One weekend over Labor Day in 1973 I raced in six races over five days five states. I raced over 1,750 laps over that period and won four of those races. After that people started calling me the Ironman.”

His journey began on a Thursday winning a 100-lap race in Columbia, S.C. He then drove to Beltville, Maryland for a race on Friday also winning that 250-lap race. The closest he got to home was on Saturday winning a 300-lap feature at Lonesome Pine Raceway in Coeburn, Virginia.

Ingram next competed in Maryville, Tennessee winning again in another 300-lap event on Sunday afternoon before flying to St. Paul, Minnesota for a 500-lap race on Monday afternoon coming home fifth.

Ingram caught a plane and made it to Nashville, where he race later that night finishing fourth in a race he almost missed.

“I had to fly commercial back then and barely made it to the airport in time for my flight to Nashville,” Ingram said. “I was the very last person to get on the plane and when I got to Nashville, I changed into my driver’s uniform in the back of a cab on the way to the race track.”

Ingram was an Ironman especially during that 1973 season. He competed in 83 points races that season, winning 35 of those along the way.

Coming to Daytona with a dream

Ingram competed in a Late Model race at Daytona International Speedway in 1975 with just himself and one crew member working on the car. Ingram was able to team up with another future NASCAR Hall of Fame driver, Junior Johnson, who served as his crew chief.

“I built a car and took it to Daytona in 1975, sat on the pole and went on to win that race,” said Ingram. “Junior Johnson volunteered to be my crew chief because you had to have one to run the race.”

Johnson’s influence and relationship with NASCAR also paid dividend during the event when Ingram thought he was going to be black flagged.

“I had a hole in the top of my windshield and NASCAR wanted to black-flag me,” Ingram added. Junior talked the officials out of it and said he would fix it. He put some tape over it and we went on to win the race.”

While 31 of Ingram’s 33 wins in the NASCAR Busch Series came on short tracks, he’ll never forget his win in 1975 at Daytona.

“That was a great feeling to be in Victory Lane in Daytona,” he said. “To win with just me and one other person working on the car and Junior there too, that was a great day.”

The shorter schedule was something that Ingram adjusted to quickly after running nearly triple that many races before in the old format.

“Man running that series felt like a vacation compared to what we had to do before to win a championship,” Ingram said. “I looked forward to that series because I had already won nearly half of the races I’d ever run at the tracks on the schedule that first year.”

All of Ingram’s wins that first season came on short tracks, highlighted by three at Hickory Motor Speedway and one at his home track – Asheville Motor Speedway.

Tough competition in the early 1980’s

Many of NASCAR’s best short track drivers in the country came south to participate in the NASCAR Busch Series as the schedule featured mostly short tracks during that time.

Ingram was pilling up the wins, but he was also facing some tough competition with the likes of Sam Ard, Tommy Ellis, Tommy Houston and Ronnie Silver – just to name a few.

In fact, it was Ard who kept Ingram from winning a second consecutive title in 1983 edging him by 87 points to win the second championship in the history of the series.

“Sam was a tough competitor and raced me hard all the time,” said Ingram.

Ard would also win in 1984 with Ingram second again before Ingram won his second series title in 1985.

Ingram also didn’t let age slow him down. He won 31 races and both of his titles between the ages of 45-50.

When Ingram retired from full-time driving in 1991, he held the record as the winningest driver in the history of the Busch (now known as Xfinity) Series. He still remains in the top five in all-time wins to this day.

Ingram continued to race at local short tracks for another 12-15 years before stepping back and helping younger drivers at short tracks.

He also finished in the top four in the final standings every year between 1982 and 1987.

Ingram still has legions of fans and he’s reminded daily how much they appreciated his NASCAR career.

“I still get this every day at my race shop from fans,” said Ingram holding his hand full of cards and letters from race fans. “The fans we’re always real supportive of me and my racing career. They have always been mighty good to me.”

Ingram was so popular that once at a race in Augusta, Ga., in 1965; young kids got together and gave Ingram a trophy. He put the trophy on display at the NASCAR Hall of Fame in Charlotte, where it remains to this day.

“I still try to go out and make appearances for the NASCAR Hall of Fame and also try to go anywhere someone wants me to go if I can,” said Ingram. “Some I get paid for and some I don’t but I still love seeing the fans.”

Two-day shows for NASCAR Cup weekends on the rise