The Wood Brothers have had many Memorial Day weekends to remember over the years, but 2012 is shaping up to be one of the best ever. 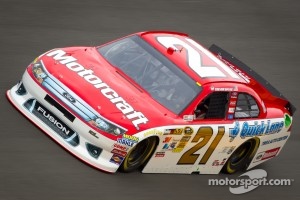 Leonard Wood, the team’s long-time crew chief, was selected this week to be a member of the fourth class of the NASCAR Hall of Fame, and the family’s Motorcraft/Quick Lane/DAV Ford Fusion will start the Coca-Cola 600 from the 13th starting position after Trevor Bayne turned a lap at 190.268 miles per hour.

For Leonard Wood, having the team’s car safely earn a starting spot for one of NASCAR’s showcase races was like the icing on his cake.

Wood spent most of Thursday accepting congratulations for his NASCAR Hall of Fame selection, which comes just a year after his brother and team founder Glen Wood received a similar honor.

“It’s been an awesome couple of days, unbelievable really,” Wood said. “I’m just trying to let it all soak in.”

To him, seeing the Motorcraft/Quick Lane/DAV Ford Fusion turn a fast lap made his day at Charlotte Motor Speedway even more special.

“The car ran really well,” he said. “Charlotte’s always been good for us over the years. We’ve sat on pole 20 times.”

For Eddie Wood, Leonard’s nephew and one of the current co-owners of the team, it was rewarding to see his uncle being recognized for his career accomplishments. Having it happen on Memorial Day weekend, a time in which his team’s car is honoring the Disabled American Veterans, is even more suiting.

It marks the continuation of a relationship between Ford Motor Company and the DAV that began in 1922, when Henry Ford organized a cross-country caravan of 50 Model T Fords to take disabled veterans to their convention in San Francisco.

The use of the No. 21 Ford Fusion to highlight the work of the DAV is part of the “NASCAR Unites - An American Salute” program that begins this weekend at Charlotte and continues through the Coke Zero 400 at Daytona International Speedway on Independence Day Weekend.

“We’re humbled and proud to be a part of honoring those who sacrificed so much for our country,” Wood said.

Eddie Wood pointed out that on a weekend in which military service is being recognized, it’s quite fitting that his uncle Leonard is among those who served their country in the U.S. Army.

The Army was quick to pick up on Wood’s skills, and he spent his time in the service, appropriately, as a mechanic.

“He was racing, then he went into the military, and when he came out of the Army he came right back to the sport,” Wood said.