Wood Brothers to show their true colors at Indianapolis 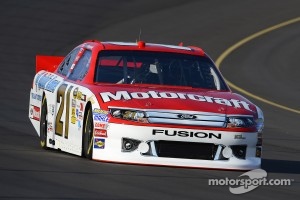 The connection between car and color became so strong over the years, that even long after the team switched to a metal-flake red in 1971, most people still referred to the red color as candy apple. Many people today still refer to the red on the Wood’s Ford Fusion as candy apple.

The moment Trevor Bayne pulls the Motorcraft/Quick Lane Ford Fusion onto the Indianapolis Motor Speedway next week, the Wood Brothers’ car will be sporting the true iconic colors.

The car will be in the throwback colors to honor long-time crew chief and engine builder Leonard Wood and his election into the NASCAR Hall of Fame. Wood’s picture appears on the hood of the car along with the Hall of Fame logo.

Leonard Wood, who still works with the family team, said that every time he walks by the car it catches his eye.

Having him honored at the Brickyard also has special meaning for the man many consider one of the smartest ever to walk through the gate of a NASCAR garage. It was at the 1965 Indianapolis 500 that Wood and his family team worked the pits for Jim Clark and helped deliver Clark and Ford their first win in auto racing’s premier event.

It’s also fitting that the candy apple colors will draw attention to the various candy colors that first appeared on the cars backed by Ford Motor Company midway through the 1963 season. The idea for the paint schemes came directly from Jacque Passino, who at the time, was the director of Ford’s world-wide racing effort.

Eddie Wood, a current co-owner of the team, has been fascinated with the distinct shade of red, which is based on the red caramelized sugar coating found on candied apples, since he first saw it on his family’s race car.

“I was 11 years old then, about the age when I really started noticing a lot of the details about the race cars and how they were painted,” he said. “I remember it well.”

Wood went on to explain that putting a lot of detail and planning into a paint scheme wasn’t nearly as common in those days as it is today.

It wasn’t just the Woods who had colorful cars in ’63. Ned Jarrett’s cars were painted candy blue while Fireball Roberts’ cars were candy lavender. Tiny Lund drove a car painted candy tangerine and Fred Lorenzen’s Holman-Moody Ford was pearl white, another shade in the candy family.

Several drivers, including Hall of Famers Glen Wood and Ned Jarrett, ended their driving careers in cars painted in their respective candy colors.

Wood, a serious student of the history of the sport, has long wondered about the origins of the candy colored paint schemes. To find out, he went straight to the source. He found Passino’s contact information from his mother’s Christmas card list, picked up the phone, and gave him a call. Passino, now 91, answered on the first ring and was ready to talk.

“He said he was having trouble following his cars around the race track because so many of them looked so much alike,” Wood said. “So he had them painted candy colors.”

Passino also told Wood that he worked with famed car customizer George Barris, who had done work for Ford on the paint schemes.

“I was delighted to get to talk to Mr. Passino and get the story from him,” Wood said. “It’s been a mystery to me for a long time.”

The Woods ran that paint scheme until the end of the 1966 season, and then began painting their cars white on the bottom. They kept the candy apple red on top through the driving tenures of Curtis Turner and Cale Yarborough.

In the days before decals and wraps, the Woods painted their numbers white, and the first version of the candy apple car had an orange border around the number. Leonard Wood didn’t particularly like the look of that so the border was changed to black, and around 1964 a gold border was added.

Back in the day, Ophus Agnew applied the candy apple paint to the Woods’ Ford. The latest paint job is the work of Mike “Andretti” Smith.

Eddie Wood, who has done some painting himself in the past, said Smith nailed the paint job, which can be a difficult one.

“You never know how it’s going to come out,” he said. “It can be too dark or too light or have streaks, but it came out just perfect.”