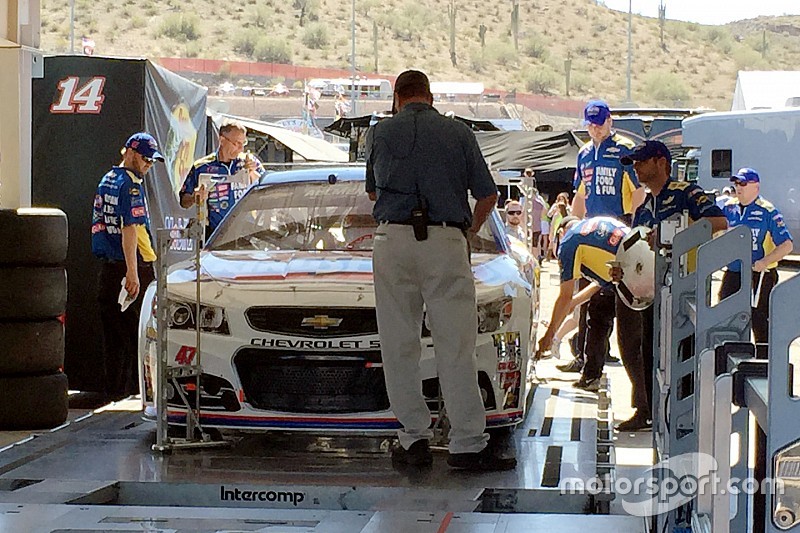 The inability to expedite the inspection process could prove costly for Dale Earnhardt Jr., Kyle Busch and Carl Edwards.

The third time through pre-race inspection was the charm for the No. 88 Hendrick Motorsports team on Sunday. The Nos. 18 and 19 of Joe Gibbs Racing and the No. 98 Phil Parsons Racing ride made two attempts to pass inspection prior to Friday’s qualifying for the Quicken Loans 400.

Any team that fails the pre-qualifying or pre-race inspection process twice is subject to a written warning. A third failed attempt results in a 15-minute loss of practice in the next event. The loss of practice time came to fruition at Phoenix International Raceway in March after teams struggled at Atlanta and Las Vegas to clear inspection in a timely fashion. NASCAR initiated written warnings as part of its Deterrence Policy starting with Richmond in April.

Multiple warnings throughout the course of a weekend or within consecutive events can result in a P1 level penalty which could carry last choice in pit selection, reduced practice time and delay in the order of post-race inspection.

Six or more warning issued to a team over a six-month period could result in a P2 level penalty. At that point, the stakes could raise to the loss of 10 championship driver/owner points, the possibility of a fine ranging from $10,000 to $25,000 and suspension and/or probation.

NASCAR has issued 44 written warnings to Sprint Cup teams since the policy was introduced.

Justin Marks to drive for Front Row Motorsports at Sonoma