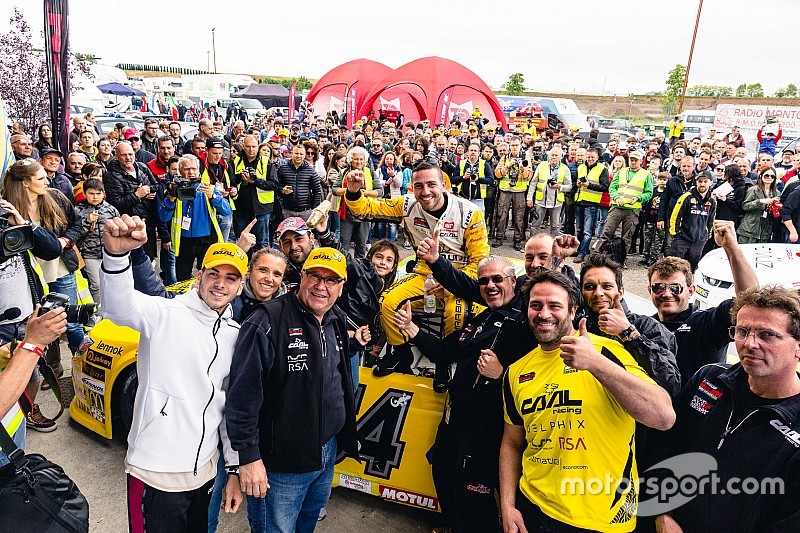 Day made sure that every knows he’s the defending NASCAR Whelen Euro Series champion and he’s prepared to win another title based on his performance this weekend in Italy.

“It was much harder than yesterday because Loris was there the whole time,” said Day. “Luckily Villeneuve was very strong today, so they slowed each other. I saw that battle and I tried to open the gap as much as I could. Hezemans was catching up very fast as soon as he was alone. He would have probably caught me.

“I’m very happy to be in Victory Lane again. I wanted to catch Vilarino in the points standings and I did it.”

Watch the start of the Elite 1 race on Sunday:

While Day - who eventually won by seven seconds - was cruising in the lead Hezemans and Villeneuve put up a spirited battle of second. The two drivers made contact during the race sending body parts of the Hendriks Motorsport Ford Mustang to fly in the air. Hezemans was able to hold on for the runner-up finish.

“I’m happy but also a little disappointed,” said Hezemans, who won the Junior Trophy classification. “The race was a little bit too exciting for me. In the beginning I made a mistake and over-drove the car. I damaged my left side. From then on I was just trying to survive and protect my position from Jacques.”

“With Loris we had a really intense battle,” said Villeneuve, who leaves Italy with two third-place finishes. “My car was really good in the corners. There was too much blocking going on. In the States he would have been in the wall in two corners. Apart from that, the racing was a lot of fun.”

Stienes Longin was fourth with Nicolo Rocca fifth. Ander Vilarino, who won both races in the season opener at Valencia, had to focus on limiting damage in Italy after a contact on Saturday coming home sixth.

After he was forced to retire from the race early on Saturday, Florian Venturi came back the best way possible by dominating to win the Elite 2 division race on Sunday.

The 18-year-old driver led all 24 laps to go on and win by an astounding 15 seconds over Andre Castro.

Watch the start of the Elite 2 race:

“(The win) is very good for the team and myself,” said Venturi. “I wanted to win so badly. I’m so happy to get this win today after yesterday’s setback. Now I’m looking forward to Brands Hatch. I like the British track and I won my first ever NASCAR Whelen Euro Series race over there.”

Castro, who had to retire from the race while leading on Saturday, was also able to rebound with a strong finish.

“We’ve got the same result as we’ve got at Valencia,” said Castro. “My first win is just around the corner and I really want it. Second place is always good for the championship. If we keep getting on the podium and we get rid of the bad luck, we will be in the championship game.”

Lasse Sorensen, who grabbed his first NWES win in his debut on Saturday, finished third by passing Giorgio Maggi on Lap 22 on the 2.5-kilometer track.

“It was a great first weekend,” said Sorensen. “Yesterday’s win was fantastic. I had to take care of the car a little bit in the end but I’m satisfied with the podium in this second race.”

Maggi finished fourth to keep the championship lead after the NASCAR GP Italy over Vittorio Ghirelli, who rounded out the top-five.

NASCAR Roundtable: What to expect in the All-Star race