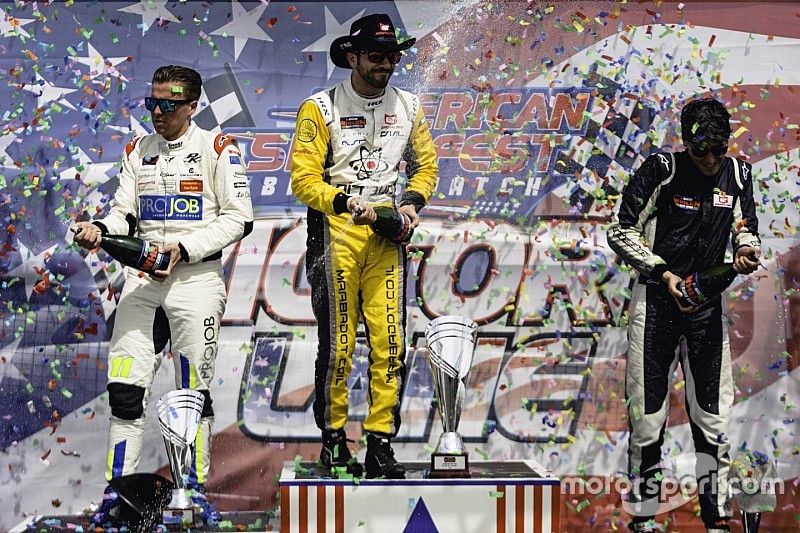 Alon Day stayed hot picking up his third win of the season after making a daring pass by Stienes Longin to win the Whelen Euro Series Elite 1 race Saturday at Brands Hatch.

Day qualified third and remained close throughout the race until he was able to make his move for the lead with just seven laps to go in the race.

“I’m so happy to win again here at Brands Hatch,” said Day, who has now scored three checkered flags at the English track. “I have to be honest, I didn’t expect it (to win). After qualifying I thought Stienes would dominate this one.”

Day started third in the race and was able to pass Loris Hezemans on Lap 10 to move into second where he remained until hei late-race pass for the lead and eventual win.

“I don’t know what happened to Loris, but the battle with Nicolo and Stienes was great,” said Day. “This stuff is normal here at Brands Hatch as it’s hard to overtake here. I was very patient and it paid off.”

Rocca finished third to complete the podium in the first of two days of racing at the historic facility.

“It was a tough battle,” said Longin, who will chase his first ELITE 1 win starting fourth on Sunday. “They fought behind me and I managed to open a gap. Alon was faster and so he passed me. Also Nicolo was very fast, so it was not easy to keep the second position. I’m happy with the second place but I would have loved to win here in front of this spectacular crowd.”

Jacques Villeneuve and Ander Vilarino had issues to their cars during the first ELITE 1 race of the American SpeedFest at Brands Hatch. While the Canadian was able to finish 15th, Vilarino was forced to come to the pits several times. In the end the Spaniard retired early and will start eighth for Round 6.

The ELITE 1 Round 6 at the famous Brands Hatch Indy Circuit on Sunday will be streamed live on Motorsport.tv with the race starting at 8:06 a.m . ET, 2:08 pm CEST..

After starting 26th on the greid Lasse Sorensen proved you can never give up in the Elite 2 division race.

Sorensen staged a furious rally through the field and it paid off after he was able to pass Florian Venturi in the very last lap of the race to capture his second career series win.

In Victory Lane Sorensen was all smiles talking about his improbable victory.

“It was just amazing”, said the Danish rookie. “I would have never thought about it when I was climbing into the car. I would have been happy with a top-10. I was lucky because there were some spins and crashes ahead of me. When you come from 26th you also need a little bit of luck.

“I want to thank my team Dexwet-df1 Racing and my awesome sponsor flexlease.nu. I’m so happy for everyone. It’s going pretty well right now here in the NASCAR Whelen Euro Series.”

Advait Deodhar finished second for his first NWES podium finish while Venturi was able to finish third. Vittorio Ghirelli was fourth and took the ELITE 2 Division points lead and Alessandro Brigatti rounded out the top five.

Points leader Giorgio Maggi had trouble in the race and had to serve a drive-through penalty after the contact with Castro, while the American got the same penalty following a clash in restart with Myatt Snider.