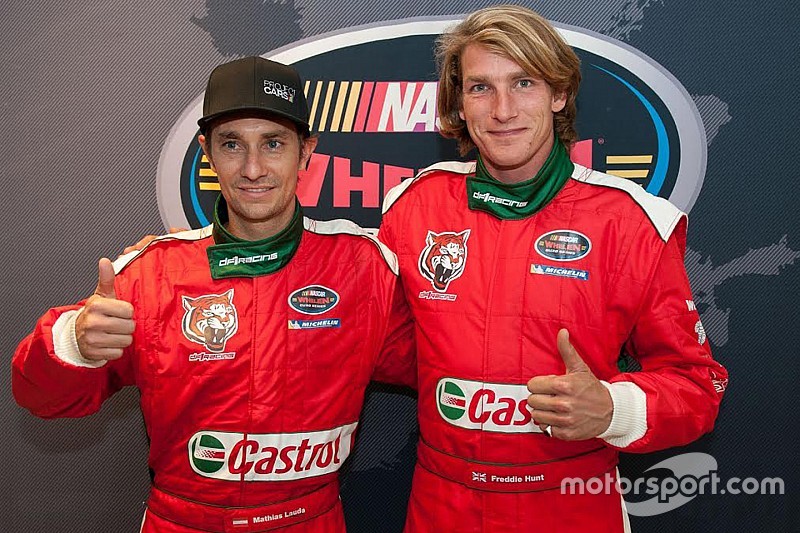 Freddie Hunt says he wants revenge over future teammate Mathias Lauda, as the sons of two former Formula 1 champions gear up to compete in the 2016 NASCAR Whelen Euro Series.

The rivalry between James Hunt and Niki Lauda is among the most famous in motorsport history, their legendary battle for the 1976 F1 title doing much to boost the popularity of Grand Prix racing.

More recently, the blockbuster movie Rush introduced the legend of the Hunt-Lauda rivalry to a whole new generation, while their legacy lives on through their sons Freddie and Mathias - both racers in their own right.

But now, 40 years on from their fathers' epic dice, the duo will become teammates as they both drive for the DF1 Racing team next year.

“When I told Mathias about the idea of having Freddie in the team, he immediately was all for it,” DF1 team principal Norbert Walchhofer told Motorsport.com.

“They know each other very well and they get along very well, too.”

“Freddie paid a visit to the 2015 NASCAR Euro season finale at Zolder and Mathias introduced him to the car and showed him around.

"Freddie also had a seat-fitting on the spot. He really would have liked to go racing that weekend.”

A few weeks later, Hunt got a test in the Euro NASCAR. “And he was fast from the word go,” Walchhofer recalls fondly.

“I do get along with it pretty well,” Hunt said after nicknaming his car 'The Beast'. “The brakes are a bit tricky, but my lap times were not too bad."

Last time the duo shared the track during last year's MRF Challenge series, it was Lauda who proved the more competitive, even standing on the top step of the podium in Bahrain.

Nonetheless, Hunt says he will treat his first season as a learning year. “I want to find out where my strengths and weaknesses are. And I want to stay out of trouble.”

Walchhofer also said that the whole season will be closely followed by a camera crew as they prepare a documentary about Hunt and Lauda, called Sons of Speed.

“This movie is not only about motor racing,” Walchhofer said. “We want to show how the sons of racing legends live and what they are up to.”