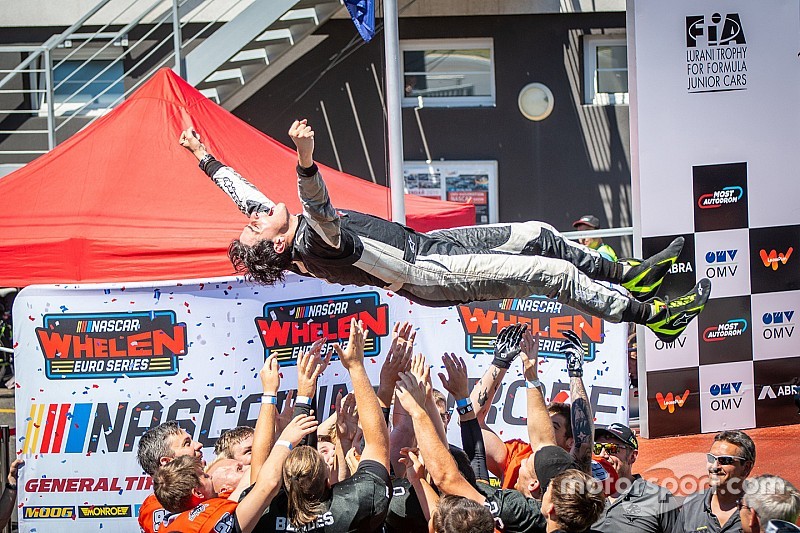 Nicolo Rocca returns to Victory Lane for the first time since 2015 after Loris Hezeman loses motor with four laps to go in the race.

The inaugural NASCAR Whelen Euro Series race at Autodrom Most in the Czech Republic proved to be a memorable one for Nicolo Rocca.

After Loris Hezemans’ engine blew up with four laps to go. Nicolo Rocca inherited the lead and went on to grab his fourth NWES career win – the first of the 2019 season – when the race ended under caution due to the oil left on track by Hezeman’s No. 50 Mustang.

Rocca started from pole position but lost the lead to Hezemans in Turn One. The Dutch driver built a comfortable lead and appeared to be on the way to an easy win before his mechanical issue with the motor ended his chance for a win.

Rocca, who was running second at the time, took over the lead and won the race under caution. The PK Carsport driver also won the Junior Trophy classification. The Italian went back to Victory Lane 1,386 days after his 2015 round win at Magione, Italy.

“It feels so good to be back in Victory Lane,” said Rocca, who posted the fastest lap of the race. “First of all, I’m very sorry for Loris. It was a tough race, we both pushed so hard. It’s a shame that he had to retire early. I could have caught him and then we would have had a nice fight. I will start from pole position tomorrow. Right now, I’m just really happy.”

While Rocca was celebrating the win, Hezeman’s was feeling the agony of having a win go away late in the race.

“I’m really disappointed, because the car felt great the whole race,” said Hezemans. “There were no signs of an engine failure. I came down the straight, hit the brake and shifted normally to third but the engine blew up. We were just unlucky. I hope the guys can fix it, as Giorgio deserves to defend his ELITE 2 championship lead.”

Both Longin and Rocca dramatically closed the points gap in the ELITE 1 standing from Alon Day, who now leads by just one point on Longin and nine points on Rocca. After a less than ideal start, Day made contact with Jacques Villeneuve – the Canadian also had to bring his Go Fas Racing Chevrolet Camaro to an early stop – and suffered a tire puncture. Day was penalized for an avoidable collision with the former Formula One champion.

Lucas Lasserre put up a strong performance from sixth on the grid and finished fourth ahead of Sebastiaan Bleekemolen.

Henri Tuomaala, who ended up eighth under the checkered flag, won the Challenger Trophy ahead of Eric De Doncker and Mauro Trione.

Hendriks Motorsport made it a total team effort in helping Giorgio Maggi grab the win in the ELITE 2 Round 7 at the Autodrom Most.

After his teammate Hezeman’s lost a motor in the Elite 1 race, the team had to install a new engine in less than two hours before the start of the race on Saturday.

Dutch team put a brand new engine in the car just in time for Maggi to make it to the grid. From there Hendriks repaid his team’s hard work with an authoritative drive around the 4.222 kilometers of the Autodrom Most.

After starting from the pole, Maggi had to defend the lead against Lasse Soerensen and mastered a restart with seven laps to go on the way to his second NWES win. In the process he also stretched his championship lead in the ELITE 2 Division to 14 points on Vittorio Ghirelli.

“After the disaster with Loris [Hezemans] the guys put the new engine in the car in a very short time,” said the race winner. “It was just a miracle but this is why I love those Hendriks Motorsport guys. Nobody asked the question: ‘Can we make it?’ They just did it and we won, I’m so happy. They are very professional and the whole team did an amazing job.”

Soerensen tried his best in the closing laps to catch the leader, but had to settle for second, continuing his impressive streak of five consecutive podium finishes since joining NWES.

“It’s always great to be on the podium but first of all I want to win races,” said Soerensen, who is focusing on the ELITE 2 championship race. “When it’s not possible to win, the second place is the next best thing to achieve. We had some problems in qualifying, but we found the pace in the race. I’m super happy for the whole team.”

Andre Castro, who sat eighth in points before the race, moved up to sixth in the ELITE 2 championship by securing his third NWES podium finish in the 2019 season. The American beat Advait Deodhar to the line for third with Justin Kunz rounding out the top-five.

Loris Hezemans rebounds from problems to win at Autodrom Most