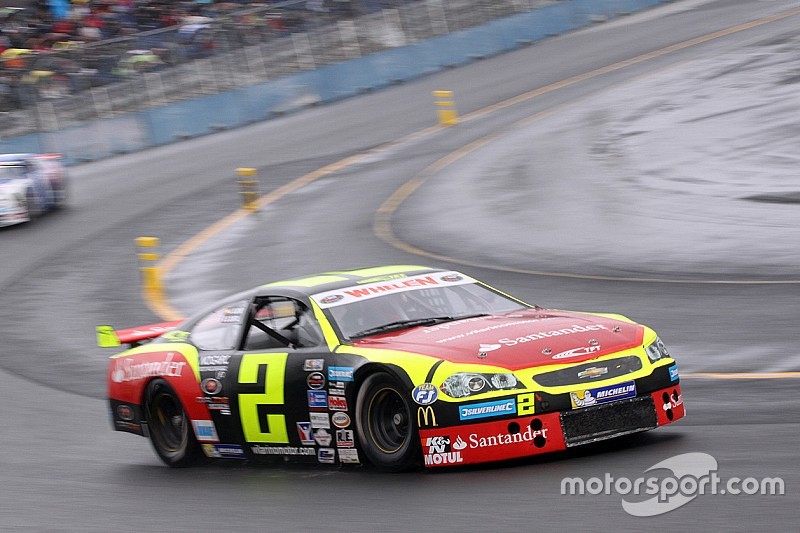 Daytona Beach, FLA - After a heartbreaking loss by one single point in 2014, Ander Vilarino came straight back to the top of the NASCAR Whelen Euro Series to become a three-time European NASCAR Champion with 3 wins, 9 top fives and 12 top tens at the end of a season that proved to be exciting and incredibly demanding for all the contenders.

“I’m happy, really happy. It feels great to be able to celebrate again with my wife, my children and my team. This title is the best of the three for me, especially because of the way we lost last year, by such a little margin and with some bad luck during the season. To lose that way is difficult to accept,” said Vilarino. “The most important thing to me was to win the championship back and this season has been psychologically exhausting but very exciting, especially for the fierce battle between a group of expert drivers like me, Anthony Kumpen, Frederic Gabillon, my teammate Romain Iannetta, Bert Longin and some young talents like Eddie Cheever III, Nicolò Rocca and Alon Day.”

Family always played a fundamental role in the Vilarino’s career and even more this time, with all the energies and the focus needed to regain the title.

With double points in the last four races, you cannot make any mistake.

“All my family always supported me. My wife Irune is definitely the most important person for me. She understands what racing means, how much you have to train and all the mental strength it takes, and having her and our children with me was really special. I hope they will remember these moments as fondly as I remember being with my father when he was racing.”

Looking only at the 35-point margin Vilarino ended up with on second-placed Rookie Of The Year Alon Day – the widest in the Spaniard’s career – 2015 may appear to have been an easy task, but it was everything but easy until the final race of the season, as six different drivers won at least once and the Hondarribia-native had to face a plethora of rivals along the way. What Vilarino appreciated most though, was the fairness of this “battle of generations” and the mutual respect between all the drivers involved.

“It was a season to remember for the on-track battles. All the contenders were very fast, my teammate did an outstanding job too, but at the same time we were all very respectful and I can honestly say that winning a title against these drivers makes it even more special.”

Vilarino started strong with a win in the opening weekend in Valencia that granted him an early points lead. The Spaniard kept posting strong results, proving to be the most consistent driver in the field and adding more records to his already exceptional resume.

He won again, for the fifth time and for the fourth consecutive year, at Brands Hatch and for the second time at the Tours Speedway, bringing his career total up to 20 – Vilarino is the all-time NWES winningest driver – and entering the playoffs with 29 points on Cheever.

“All this stats are great, but what matters most is to be competitive. The numbers we put up mean that we’re fast and we can compete for the win in each race and that’s what you want to know when the season starts,” continued Vilarino. “I don’t think about the numbers very much, but there are tracks I really love to win on, like Valencia, where I won the most races in my career in many different cars, and Brands Hatch, which hosts what I think is the best event in the NASCAR Whelen Euro Series calendar, an amazing weekend.”

It was in the Italian Semi Finals that Vilarino lived the most difficult moment of his season. As Nicolò Rocca emerged as his main rival for the title, Vilarino went off the damp track at the second corner, jeopardizing his chances, but he was able to rejoin and finish fifth, preserving his lead. Less than one month later in Zolder, he sneaked past a spectacular crash on Saturday, while Rocca had to retire, handing him an easier race on Sunday, with some time to think about the third ring.

“With double points in the last four races, you cannot make any mistake. We were fast, consistent, strong all season long, but also a little lucky. The luck we didn’t have in the 2014, we got it back in 2015,” concluded Vilarino, who is now a veteran of the end-of-the-season celebrations and is savoring his third title before focusing on the next season. “It will be a huge honor to have my car in the NASCAR Hall Of Fame and my name in the Whelen Hall Of Champions once again. For sure I’ll try to win the kart race and I have a couple of funny stories I’m keeping for my speech at banquet. We’ll have fun!”