• Busch led a race-high 57 laps (of 100) in his first NCWTS start since 2001. Other Tundras leading laps in today’s race included Kligerman (two) and Todd Bodine (four).

• Peters continues to hold the NCWTS point lead following Michigan, but is in a tie with Ty Dillon. 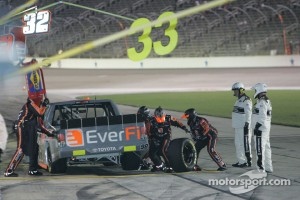 How did the fuel mileage work out in today’s race? “Really worked out with good strategy there. We were having problems in the pits today. I did mess up and then the guys kind of messed up a little bit, but to come back and get that good finish it was awesome. We were actually about three laps short there and we kind of fell back a little bit and were losing the draft, so we kind of decided to go into conservative mode. So, I have to thank my fellow competitors for not throwing out a yellow there. I don’t know how there wasn’t more cautions with this kind of crazy racing, but a lot of fun here at Michigan. Glad that we could get the No. 98 EverFi Toyota up front.”

How was your Tundra in today’s race? “I think we had a pretty decent truck -- it was just the way this racing went. It was definitely just kind of unique. We started to make a move up there and I think we were up to ninth and then we had to come in and pit. I knew we were fast enough to stay up there, but it was a good strategy to pit early. I really didn’t think it was going to go green all that way, so I have to thank all the other guys for not wrecking, especially even more cautions for how crazy of racing that was. Good job there -- we were actually short, but somehow we were able to make it there just by the little bit we saved. I have to thank Toyota for good fuel mileage and good power.”

What does this top-three finish mean to you? “It means a lot to this whole team -- we really needed this. I feel like we’ve been making steps in the right direction ever since Iowa and we’ve been getting closer and closer to just getting more consistent with better finishes. Really glad the guys were able to get this -- it’s good for everyone. We didn’t have a great day in the pits either, but still to come away with a good finish will leave everyone with high hopes going to Bristol.”


Did you think you won the race? “Yeah, I thought passing the 31 (James Buescher) there -- no one had told me there was fuel mileage racing going on -- so when we passed the 31 off four I was like, ‘Last lap pass for the win? This is awesome. Woo,’ but then we didn’t win. We were fourth, but it’s a great start for this number 7 Red Horse team. Thank you to Toyota, TRD (Toyota Racing Development), Tom DeLoach (team owner) and everyone that has made this possible -- all the people that have got me to this point in my career. You know, I look at this run right here and say that this is a team that can go win this championship and I’m just thankful for the opportunity and I just can’t thank my teammates enough also for the work they put in practice to get this truck as fast as it could be.”

Does this speak to the work put in by Red Horse in the last two weeks? “Yeah, absolutely. We just worked hard and I can’t think this whole team enough for the effort they put in over the last two weeks to get these trucks together and all these things and all it took to get here -- Toyota and Tom DeLoach and the opportunity they’ve given me and all our supporters out there. It’s just awesome. This number 7 Red Horse Toyota Tundra was just awesome. I thought we won there off of four because I was like, ‘I got the 31 (James Buescher).’ No one had told me we were doing fuel mileage. I was like, ‘Woo!’ We didn’t win, so we finished fourth, but it’s a good start and we can go contend for this championship and win this thing.”