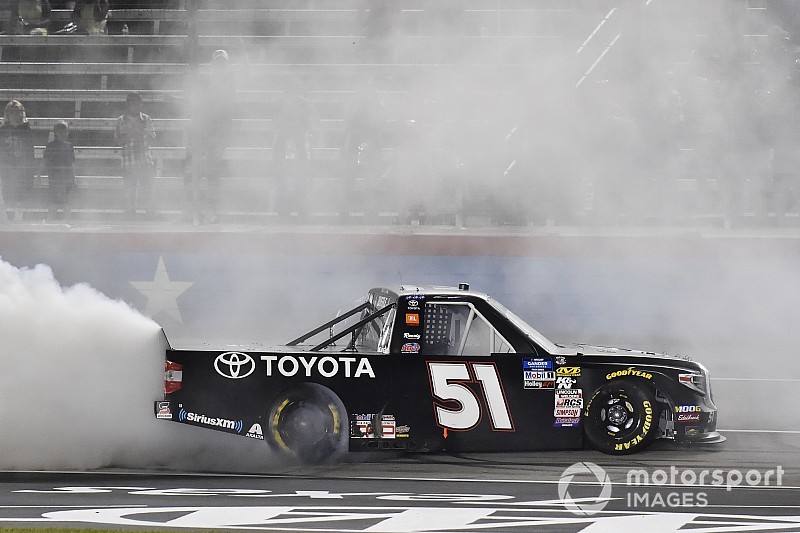 Greg Biffle’s comeback to the NASCAR Gander Outdoors Truck Series with Kyle Busch Motorsports ended in perfect fashion as he survived a wreck-fest at Texas Motor Speedway to score his first Truck win since Phoenix in 2001.

Eleven laps in, the first caution came out for Tyler Ankrum’s Toyota striking the Turn 1 wall, and Gus Dean’s Chevy spinning onto the back straight.

The Lap 17 restart saw Enfinger easily hold off his pursuers, with Gilliland, Sauter and fast restarting Ross Chastain in the Niece Equipment Chevy running ahead of Biffle and Austin Hill’s Toyota in hot pursuit. Sauter and Chastain deposed Gilliland just before the fun was put on hold again, as Kyle Benjamin struck the wall and brought out the second caution. He went straight back to the paddock.

The Lap 25 restart saw Enfinger escape again as Chastain and Sauter dueled over second but soon Codie Rohrbaugh was into the inside wall on the exit of Turn 2 and out came the third caution.

Both Biffle and Gilliland chose the opportunity to pit, while Enfinger, Chastain, Sauter and Matt Crafton stayed out. Again, there were only a couple of laps before Angela Ruch struck the wall at Turn 2. The yellow became a red while Ruch’s car was dragged away by a wrecker.

A three-lap shootout saw Sauter steal the lead from Enfinger who also lost second to Hill, with Chastain in fourth ahead of Crafton and Gilliland.

The restart saw Gilliland stay out ahead of Jordan Anderson, Ben Rhodes and Tyler Ankrum who had spent so much time on pitlane in Stage 1, while Enfinger, Sauter, Crafton, Creed and Hill had pitted and were having to climb up from outside the top dozen.

Rhodes moved past Anderson into second on Lap 51 and started haunting leader Gilliland, but the yellow flew on Lap 56 for Sauter who had been nudged up the track and into the wall at Turn 4 by Hill who had gotten loose and washed up from the inside line. He too brushed the wall and pitted under caution for a checkover.

The restart barely got going before Corey Roper spun his truck but kept it off the wall but still brought out the sixth caution, at which point Anderson and Creed pitted.

The next restart saw the lineup as Gilliland leading Rhodes, Ankrum, Moffitt, Biffle, Stewart Friesen, Enfinger, Crafton, Chastain and Brennan Poole as the Top 10, ahead of Harrison Burton. However, Gilliland slipped back at the green flag and he spun and backed into the wall, as Austin Wayne Self simultaneously spun down into the inside wall. Out came the caution for the seventh time.

Rhodes would lead Ankrum, Moffitt, Friesen, Biffle, Crafton and Enfinger to the green, although Ankrum would spin off Turn 4 and down pitlane next time by without making contact with a wall, and the same was true with Anderson, so the race stayed green to the end of the 40-lap stage. Rhodes ended the stage ahead of Friesen, Burton, Enfinger, Poole, Biffle, Chastain, Crafton, Tyler Dippel and Creed.

With most but not all of the fast trucks pitting, Creed led Dippel, Rhodes, Roper, Self, Biffle, Friesen, Anthony Alfredo, Enfinger, Chastain, Moffitt, Crafton and Hill. Creed slid sideways up the track and hit Dippel, leaving Rhodes ahead of Biffle, Enfinger, Friesen, Crafton, Alfredo, Roper, Creed, Chastain and Hill.

However at the restart Rhodes didn’t get going – jammed in fourth gear – and pulled out of line to avoid causing a pile-up. The pile-up came less than a lap later, as Natalie Decker spun, Spencer Boyd spun in avoidance and Trey Hutchens III struck Boyd’s stationary truck. That brought out the 11th caution.

Enfinger and Biffle were leading the restart Alfredo and Friesen side by side behind them, but it was Biffle that emerged in front – the first time he had led a Truck race since 2001.

His joy was short-lived, as out came the 12th caution when Friesen slid up into the wall and had to pit for repairs.

Hill led Alfredo, Moffitt, Chastain, Enfinger and Creed as Biffle fell back to avoid a three-wide situation that threatened to turn bad. Chastain moved past Moffitt into third on Lap 119. Moffitt would have to pit seven laps later with left-side damage.

By the time Chastain deposed Creed to grab second, Hill was over three seconds up the road and that became five seconds as the leader was defter through traffic.

Alfredo stopped on Lap 137 but it was a bad stop as he stopped long and then pulled away before the refueler had finished.

Chastain pulled in from second place but the four-tire stop took a long time and he fell a lap down.

Self’s Truck stopped on track at Lap 152, causing the 13th and final caution in this 167 lap race.

Following pit stops, Biffle was up front ahead of Roper, Crafton, Ankrum, Burton, Creed, Enfinger, Poole, Hill and Moffitt. Crafton made short work of Roper and moved onto the rear bumper of Biffle who had last stopped on Lap 109. Alfredo had a spin but kept going and so the track stayed green.

With three laps to go, Crafton pushed up the track and couldn’t regain the ground he lost to leader Biffle who went on to win.

Ankrum took third, ahead of Enfinger, Burton and Creed.