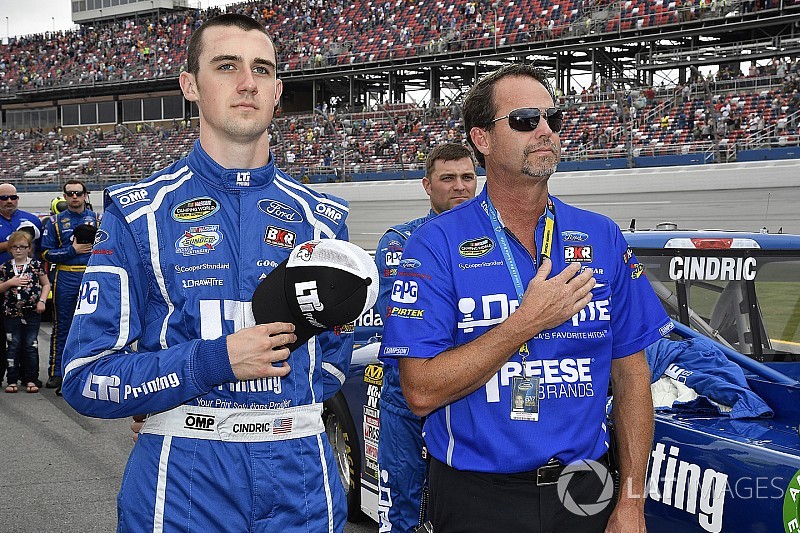 A veteran crew chief is proud of the improvement of his rookie driver and dedication of his crew as they advance to the Round of 6 in the NASCAR Camping World Truck Series playoffs.

Doug Randolph and the Brad Keselowski Racing crew that field the No. 19 Fitzgerald Glider Kits Ford F-150 have kept working hard and rookie Austin Cindric has kept improving behind the wheel as they pursue the team’s first championship.

After winning the NASCAR Truck race at Canadian Tire Motorsport Park to qualify for the postseason, the team has scored three consecutive finishes of eighth or better – highlighted by a fourth and a fifth-place finish – to advance to the Round of Six.

Despite knowing the team will cease operations at the end of the season, Randolph said without this team and their dedication, they wouldn’t be going to Martinsville Speedway on Saturday with an opportunity to win a title.

“I’m really excited that this team has made it this far,” said Randolph. “We’ve kind of flown under the radar to make it to the second round. We’re sixth now (in the standings) and we want to make it to Homestead.”

Cindric has shown steady improvement throughout the season and Randolph hopes that trend will continue this weekend in Martinsville.

“It took us a little time to figure out Austin’s strength and weaknesses and figure out how to apply them to help his performance on the track,” said Randolph. “We’ve definitely seen improvement throughout the season with Austin. We’re all getting better and better every weekend.”

After finishing his first three races of the season 21st or worse, Cindric and his team have went on to finish in the top-10 in 12 of the next 16 races on the schedule, and he has scored two consecutive top-five finishes heading into the final short track race of the season.

“I couldn’t be more proud of my guys and the dedication they have to this team and helping us stay in the championship race,” said Randolph. “They’re trying to find jobs for next year and keep working on hard to put out a good product here (at Brad Keselowski Racing).”

The Cindric-Randolph duo hope to rebound from a 21st-place at Martinsville this past April.

“The spring race there was probably one of our worst of the season,” added Randolph. “Hopefully, as we improved this season, we’ll show that improvement this weekend at Martinsville. These next three races are crucial for us.”

While Randolph is quick to thank his team, he also wants to thank others who have helped make this championship run possible.

“I want to thank all the family members who have helped our team by being so supportive,” said Randolph. “Not only have my guys kept working hard, but they’re also getting great support from home as well so they can keep working hard and stay focused on our goal. We came in as a team and we’re determined to go out as a team.”

It's Burton vs. Burton in this weekend's Martinsville Truck race