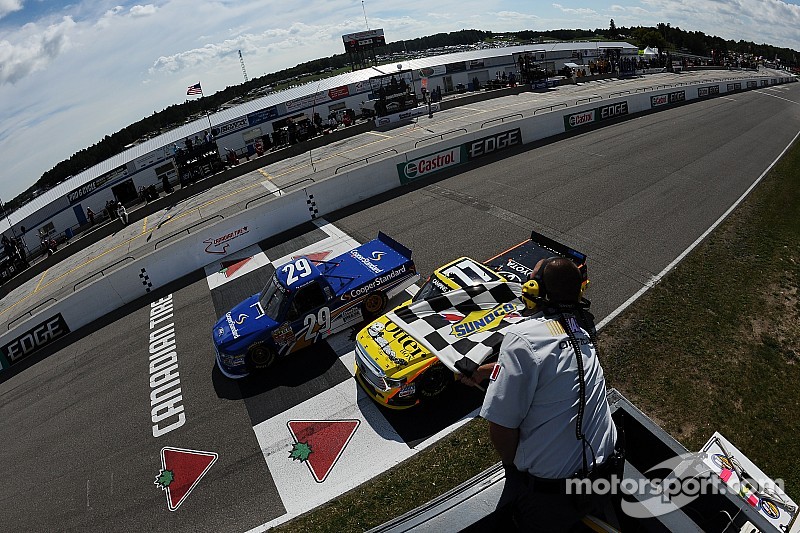 The 64 lap race was decided by the matter of a few feet.

The battle for the win in the Chevrolet Silverado 250 at Canadian Tire Motorsport Park came down to a duel between a Toyota and a Ford.

The No. 29 Brad Keselowski Racing Ford of Ryan Blaney and the No. 77 Red Horse Racing Toyota of German Quiroga fought tooth and nail for the victory. In the end, Blaney claimed his third-career Truck Series win, edging Quiroga by just 0.49 hundredths.

The final seven laps were nervewracking

"It's so cool, because it's so unique," Blaney said. "It's such a unique place."

"We all wish we could be doing burnouts on the front stretch, but you can't win them all," Jones said.

Blaney's BKR team planned a one stop stratgey, while everyone else implemented a two-stop plan for the 64-lap race. After most of the field cycled through initial pit stops by lap 17, Blaney took the lead. Blaney gave up the top spot to head down pit road for the first time on lap 30, handing the lead over to Quiroga.

The No. 00 Haas Racing Development Chevrolet of Cole Custer took over soon after, but also gave up the position to make his second and final pit stop of the race. Eventually, everyone but Blaney pitted again, and with 20 laps to go, Blaney was cycled back to the point.

Cautions were far and few between

The first yellow flag of the race waved on lap 46 for the stalled No. 08 SWM-NEMCO Toyota of John Hunter Nemechek. One more caution came out late in the race for the No. 19 Brad Keselowski Ford of Alex Tagliani, who stalled after going for a spin.

I was trying hard to make him make a mistake

We then enjoyed an eight-lap run to the finish. Quiroga restarted second to Blaney for both restarts, and both times, Blaney was able to maintain his lead.

The scramble at the finish

In the closing laps, Quiroga was able to pull up beside Blaney multiple times, but was unable to take the lead until the final lap. Quiroga got alongside on the long backstretch and held on the outside of Blaney through turn eight. Blaney crossed back under out of the final corner and the pair drag raced to the line, with the No. 29 prevailing by about 3/4th of a truck.

"I knew he had less fuel and older tires. I was trying hard to make him make a mistake," Quiroga said. "He just got a really good run off of turn nine."

The No. 20 NTS Motorsports Chevrolet of Gray Gaulding finished fourth, and the No. 54 Kyle Busch Motorsports Toyota of Darrell Wallace Jr. rounded out the top-five.

"This whole weekend's been a lot of fun," Gaulding said. "We needed this. We've had some bad luck on the trucks side."

Tagliani takes the pole for Chevrolet Silverado 250 in Canada