Starting the feature from 21st position, Bloomquist's Toyota remained on the loose side in the early stages and by lap 20 of the first segment he had subsided to the 30th spot.

Dirt Late Model Hall of Famer Scott Bloomquist, a nine-time winner in crown-jewel events at Eldora Speedway in Rossburg, Ohio, made his NASCAR debut at the famed half-mile clay oval in Wednesday night's Inaugural Mudsummer Classic. After dialing in his No. 51 ToyotaCare Tundra during two practice sessions Tuesday and one Wednesday, finishing inside the top 10 in two of the three, Bloomquist and crew felt that they had a very competitive truck for Wednesday's 150-lap event. 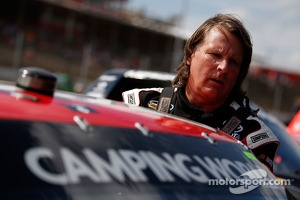 After battling a loose-handling Tundra in qualifying, the 49-year-old rookie started at the rear of his heat race and as the truck remained extremely loose was unable to advance during the eight-lap sprint to determine the starting order for the historic race. Starting the feature from 21st position, Bloomquist's Toyota remained on the loose side in the early stages and by lap 20 of the first segment he had subsided to the 30th spot. His troubles compounded when just before the end of the first segment he went a lap down to leader Kyle Larson, who was setting a blistering pace. By the time the historic night was all said and done and all three segments had been completed, the No. 51 team ended NASCAR's first dirt race in over 40 years two laps down in the 25th position.

"We just fired off loose in the beginning of the race, got stuck in the bottom line and fell backwards," Bloomquist said. "After that the truck was better, but the track didn't widen out and it was hard to make up any ground."

The No. 51 ToyotaCare Racing team held onto the second position in the owner's championship standings. The team now sits 46 points behind the series-leading No. 88 team with 10 of 22 races completed. Chad Hackenbracht will make his second start of the season in the No. 51 Toyota when the series resumes action on August 3 in the Pocono Mountains 125 at Pocono (Pa.) Raceway.