The NASCAR Camping World Truck Series returns to the high banks of Bristol Motor Speedway this Wednesday for what is almost certain to be 200 laps of exciting, on the edge racing.

Two-time series champion and NASCAR veteran Todd Bodine is prepared for competition with his No. 11 Toyota Care Tundra, carrying several years of experience and success with him to the half-mile oval. 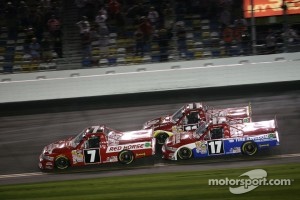 Bodine enters Bristol with three runner-up finishes in the NASCAR Camping World Truck Series (NCWTS) to his credit, as well as a third place finish in 2011. Though he hasn't visited victory lane in truck series competition, he has claimed two victories, along with seven top-five and 10 top-10 finishes in the NASCAR Nationwide Series.

With an impressive resume at the stadium-like track, Bodine is ready to compete on the Tennessee track in front of the remarkable crowd of fans Bristol offers up each year.

"Bristol is just plain fun," Bodine said. "The atmosphere there is always great and the fans are some of the best we see all year. You never know what's going to happen because everything comes at you so quickly. It's important to keep your truck clean and have the right track position so you can try to stay out of the way of mistakes other drivers make."

Prior to making the trip to Michigan International Speedway last weekend, Bodine and his wife, Janet, visited the University of Notre Dame in South Bend, Indiana. Avid Fighting Irish football fans, the Bodine's visited with the football coaching staff and sat in on pre-season practice. Todd will also help support Kelly Cares Foundation at one of its fundraising events later this year.