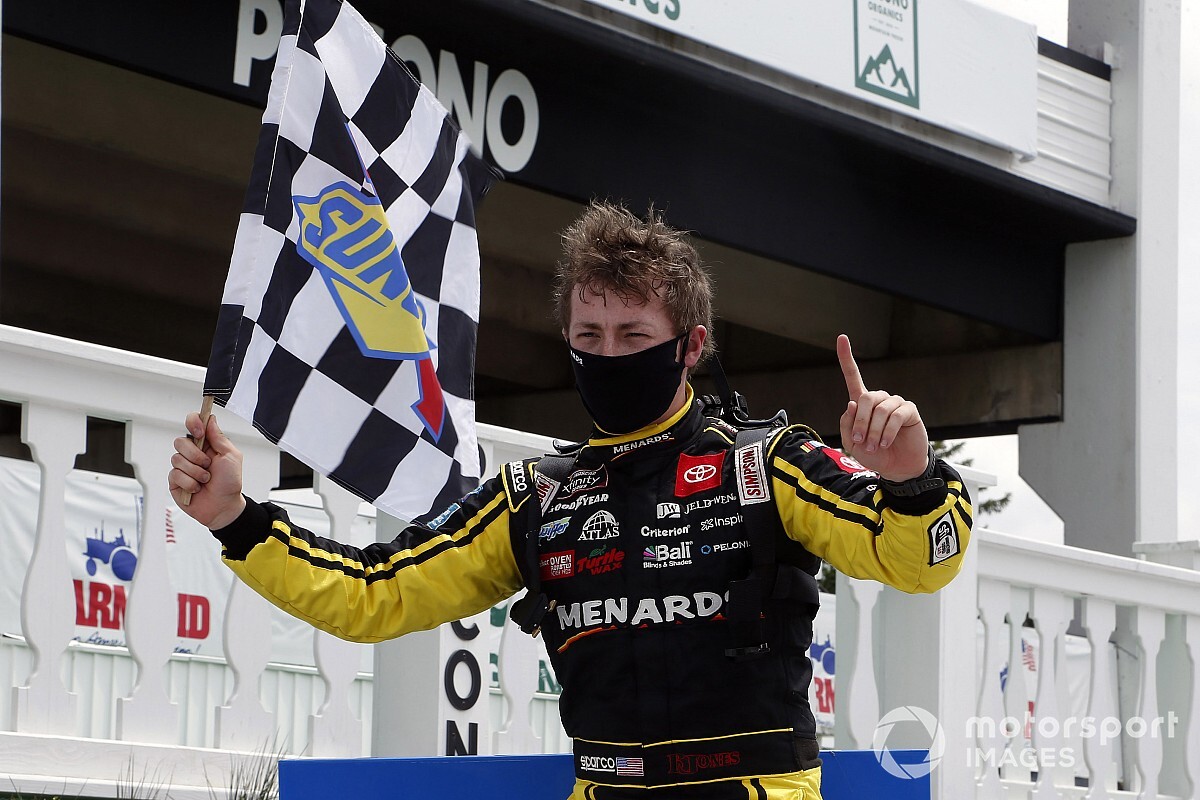 On a restart with two of 60 laps remaining, Creed used a daring three-wide move to grab the lead from Jones only to see Jones patiently run him down one lap later to win Saturday’s rain-delayed race at Pocono Raceway.

Jones, 23, has a pair of victories in the Xfinity Series but until Saturday he had not been able to seal the deal in the Truck Series.

“First off, I want to thank everyone who makes it possible for me to come and play in the Truck Series. When I first started racing, I saw the No. 51 Late Model and said I want to be with Kyle Busch Motorsports one day and win races,” Jones said.

“We finally did it. We’ve come close in the past. That was a heck of a battle. It was fun for me there. Got a heck of a push from (Todd Gilliland). All in all a great day – I’m pretty pumped.”

On a restart with 22 laps to go, Zane Smith powered into the lead around Derek Kraus. Before the completion of the lap, Christian Eckes and went to the inside of Smith to grab the lead.

With 20 laps remaining in the race, Eckes led the way followed by Jones, Hill, Gilliland and Rhodes.

On Lap 50, Eckes appeared to blow a tire in Turn 2, spun and slammed into the wall bringing the opportunity for his first series victory to a crashing halt.

Jones, who was running second, inherited the lead as the race was placed under caution. On the restart on Lap 53, Jones was followed by Hill, Creed, Gilliland and Rhodes.

Hill got around Jones in Turn 2 on the restart to grab the lead only to see Jones retake it entering Turn 1 on the following lap.

Tim Viens spun out on Lap 55 in Turn 1 to bring out another caution and bunch the field together as the race inched toward its conclusion.

On the restart with two to go, Jones led the way followed by Hill, Creed, Gilliland and Stewart Friesen.

A late caution locked Creed into the Stage 2 win, his first stage victory of the 2020 season.

Following the break between Stages 1 and 2, several cars pit but Creed remained on the track and in the lead when the race returned to green on Lap 20.

On Lap 22, Brennan Poole hit the wall in Turn 3 to once again bring out a caution. The race returned to green on Lap 27.

Several teams pit under green after the restart so they could stay out during the next stage break.

Jordan Anderson spun in Turn 1 on Lap 28 which brought out a caution and effectively ended Stage 1.

Creed and Hill went back-and-forth during a one-lap shootout to the finish with Creed finally coming away with the Stage 1 win.

After Hill, Tyler Ankrum was third, Jones fourth and Gilliland rounded out the top-five.

Johnny Sauter started on the pole thanks to a random draw but before he could complete a lap, Matt Crafton and Codie Rohrbaugh wrecked in Turn 1 to bring out the first caution.

Creed led the way on the restart on Lap 6 followed by Hill and Sauter.

On Lap 7, Austin Wayne Self and Raphael Lessard got together in Turn 3 to bring out another caution. The race restarted on Lap 10 following a brief red flag to clean the track of debris.

Ty Majeski got turned around in Turn 1 on Lap 12 which brought out another caution, and another red flag to clean the track. The race returned to green on Lap 15 with Creed in the lead.