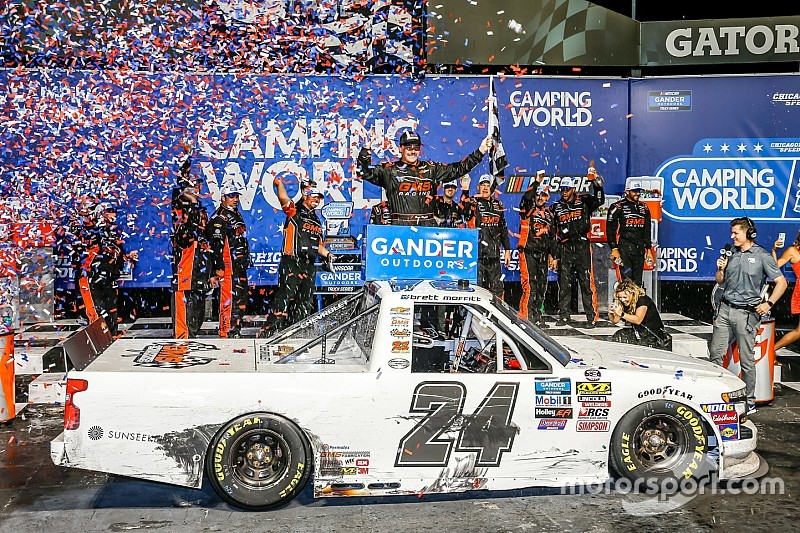 Brett Moffitt got this win the old fashioned way – he finished first.

Moffitt held off Brandon Jones to win Friday night’s Camping World 225 at Chicagoland Speedway – his second Gander Outdoors NASCAR Truck Series win of the season but the first by being the first driver to take the checkered flag.

Moffitt picked up his first win of 2019 two weeks ago at Iowa even though he didn’t lead a single lap but race-winner Ross Chastain was disqualified, awarding the victory to the runner-up Moffitt.

“Man, we had a really good Chevy Silverado. Everyone at GMS Racing gave us a really truck,” Moffitt said after the race. “We didn’t find a sponsor (for this race) and it’s a shame but hopefully it will bring some awareness to our situation.

“I have to thank the Gallagher family, Maury and Spencer, for giving me this opportunity and with everyone on this this No. 24 team and the hard work they put in. It’s been a rough start to the year but hopefully we’re getting it rolling now.”

The win is the ninth of Moffitt’s career and second consecutive at Chicagoland for the reigning series champion.

Stewart Friesen ended up third, Harrison Burton was fourth and Austin Hill rounded out the top-five.

With 50 of 150 laps remaining in the race, Moffitt maintained a small lead over Friesen with Jones up to third. Hill was fourth and Burton fifth.

With 40 to go, the top three – Moffitt, Friesen and Jones – were separated by less than half a second and everyone still had to make one more pit stop to make it to the finish on fuel.

A final round of green-flag pit stops began with 32 laps to go as Tyler Ankrum, Crafton and Chastain were among the first to drop down to pit road.

Once the cycle was completed on Lap 125, Moffitt held a more than 2-second lead over Jones. Friesen was third, Burton fourth and Hill fifth.

With less than 10 laps to go, Moffitt had stretched his lead over Jones to more than 3 seconds.

Grant Enfinger held off a late charge from Jones this time to hang on to the Stage 2 victory. It was his fourth stage win of the season.

Moffitt ended up third, Burton fourth and Hill rounded out the top-five.

Following the break between Stages 1 and 2, all of the lead-lap trucks elected to pit with Jones the first off pit road. On the restart on Lap 43, Jones was followed by Enfinger and Matt Crafton.

On Lap 44, Natalie Decker spun off Turn 4 after contact with Todd Gilliland to bring out another caution. The race returned to green on Lap 48 with Jones still in the lead.

With 23 laps remaining in the stage, Enfinger got back around Jones to reclaim the lead as Burton moved up to third.

With five laps to go in the stage, Enfinger remained ahead of Jones as Moffitt moved up to the third position.

Jones got around Enfinger off Turn 4 of the final lap to claim the Stage 1 victory.

“We started off with good balance. I tried to conserve as much as I could, but he was just too good at the end,” Enfinger said of Jones.

Moffitt ended up third, Hill fourth and Ankrum rounded out the top-five.

Just after the race went green, smoke poured out of Ben Rhodes’ No. 99 Ford and he had to pull onto pit road. He eventually went to the garage with engine issues.

On Lap 5, Jordan Anderson spun off Turn 4 to bring out the first caution. The race returned to green on Lap 10 with pole-winner Hill still out front.

Enfinger finally got around Hill for the lead for good on Lap 12 as Jones moved up to second.

With 20 laps remaining in the first stage, Enfinger continued to lead the way followed by Jones and Hill.

After 20 laps, Enfinger maintained a small lead over Jones, who remained in striking distance for a chance to pass the leader.

On Lap 23, Sheldon Creed tagged the wall in Turn 2 while battling for fifth but the race remained under green.

With five laps to go in the stage, Enfinger continued to hold a solid lead over Jones with Hill in third. Johnny Sauter was reporting a possible engine issue.

Both Crafton (engine change) and Camden Murphy (unapproved adjustments) had to start the race from the rear of the field.

NASCAR's Todd Gilliland to compete at Goodwood Festival of Speed

Roundtable: Who will be the next first-time winner?