Brett Moffitt on lapped trucks: "Half of them can't" race 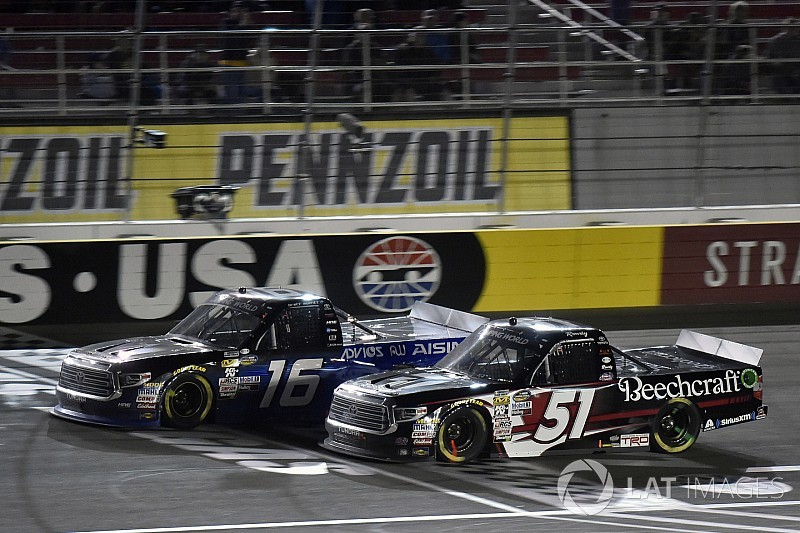 In fact, after the issues he faced in Friday night’s Stratosphere 200 at Las Vegas Motor Speedway, Moffitt would prefer racing more drivers like Busch than some of those he faced off with in the race.

“That’s fun racing with (Busch) because he can drive. Half of them can’t. It’s fun because I respect Kyle a lot with everything he’s done. It’s fun to race door-to-door with him,” Moffitt said after the race, in which he finished third.

“People don’t like him coming and racing in the Truck Series, but I love it, because being able to run with him there and learn off him is really good for my career and helps me out, so it’s a lot of fun.”

What wasn’t fun was the fact Moffitt’s chances at a second consecutive series victory were thwarted with run-ins with lapped cars twice in the final 25 laps – once while he was leading and a second time while he was trying to reclaim the lead battling with Busch.

The first incident involved Myatt Snider and Michel Disdier, the second involved Norm Benning – a driver who had been black-flagged by NASCAR earlier in the race for not making minimum speed.

“When (Snider) pulled out from the pits a couple laps down and side drafted us for the lead and it allowed Kyle to close in, I tried to go to the bottom of a lapped car (Disdier) and he turned down into us,” Moffitt said.

“It’s just frustrating because when you’re out of the race, you shouldn’t get in the way of the leaders. It’s just a bittersweet race.”

Moffitt’s victory last weekend at Atlanta locked his Hattori Racing Enterprises team into the playoffs and his third-place finish Friday has him second in the series standings heading into the next race at Martinsville, Va.

Still, he was eyeing a third series victory.

“It was just uncalled for,” he said.