One year ago, Brett Moffitt didn’t have a ride, now he’s a NASCAR champion. 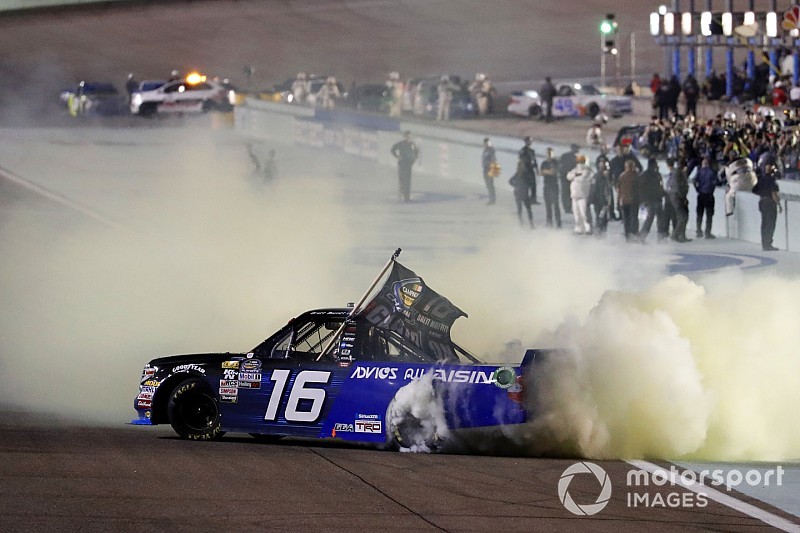 The title is the first for Moffitt and first for Hattori Racing Enterprises. The win was Moffitt’s sixth victory of the season, and seventh of his career.

Moffitt has not had a steady ride in NASCAR since 2015 and things looked no different heading into the 2018 season.

"That was the longest 20-30 laps of my life," Moffitt, 26, said in Victory Lane. "Man, I was just glad we could get to the white flag without a caution and clean sailing. We had a great truck all day.

"It's unreal. We all know the story by now. We didn't know if we were going to race this whole year. I didn't if I would have the opportunity to run for a championship even after we got our first win. Everyone pulled together hard here.

"We've had so many partners who came in at clutch moments and got us to the race track."

Asked about the battle for the lead with Noah Gragson, Moffitt said, "I just got my tires a little too hot the first time I got next to him and I probably didn't commit enough to the move. I kind of let them cool down and ran the top trying to get some momentum.

"He was kind of backing up and we could still run the bottom really well, which is kind of unusual for Homestead."

But at the last minute Moffitt was asked to take the helm of HRE’s No. 16 Toyota this year. Even though a full season in the Truck Series wasn’t guaranteed at the time, Moffitt’s performance helped keep the team moving forward.

“The accomplishments of the single truck team of Hattori Racing Enterprises and Brett Moffitt this season are something that will be celebrated within the walls of Toyota," said Vinay Shahani, vice president of media, motorsports and incentives for Toyota. "Moffitt and his team quickly became front-runners with their win at Atlanta and never let up, advancing to Homestead and winning the championship in what has become a dream season.”

With 50 of 134 laps left, Gragson held a slight advantage over Moffitt as the two continued to battle side-by-side for the lead.

Gragson was able to expand his lead with 40 to go as Moffitt began to get a challenge for second from Enfinger.

With 36 to go, Moffitt got around Gragson for the lead as the two battled through lapped traffic. Gragson then elected to make his final pit stop on Lap 101, which triggered several others to make their final stop under green as well.

Once the pit cycle was completed on Lap 106, Moffitt led the way with Enfinger in second and Gragson back in third.

With 20 laps left, Moffitt held a more than 1.4-second lead over Enfinger, with Gragson still running in third.

After the race, Myatt Snider was named the series' Rookie of the Year.

After taking the lead early in the stage, Moffitt easily held off Gragson to earn the Stage 2 victory.

Following the break between Stages 1 and 2, Crafton was the first off pit road and took over the lead when the race returned to green on Lap 38. Gragson was second and Moffitt third.

Gragson quickly powered into the lead after the restart. On Lap 39, Crafton got back around Gragson to retake the lead.

With 20 laps to go in the second stage, Moffitt moved around Crafton to take the lead for the first time in the race.

On Lap 44, Gragson was able to pass Crafton and move back into the runner-up position and began to challenge Moffitt for the lead.

With 10 laps left in Stage 2, Moffitt held a more than 1.6-second lead over Gragson as Enfinger ran in third. Crafton was fourth and Nemechek in fifth.

Enfinger held off Gragson to take the Stage 1 victory, leading from start to finish in the 30-lap segment.

Moffitt was third, Nemechek was fourth and Crafton ended up fifth.

Enfinger took early command of the race and held an almost 2-second lead over Haley by the end of the first 10 laps. Gragson had moved to third, with Moffitt fourth and Sauter dropped to seventh.

On Lap 14, Gragson made his way around Haley and into the runner-up position behind Enfinger.

With 10 laps remaining in the first stage, Enfinger held a 1.5-second lead over Gragson as Moffitt moved into third. Nemechek was fourth and Haley ran in fifth.

With five laps to go, Enfinger maintained a solid lead over Gragson as Sauter dropped to 11th in the running order.

After Daytona win, Austin Hill "not chasing anything but wins"