MADISON, Ill. – NASCAR’s return to Gateway Motorsports Park under promised but over delivered.

And at the end of 160 laps, Darrell Wallace stood victorious in Victory Lane for his second career Camping World Truck win.

“It’s huge,” Wallace said of winning a race for his dad on Father’s Day eve. “I’m going to take back everything I bought him at Dick’s (Sporting Goods) the other day. This is his present right here.

“It’s awesome. I was trying to figure out what to get him and what’s better than this right here?”

Wallace, 20, led the first 62 laps then came to the pits. When the team had issues with a loose wheel, Wallace dropped to 12th and had to battle his way back through the field. By Lap 80, Wallace moved up to sixth and then gained a spot over the next 10 circuits.

Patience was the key for Wallace as he worked his way back to the front as the race fell into his hands at the end. 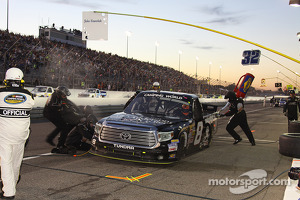 John Hunter Nemechek cruised to the lead on Lap 63. He led 53 of the first 133 circuits before his truck broke away and he slammed into the wall in Turn3. He finished 15th.

Matt Crafton took the lead from Nemechek twice – on Lap 67 for 10 circuits and again on Lap 121 – but it was short-lived. Coming around Turn 4 he blew his right front tire and slammed into the wall. Crafton was scored 26th and relinquished the point lead to his teammate Johnny Sauter.

Wallace’s Kyle Busch Motorsports’ teammate Erik Jones moved to the point on Lap 122, but German Quiroga punted him coming out of Turn 3 and the No. 51 Toyota’s night ended on the backstretch.

“We got dumped, the second time it happened this year,” said Jones, who was scored 23rd. “I don’t know what we have to do to change it. I felt like we had the winning hand at that point. I just needed clean air all night. We finally got it. I thought we were going to drive off after that.

"Unfortunately, the 77 had to take it away from us. It’s a shame. We had a good Toyota Care Tundra all night. We fought hard, made good adjustments. We really, really worked hard at it, it’s a shame to have it taken away that quick. I’m glad our teammate could hold him off and at least keep him out of Victory Lane and bring home a win for us at KBM. We’ve just got to move on and make things better.”

Quiroga, who called the incident “unfortunate”, felt that Jones over drove the corner.

“He drove very deep into one and two and he was sideways on the way out into the corner,” Quiroga said. “He started running towards me and I had the 54 really close. If you lift everybody is going to be wrecking. It’s unfortunate. I don’t like to finish like that but it was good for the Red Horse Racing team to finish second and third.”

With four laps remaining, Wallace had a sizeable jump on the restart and extended his lead to 0.329-seconds at the finish. Quiroga, Timothy Peters, Johnny Sauter and Ron Hornaday Jr. rounded out the top-five. 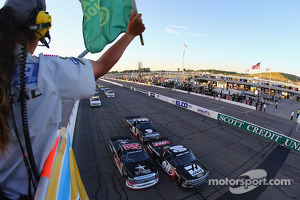 Wallace, who compared the track to Martinsville the site of his first truck win last October, was surprised that he ran nine races between victories.

“They said the next one would come easy,” Wallace said. “(Crap), what’s it been? Eight, nine races?”

Still, two wins in 29 career truck starts is nothing to complain about. And with his first win of the season out of the way, Wallace, who moved up to ninth in the truck point standings, can use the victory as a team building experience. 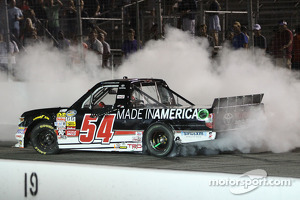 “To have the troubles that we’ve had and to keep our cool about it then just come out and put on a dominant show like we did today, shows a lot of what we have back at the shop,” Wallace said. “We’re down but we’re not out of the fight, that’s for sure.

“We’ve come out here and have been ahead of the ball since we got out here. Then to come through what we came through with the pit stops and then having to come back up through the field for the final restart – for them to keep me cool and keep the whole team cool – it shows a lot of what we can do later on down the road. I feel like we’re headed up. We finished 10th at Texas and now we’ve got us a win. It came a lot earlier than Martinsville, so I’m happy about that.”

Continuing education: Nemechek moves to the head of the class

Ty Majeski not only got his first NASCAR Truck Series victory but the opportunity to compete for the season championship as well.

Sammy Smith got one ARCA win Thursday night at Bristol (Tenn.) Motor Speedway but came away with a pair of titles.

While of the biggest additions to the 2023 NASCAR national series schedules have already been revealed there were a few surprises announced on Wednesday.

John Hunter Nemechek passed Carson Hocevar on the final lap to win Friday night’s NASCAR Truck race at Kansas Speedway and advance to the second round of the playoffs.