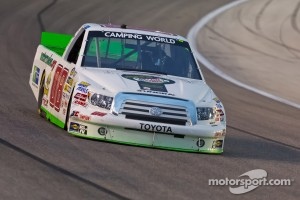 Ross qualified fifteenth in the 36-truck field in the afternoon qualifying session with a lap of 15.93 seconds at over 120.43 mph on the high-banked half-mile speedway. At the drop of the green flag Ross made a quick charge toward the top-ten before settling the Melon 1 Toyota into fourteenth where he held ground for the first fifty laps before dropping to sixteenth just before the first caution of the UNOH 200 on lap 83.

Every truck took advantage of the first caution for four tires and Sunoco racing gas and through several quick cautions failed to pick-up any track position while trapped deep in heavy traffic on the newly re-surfaced concrete track.

Chastain’s near misfortune actually turned into his biggest break of the season when Miguel Paludo got loose and spun. With Paludo’s Chevy crossed-up in the middle of the track, Ross jumped hard on the brakes and barely nudged the No. 32 with his right front fender.

Things looked bleak for the rookie driver from Florida as all four tires on his Melon 1 Tundra were flat spotted and Ross was forced to come to the attention of the SS Green Light Racing crew for four fresh Goodyear tires. After the stop, instead of starting within the top-fifteen, the No 08 was relegated to the last truck on the lead lap restarting nineteenth with less than fifty laps remaining in the 100-mile sprint.

Things quickly turned-around for the Florida farmer; Chastain took advantage of his fresher tires through several late restarts and effectively used the high grove to pass nearly a dozen trucks over the final quarter of the 200-lap race and found himself in sixth place for the final restart with just two laps remaining. Surprising both Brad Kesolowski and Ty Dillon sputtered out of fuel as the green flag flew and Chastain took advantage of their misfortune to power the Melon 1 Toyota to his career best third-place finish behind fellow Toyota driver Timothy Peters who led every lap earning his second victory of the season.

"Bryan Berry gave me an awesome truck tonight and it took me about 120 laps to figure out how I needed to run it and to move up to the lanes I needed to," an excited Chastain said following the race. "I can't say enough for the SS Green Light team and Melon 1 for sticking behind me. It 's been tough; we've had some tough races this year for sure but the whole watermelon industry is behind me and we are looking to run the whole year, but we still need some more help."

"This is how we should run; top-ten, and we came here expecting to run like this... We had some lap times comparable to Timothy there at the end. I can't say enough about this watermelon Toyota."

The third place finish was not only Chastain’s career best, but matched the best finish ever for the SS Green Light Racing team equaling Chad McCumbee’s 2009 finish at California and David Starr’s third place run at ORP last season.

Ross moved within sixteen points of the top-fifteen in the NCWTS point standings after nearly dropping out of the top-twenty-five just eight races ago after several mechanical failures. Chastain and the SS Green Light Racing Team will next race on August 31st at Atlanta.